Lorraine Tady and the Saturation of Vectors 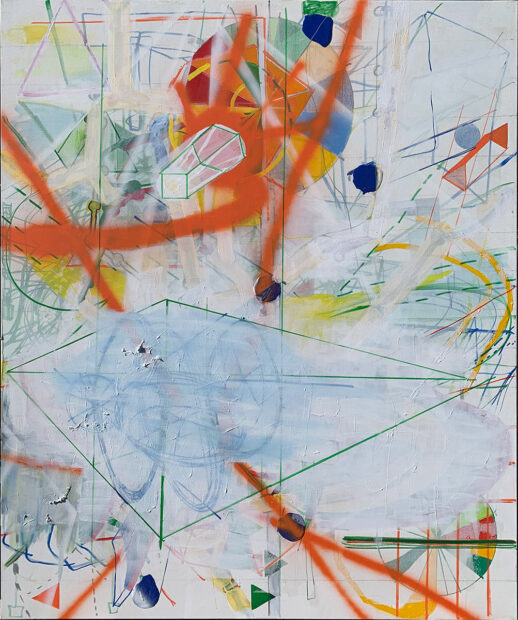 The University of Texas at Dallas professor’s fierce lines and rabid colors cooly embrace the rectangle, and fire visual ideas at the brain like a cyclone blasting cherry tree buds in spring. And I’ll go ahead and say it: Tady “paints like a man.”

Don’t shoot me, PC pals, and hang on ’til we’re through.

Because Tady has heard this often. 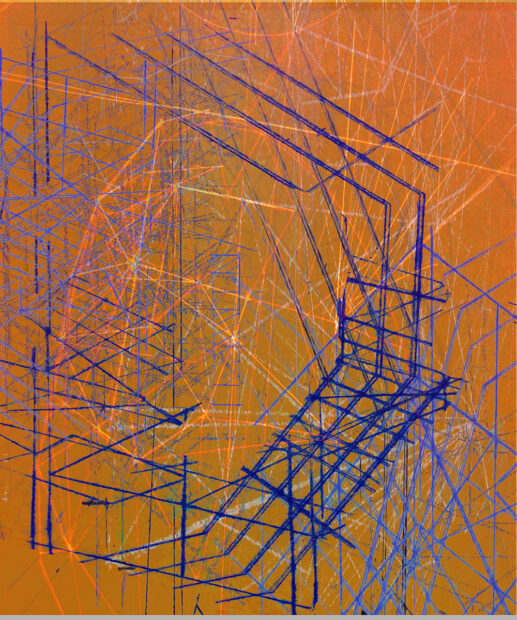 Her works have a masculine edginess. They delight in boundary-making, visual systems, and penetrating line. You’d be hard-pressed to find anything curvaceous in her work. But her personality offers a consistent counterpoint to emotions these formal investigations conjure. Deeply empathic and sensitive, there was an easy joy in threshing ideas about art and life with her as we sat down to coffee on a cold afternoon before Christmas.

Tady shows with Barry Whistler in Dallas (most recently in February of 2020), but she’s hugely productive and maintains a thick exhibition schedule within and without the Lone Star State. 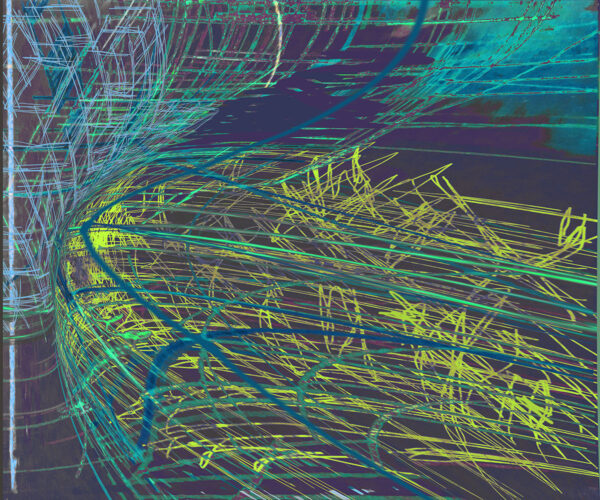 Currently, you can see her work in three group shows, two of which are virtual. She’s got one piece in the traveling exhibition Multilayer Vision 20/20. This curatorial tour de force (50 art stars!) is now in Soest, Germany, at the Museum Wilhelm Morgner, but motors on to three other sites:  The Mecklenburgische Künstlerhaus in Plüschow, Germany; the Tremenheere Sculpture Gardens in Cornwall; and the Vasarely Museum in Budapest. All this town-hopping extends through 2021. Her two virtual shows are more “local.” Orth Contemporary of Tulsa has four of her works in its 10-person Hope Made Visible presentation, and the DFW-seeded Pandemic Faire drops a splendiferous cache of 14 Tadys on us, broad in size and volatile in color. 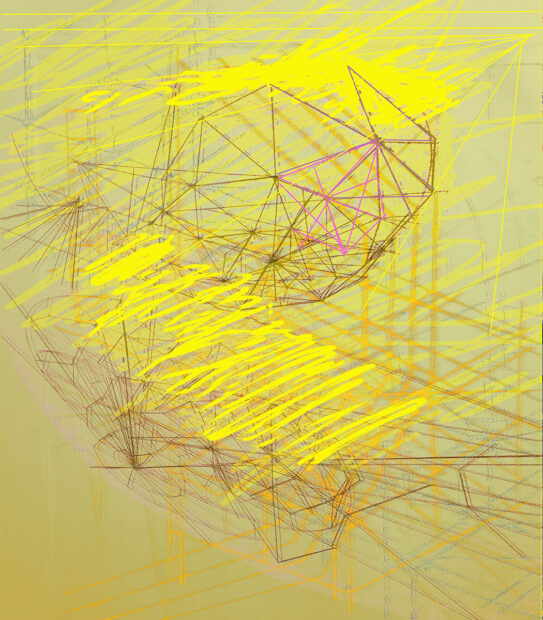 Like her friend and fellow UT faculty member, John Pomara (who I profiled in December), Tady pursues an enthusiastic dialog with Adobe Photoshop, large-scale digital prints-on-canvas, and the inestimable gifts of the dot-matrix glitch. Her means are more painterly than his, however, and we joked earlier that day (as cold air moved with icebergian certainty through the wholly open roll-door of her studio) about her discomfort with the term “computer-aided design.” It’s not like this artist needs any “aid” from a machine.

I reflect on this. Do we say pre-digital paintings arise from “brush-aided design?”

“It’s more like you’ve made the computer your bitch,” I offer.

She rolls her eyes.

It’s a trend for artists to work in many mediums and to hire others to flesh out their ideas. The results can be interesting and valuable, but can leave many of us hungering for a developed praxis in a single format or medium. Some kind of soul conversation comes out of such efforts.

For me, this is more aesthetically satisfying than a perky conversation about art, politics, or personal hygiene set in motion by throwing found objects on a floor. An artist whose formal ideas grow alongside their skill is hunting meanings beyond the topical — and, for what it’s worth, telling Duchamp to fuck off. Art materials make confining demands on such people — ones they willingly bear. The expression they arrive at is hard-won. It supplies awe. It inspires my respect. Such artists make paint, plaster, or sheet-metal sing. 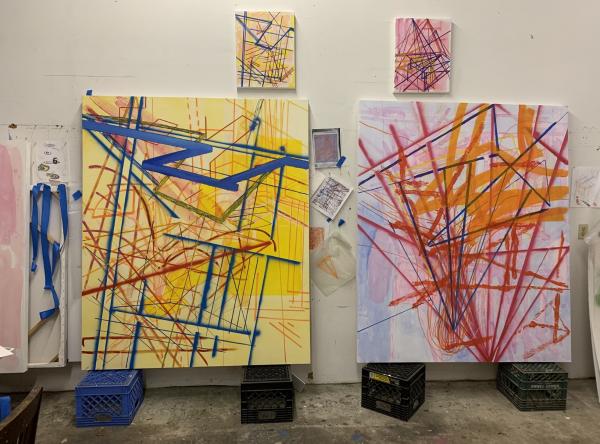 What comes of it? Some really awesome rectangles.

Tady works with a looping approach, starting the manifestation process by designing images in Adobe Creative Suite, or through a drawing or painting. At some point, she’ll extract the image from the computer via printer into an analog state or bring it back into digitalia via photograph — then work on it some more. She repeats this process up to six times. This has neat implications for bridging the visual vocabulary gap with a new generation of gallery goers.

We all know painting is a fabulously old method of artmaking, but it still cries out to us. Reports of painting’s demise are constant and, apparently, exaggerated. The art consistently creeps back from the grave, pasting on old and new chunks of flesh, and discovering fresh ways to appeal to the present generation of art makers and viewers. 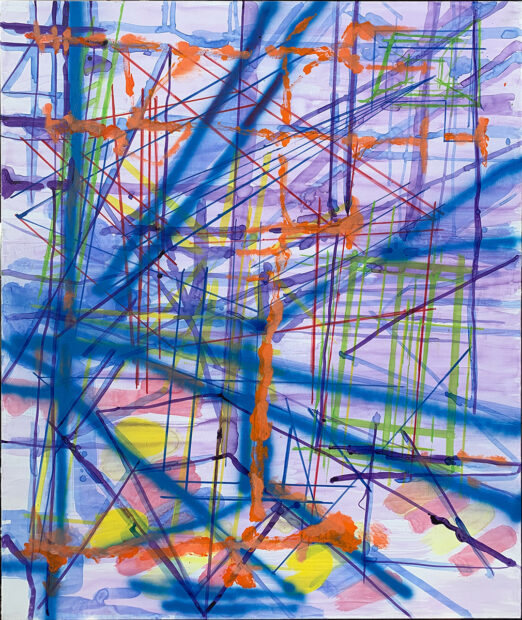 Tady is at the bleeding edge of these transformations, and both her imagery and method re-animate the art. That said, even within her novel means, there’s classicism in what she executes. She isn’t pasting 7000 butterfly wings on a tarp, or puking paint with a spinner. Artists have always formulated drawings from their own paintings, painted from their own drawings, and followed various switchbacks among painting, printmaking, and photography to create finished works. Tady is doing more of the same — albeit with algorithmic media. But, again, like John Pomara, she’s not drawn to making things only for on-screen consumption. In fact, she’s never exhibited anything that’s “LCD-only.” Fabricating stuff that sticks to walls, whose movement isn’t actual but implied, compels Tady because a dramatically receptive embodiedness compels her. She wants her art to hold conversations with crowds under low-fi conditions of shifting light and changing object-relations in a room. She wants an artwork to be calmly self-subsistent. Pigment on canvas operates without a power cord. With a bit o’ sun, attention from the viewer is the only “on-switch” it needs.

Always a fan of the close view of a work of art (and laying my hands on ‘em — I bring some small purpose to a museum guard’s day), minute investigations of Tady’s paintings reveal not just faux facture (a consequence of color ink-jetted onto a canvas) but also pixilation. A member of the Gen Z or Millennial crowd can cuddle close with a Tady, getting the some of the warm-fuzzy I get from gawking at my apartment’s faux-wood floors made from “thermo-setting plastic.” These youngsters grew up with their faces pasty from LCD monitors and are as at ease with pixilation’s craquelure as Daniel Boone was with treelines. Tady’s high-brow production throws a bone to the hoi-polloi with this and other elements. Like Millet tossing field hands into his pictures, or Warhol bringing Brillo Boxes, a Tady says. “Hey y’all! Here’s some forensic evidence of your everyday life!”

But she meets the viewer on so many levels.

As we talked that day, she searched for words to express her interest in the furrow and field, the wet and dry, and the animality in an artist’s line. Subsequent phone talks brought out the inspiration behind her sharp turn toward color experimentation in 2009. Before that, her shades drew on tint-structures known from 1980s Neo-Expressionism and 1950s Ab Ex.

Where she’s arrived blows my circuits. Her palette has the range, saturation, and richness to compare favorably with that of Nina Chanel Abney, Jules de Balincourt, or Karen Kilimnik. Maybe her hues are so alive because they’re impelled by autobiographical reference, guided by decades of experiment, and boiling with the hot blood of theory.

In our talks, she directed me to a large band of theorists — Philipp Otto Runge and his Color Sphere, Goethe and his Theory of Colors — both from 1810 — Malevich’s Suprematist Palette of 1915, Wittgenstein’s Remarks on Color from 1950, Johannes Itten’s Elements of Color and Joseph Albers’ The Interaction of Color — both from 1963 (more than enough color speculation to overfill an artist’s cup). 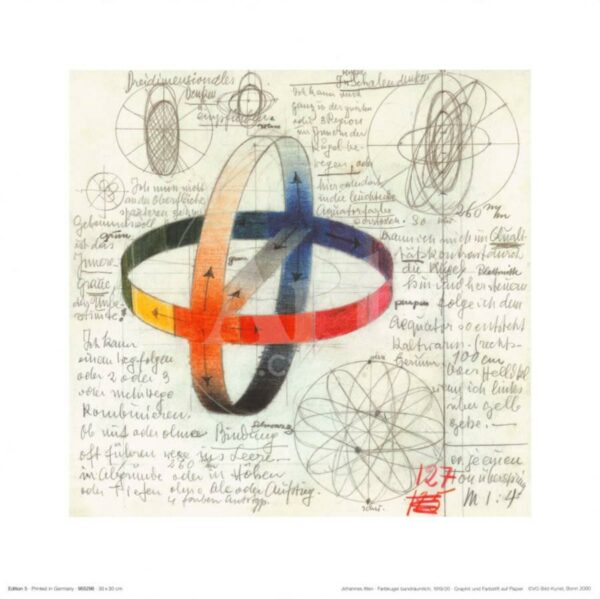 We discussed the phenomena of synesthesia, Navajo, Cherokee, and Aztec ideas of colors resting in the cardinal directions, the I-Ching’s hue system, and the Hindu designation of redness with life itself. Tady is particularly responsive to the color mysticism of the Theosophical Society (first diagramed by Annie Besant and Charles Leadbeater in their 1901 book, Thought-Forms) which are now all the rage in the rediscovered work of the early-20th-century’s Hilma af Klint. Tady has exceptional excitement for Theosophy’s emotional assignations along the hue spectrum (recognizing that “radiating affection” is the feeling band of magenta-pink, for example). This gives specific weight to our understanding that any color, image, or object in a space affects the emotions of the people inhabiting it. As Wright said about the crafting of spaces in another context, “We create our buildings, and then they create us.”

I recognize that this stock of knowledge and its sublimation into an eye’s intuition creates the muscle behind Tady’s color fields, but she took the conversation in a novel direction when she added: “A line has to be a certain color to work.” 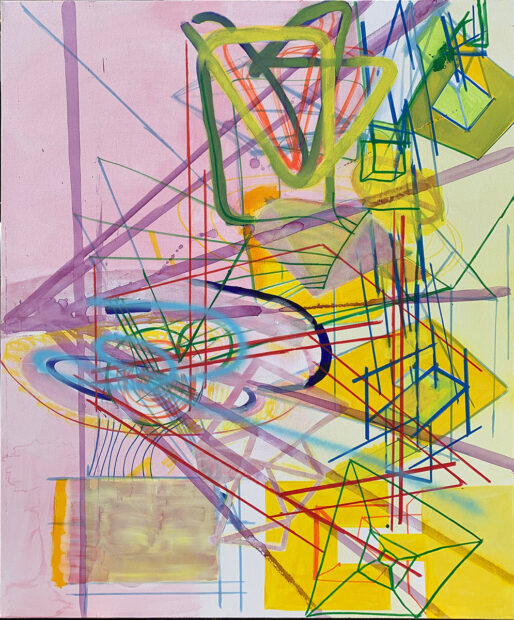 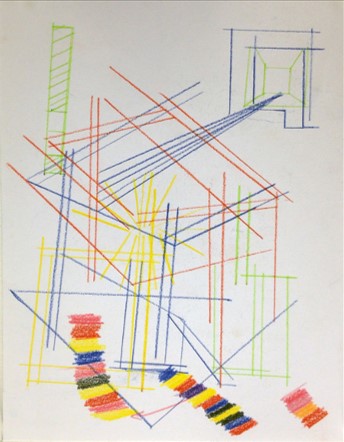 She mapped out the fact using her Mountain Source (2019—pictured here), saying, “What kind of attitude does a red or a blue line carry? Lines have identities — they’re destroyers, observers, boundary-makers, or life-givers. Different lines sit in different spaces and serve different purposes.”

Tady’s art is mostly about how hue operates within such “saturations of vectors” as the artist Steven Baris observes. Picasso mastered line while Matisse mastered color, and Tady goes some ways toward resolving that polarity. 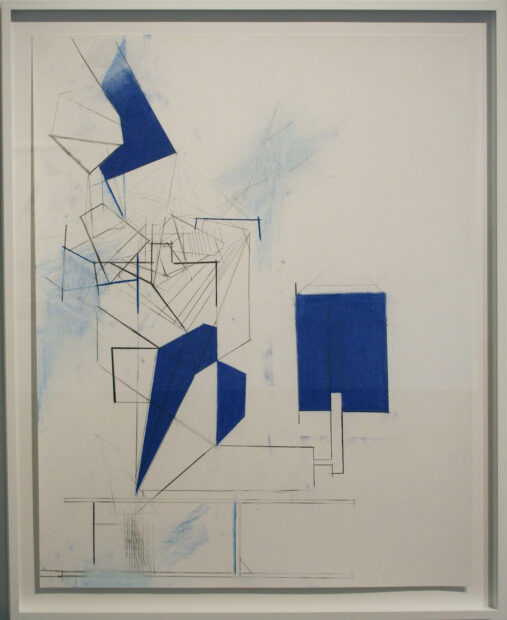 Cross-sections, blueprints, and orthogonal projections captivate her, but she sources her fascination for linearity outside of any architectural plan, Hilma af Klint, or Picasso. She shares memories of playing Ker-Plunk as a kid, and youthful experiments of floating balloon-tied, cheap plastic strawberry baskets in the midspace of her bedroom. Her mind can still replay the sight of taught telephone lines, repeating, pole after pole, as she stared out the TV-shaped side-window of her family station wagon as it rattled along.

Barnett Newman birthed his vertical “zips” in the patriarchal postwar, and their connotation with zippers, dicks, masculine angularity, buzz-bombs, bayonets, bullet-paths, battle-force thrusts, national boundaries, and the erect pose of military attention is pretty plain. Tady’s line can’t help but connote this, too, though one last childhood tale she tells yanks us off this potentially fraught line of gender classification toward another. 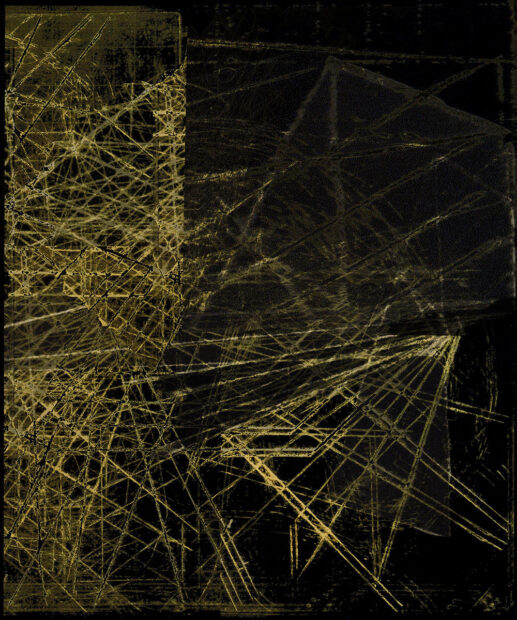 Besides the telephone wires, her young eyes beheld an annual birthday ritual engineered by her aunt that cross-hatched an entire room with ersatz spider webs. Gifts and gift-envelopes were hung in the threads (which looks to my mind’s eye like Tady’s Octagon Vibration picture, one of which is exampled here).

Tady recalls glorying in the whole dang mesh of it.

As much as Tady chocks screaming male vectors into her work, her lines also tangle, clot, and clutter space like webs — the putative symbol of the counterpoint to penetration. Webs talk of envelopment, receptivity, the Yin of the dark-wet-cold where they’re found, and the iconic black widow. Tady’s floating lines are feminine.

Tady paints like a woman; she paints like a man, and maybe she resolves these key polarities while spinning out canvases that dare to wrestle directly with the vector of painting’s lively, long, and soul-entrancing canon.

Thank you GLASSTIRE for your support!! I’m grateful to Glasstire that they value this time and insight with regards to Texas artists.

Virtual walk through of MULTILAYER VISION 20/20 and other included artists:
https://m.youtube.com/watch?v=aWi_FlHNeHY&feature=youtu.be

Also, my group show “Yes there will be singing. About the dark times.” at Jason McCoy Gallery, NYC has been extended https://www.jasonmccoyinc.com/

Enjoy! And everybody take care and go see some art!