True North: How Heights Boulevard’s Sculpture Installation Saved Me in 2020 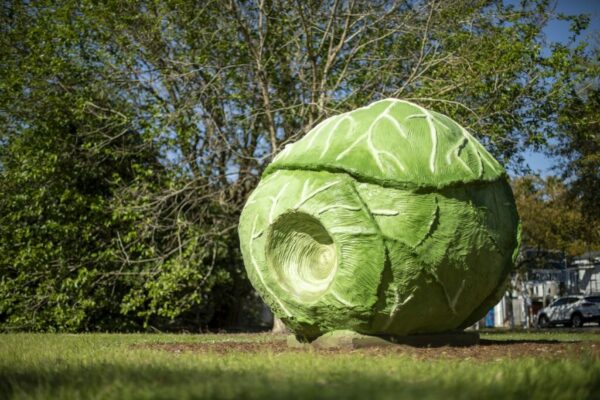 Note: This is the winning essay of the 2021 Greater Houston Glasstire Art Writing Prize.

My whole life I have been an “indoor cat.” As a child growing up in swampy southeast Texas, I hoarded books and cherished Saturday morning cartoons. Unlike my family, I had little interest in sports, minimal passion for wildlife, and zero tolerance for dirt. Now well into my 30s, I can say that one of the foremost privileges of adulthood is that nobody can stop me from spending my limited leisure time inside my apartment in Houston’s Heights neighborhood — cooking, crafting, reading, watching, and (too often nowadays) “doom scrolling.”

But when March 2020 rolled around, and the Covid-19 pandemic drove my professional and academic activities onto Zoom, I felt like Midas waking to the awful realities of wish-fulfillment. Restaurants morphed into delivery orders. Movie theaters shifted into streaming subscriptions. Bar crawls gave way to drunken group chats. Everything I had once touched turned into a safer-but-smaller version of itself, glowing with blue light and whispering into my headphones. I finally had the stay-at-home life I’d wanted, but — as the Greeks (and Chris Isaak) have been trying to tell us — it’s strange what desire makes fools like me do. One morning, two weeks into the hermit life, I went to the front door, noticing for the first time that the deadbolt was gold but that the doorknob was silver. I turned the knob and went outside.

For those unfamiliar with my neighborhood, its defining feature is the leafy Heights Boulevard esplanade that includes a gently winding, 1.5-mile walking trail. If you proceed southward from 20th Street, as I did that late-March morning, you will appreciate the sporadic shelter of trees planted and groomed by the Houston Heights Association (HHA). Volunteers created the esplanade in 1993, but the tallest live oaks clearly date back much further. Newer trees springing from beds of mulch are subtly intertwined with irrigation spigots. Each block of the esplanade is unique: some offer wrought-iron benches, others a fountain or a gazebo. At the northernmost end, you’ll find a Victorian rose garden. 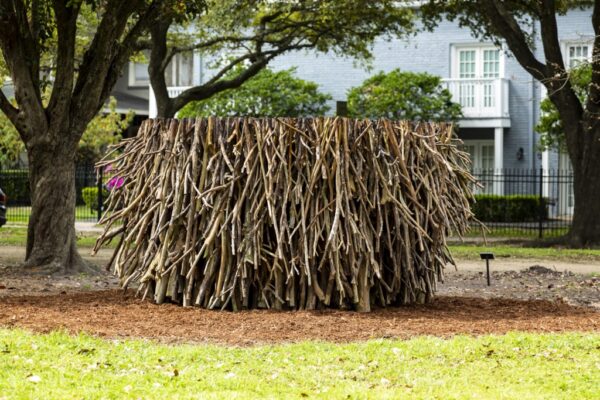 But what really adds a splash of variety — what elevates the esplanade from conventional to captivating — is a series of eight sculptures, with one installed every few blocks. These sculptures are replaced annually, with each new series on display from March to December. This past year, the exhibition was TRUE NORTH 2020, which included a 5,000-pound polymer cabbage by Bill Davenport called, fittingly, Big Cabbage; an aesthetically severe but environmentally conscious piece by Sherry Owens and Art Shirer called Carbon Sink, made from discarded crape myrtle branches; and El Gallo Monument, featuring primary-colored piglets and a giant junkyard rooster, which was billed as the late Bob “Daddy-O” Wade’s last sculpture. Of the eight artists represented in TRUE NORTH 2020, five were Houstonians, and all were Texans — facts that grew more significant as I began to guard my walk up and down the esplanade as a sacred daily ritual. In the depths of an intense and indefinite lonesomeness — not the playful solitude that I had coveted as a child but an unsustainable lack of human proximity — I had slipped, those first few weeks mid-March, into the false belief that I was more alone than I actually was.

“Installed this year in March just as COVID-19 was becoming part of our vernacular,” reads the HHA website, “the sculptures have become even more meaningful as people seek fresh-air activities and solace from the restrictions the pandemic has imposed.”

Even more meaningful. I love that. While I have often been in the position of defending meaning as a, well, meaningful value in art and literature — one that should not be so quickly dismissed as unattainable, nor debunked as pure Romantic myth — only recently have I come to see that historical, social, and biographical context enlarges meaning. Context, I maintain, does not alone make art. Artists do that. Personally, I cannot give up on romance without giving up on the whole damn enterprise. Context, however, can make more legible the meaning that artists like Bob “Daddy-O” Wade put into their work.

“I think I would rather be a painter, but I am not,” wrote Frank O’Hara in a poem that reminds us that paintings are made of paint and not words, and that poems are made of words and not ideas. It is fair to ask why we need to be reminded of something so obvious. Well (to use one of O’Hara’s favorite words), the question of what an artwork means, as I’ve learned by eavesdropping on conversations around Davenport’s Big Cabbage, is both primary and peripheral.

“But what does it mean?” is almost always the first question someone asks when presented with a perplexing artwork, before they look around for a figure of authority who can answer. Based on anecdotal evidence, I’d venture that these “authorities” rarely have the faintest idea, which is why they overcompensate with dazzling language. The fact remains that a giant polymer concrete cabbage cannot tell you what it means; it can only be what it is.

As an undergraduate I worked the front desk at the university’s art gallery. Most days I pointed out the restrooms and sold a postcard or two. Often, on afternoons that crawled by with few visitors, I broke the rules and discreetly read a book, keeping an eye out for Annabelle. Each five-hour shift awarded me a 25-minute break when Annabelle would descend from her office and release me. A nice boss, Annabelle would often permit me to “take 30.”

Invariably, I spent those extra 10 minutes in “the sculpture garden” — my private, outdoor sanctuary. Walled off by vine-strewn brick, the sculpture garden had only one entrance (through the museum), one wooden bench (where I’d sit), and not very many sculptures (at most, three). The gallery’s interior, with its low ceilings and dim lights, made me feel vaguely oppressed. It was a place to visit, perhaps to linger, but never to live. Only the sculpture garden seemed a place one might actively choose to inhabit in solitude. Paintings as bright as the sky hung inside the gallery, but out here was the actual sky! 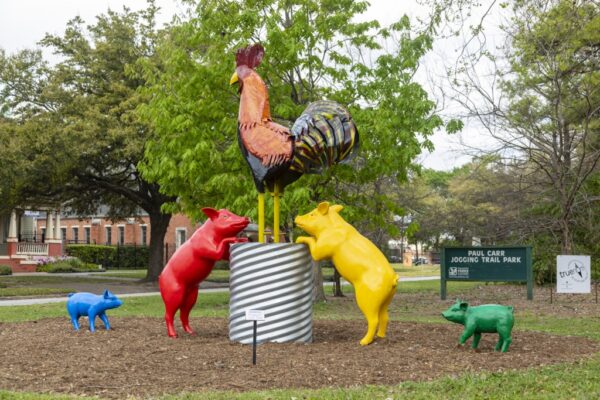 There is something simply spectacular about spaces that draw solitary introverts like me out into the world — not for any purpose, really, but for the splendor of fresh air, the excitement of a brisk walk, the wannabe escapist’s nearly choreographed fantasy of throwing open a door and practically dancing under a sky of any color, with trees of any type and size. To have rediscovered in this outdoor paradise a love and passion, not just for the thing I needed but the thing I hadn’t realized how badly I’d missed, was a gift. What brought me out of my mausoleum was the work of artists who are my neighbors, my fellow Houstonians and Texans, all of whom were somewhere once, when they sculpted these whimsically oversized vegetables and painted these Crayola-colored pigs. To think that they must be somewhere now, too: the sheer mass, volume, and density of their sculptures stand as a testament to the fact. Words get written and disappear again until they’re read. Matter matters.

I think I would rather be a sculptor, but I am not.

thanks for the stroll through your neighborhood of art and related thoughts Justin. Well written and Welcomed on this below freezing morning!

Loved this. Thank you and Congrats!