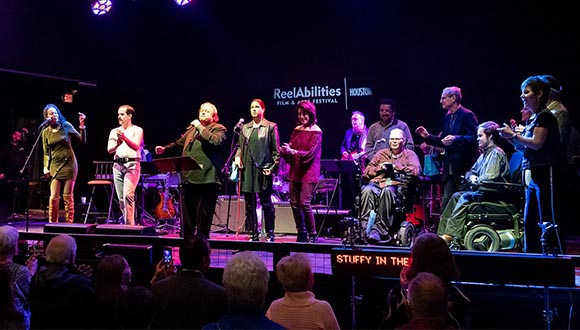 The ninth iteration of the ReelAbilities Houston Film and Art Festival has been announced. The 2021 event, which takes place February 16-24, will be a virtual experience featuring 16 award-winning films, as well as the ReelPeople: UP Abilities speakers event, the ReelMusic concert, and more. All art, film and music events will be free to the public.

Produced annually by the JFS Alexander Institute for Inclusion in collaboration with Houston’s Mayor’s Office for People with Disabilities, ReelAbilities has also announced the chair and co-chairs for this year’s festival. They are Benjy Hershorn, Chair, and Eve Lapin and Marcy Margolis as Co-Chairs, who will be working with more than 100 volunteers and partners to reach the festival’s regional audience and, with the festival online, many others beyond Harris County.

Says Hershorn: “People living with the challenges of disabilities, both visible and invisible, all have compelling and valuable stories to share. By hearing those stories, we learn empathy and gratitude; barriers come down and our minds are opened to new possibilities. That is the essence of ReelAbilities.”

“Known as the most innovative ReelAbilities Festival globally, ReelAbilities Houston will continue to showcase impactful film, art and music events in a new virtual format,” says Lapin. “The virtual format of the 2021 Festival will allow people of all ages and abilities to experience the beautiful palette of events we have to offer.”

Says Margolis: “During the process of planning ReelAbilities Houston 2021, I have greatly enjoyed meeting a diverse array of individuals who have accomplished so much despite facing barriers to inclusion and stigma related to living with a disability. I am incredibly excited to continue learning from community leaders and spreading awareness for ReelAbilities.”

For more about the ReelAbilities Houston Film and Art Festival, please visit its website here.

Founded in 2007 in New York, and now presented in 17 cities in the U.S., Canada and Mexico, ReelAbilities Houston is made possible by city host, The JFS Alexander Institute for Inclusion and produced in collaboration with the Mayor’s Office for People with Disabilities; founding partner TIRR Memorial Hermann; Cornerstone Home Lending Inc. and Joan and Stanford Alexander, lead sponsors; and the support of foundations, corporations, individual and in-kind sponsors.