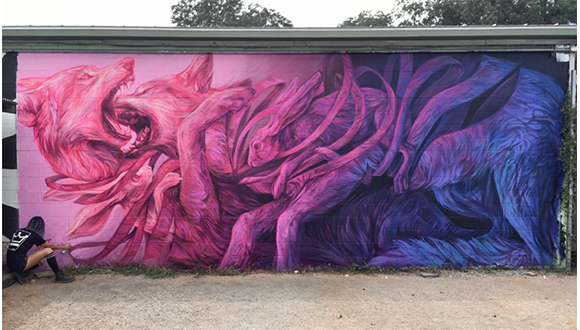 Artist Emily Ding has been selected by Fort Worth’s Artspace111 to create a mural on the gallery’s downtown building facade. The mural open call was announced last October. “We received an incredible selection of amazing applicants for our open call and had the hard task of choosing just one Texas artist to add their voice to the landscape of Fort Worth,” the gallery’s statement reads.

Ding’s work is characterized by large-scale animals and figures, and her murals exist as part of the Harrisburg Mural Festival in Harrisburg, PA; in Austin; and as far away as Shanghai, China.

Ding will have a total project budget of $8,000, including supplies, equipment rental, and artist stipend. Ding will be receive half of the funds at the beginning of the project, and the remaining half when the project is completed. Artspace111 will retain copyright of the mural.

Ding’s mural will join others in the Fort Worth cityscape, the most notable ones being the Richard Haas Chisolm Trail mural in Sundance Square, and the Stuart Gentling and Suzanne Gentling Untitled (Zipper Mural) on the south end of downtown Fort Worth. The summer protests of the police killings of George Floyd and Atatiana Jefferson, as well as street demonstrations calling for an investigation of the death of Vanessa Guillen, all became inspirations for the new mural movement in Fort Worth, which Glasstire has been on top of.

Ding’s commission is scheduled for completion this spring. For more information on Artspace111, please visit its website here.