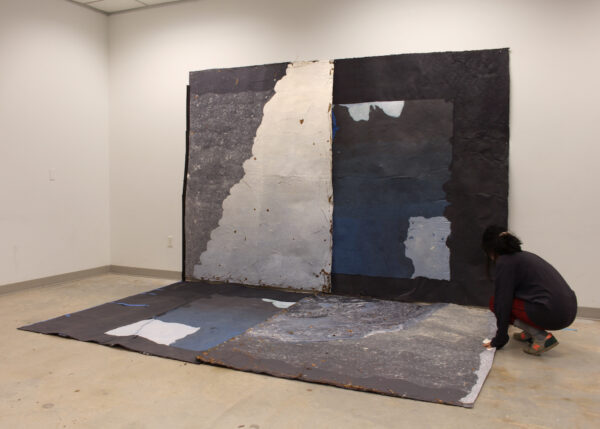 My first conversation is with Hong Hong, an artist currently in residence at the Houston Center for Contemporary Craft. Hong’s layered, expansive paper artworks are the result of her outdoor papermaking process, where nature, time, and weather embed themselves into the surfaces of her creations. With their massive scale, crepuscular colors, and titles taken from ancient Chinese texts, Hong’s works evoke a sense of wonder and a touch of the sublime. Here we talk about her origins, her unique take on papermaking, and how Houston humidity has quite literally shaped her recent works. 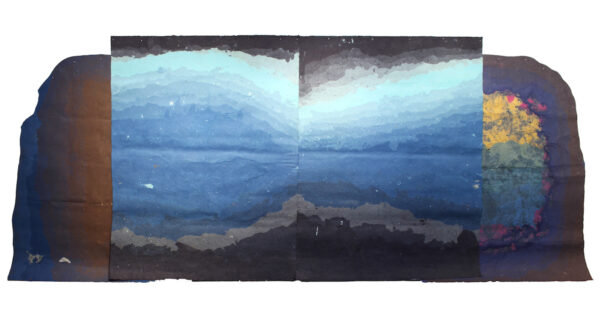 Lauren Moya Ford: Tell us a little bit about your background. Where are you from? How did you come to art and artmaking?

Hong Hong: I was born in Hefei, a metropolis in central China. As a child, I didn’t go to school much because I was pretty sickly, so I spent a lot of time at home drawing. Back in the ’90s, paper wasn’t as readily available in China as it is now, so I drew on whatever I could find: my dad’s notebooks, the pages of my mom’s novels, newspapers, and paper scraps that my grandmother would bring me.

I drew at such a rapid pace that I kept running out of substrates, so I started doodling on the walls of my parents’ house. The activity wasn’t really encouraged, but it wasn’t discouraged, either. From the age of three to ten, I had favorite wall areas that I would draw on again and again. Those spaces were so dark with graphite and crayon that they were black and shiny. Eventually the entire house was covered in my drawings.

I stopped drawing on walls when we immigrated to America, but I continued to make things. Since coming to the States, I’ve lived in North Dakota, Washington, New York, and Connecticut, which is where I started seriously making paper in the way that I do now. 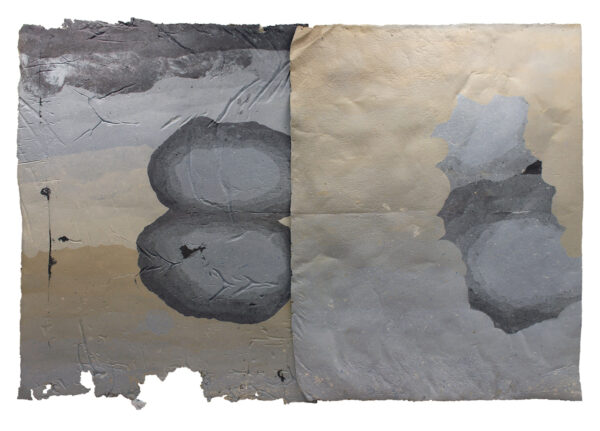 LMF: How did paper become the protagonist of your practice?

HH: I have early memories of going to the temple with my grandmother on every Chinese New Year, where there was a tree inside the temple. We would get holy paper from monks, and my grandmother would write down our wishes on the paper and pull down a branch of the tree for me. I would tie her wishes to the tree for the upcoming year. So from a young age, I was exposed to the idea that objects are not necessarily always what they are, and that they can be imbued with meaning through action.

In graduate school, I was making large-scale paintings on canvas but I was dissatisfied with the immediacy of mark making, and I was tired of seeing my own hand move across different surfaces. I was also disconnected from the history of oil painting — which I had learned primarily through a Western perspective — and I didn’t know where I could exist within that plane. While I was having this sort of crisis, paper found its way to me through chance. I saw these beautiful translucent objects in the school’s hallway, and was immediately drawn to them. The material came forward and just asked to be touched or formed.

What I really love about making paper is that I can feel something rising up against me. This thing that I am pushing against has its own weight, density, integrity, and will. At the same time, I want to be accepted by this thing that I’m dancing with. There is a simultaneous sense of aliveness and absorption as well as alienation and belonging. These states continuously fluctuate and intersect during different parts of the paper formation process, but you go through the same set of steps every time you make paper. It’s a ritual, like the mundane habits that rise out of convention, but it’s also like intentional acts of devotion like going to the temple with my grandma for prayer. 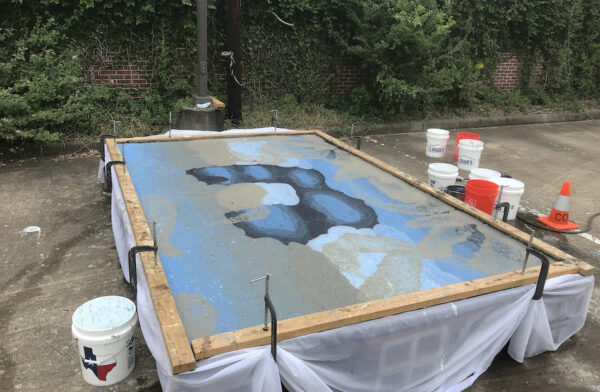 HH: I work outside in the summer and fall on a structure called a mould and deckle that measures 12 x 8 feet. The dimensions reflect the distance that my body can travel without losing control of its balance, and are therefore directly related to the length and flexibility of my own appendages. I understand my body’s movements, and its smallness in relation to the space where I work and in relation to the body of the paper. My modular mould and deckle can be built quickly and set up on any kind of surface — soil, parking lots — and my paper is made with repurposed pieces of construction paper, napkins, and paper towels, as well as tree bark. 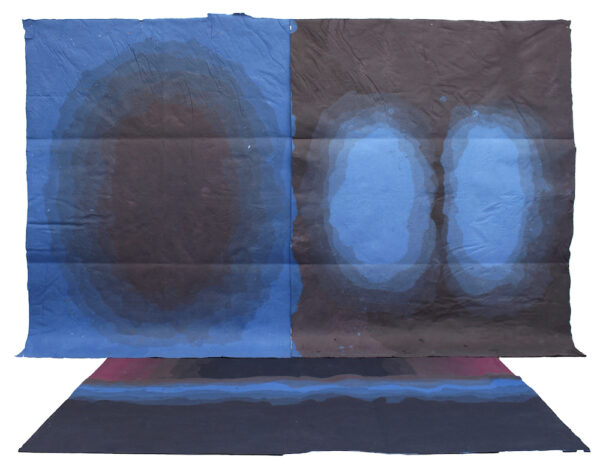 LMF: We usually encounter paper as something small that we can easily hold – books or newspapers, for example — but your works are often wall-sized. Why do you work at such a large scale?

HH: The large scale that I’m drawn to probably has to do with my experiences of drawing on walls: that relationship between body and surface is very similar to what I recreate in my papermaking process. I wanted to be able to work at the scale that I was interested in, even if it’s not practical. So I moved outdoors because no matter how big the object is, the world is infinitely bigger.

Some of the ideas I was initially exploring had to do with the idea of mobility because my parents and I spent a long time moving from place to place. Nowadays I think that the terrestrial journeys that I take across the land to make paper in different locations are attempts to try to reimagine my own border crossing and immigration, which was difficult for many reasons. I want my work to provide a different set of experiences or a gradient of emotions that could also be related — even if it’s just in my mind — to that process of moving from one continent to the next. 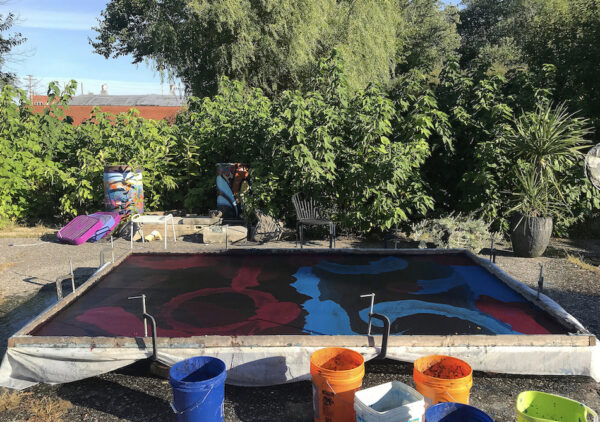 LMF: How does nature factor into your work?

HH: After my family eventually settled in upstate New York, I spent a lot of time hiking through the woods in the Adirondacks. The forest shifted so much from one season to the next, and those experiences of walking by myself through the woods were really formative to my interest in how the landscape around an object behaves over the course of a day or even a year.

Because it sits outside, the paper I make is really a photographic still of what’s happening within the environment: the body of the artist, the sky, the land, and the sun. All of these elements are physical, but they’re also abstract in that they can be understood cartographically, linguistically, historically, and mythically. The surface of the mould and deckle is where I believe some of this exchange can occur. The paper itself is a body of its own, where bodies of objects can touch and collide. My work also changes with time and the seasons. I’ve been very lucky to be able to set up in the garden of the Craft Center, where my recent works are covered in leaves because all of the trees shed their clothes in the winter. 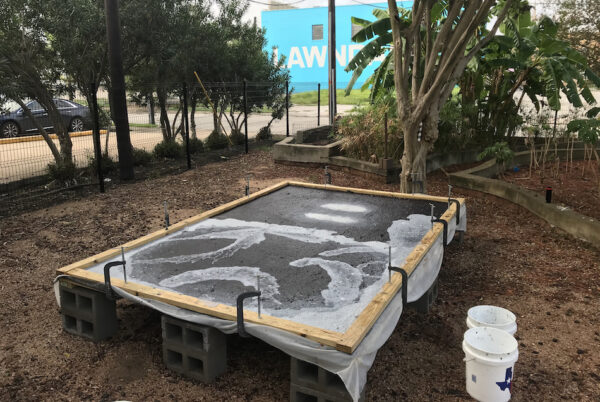 LMF: It seems like you work from a position of reverence for nature and its cycles.

HH: In general, I don’t believe in a hierarchy between material and animal entities. The inanimate is born the same way an animal is: openness to touch is the first condition of our creation. Mammals form inside the womb where we are touched by the weight of our mothers who carry us. Landscapes are forged with heat and pressure, and are touched by fire, weather, and time. I think that we all retain this malleability throughout existence. So a boulder, a mountain, a sheet of paper, and a human all accept and absorb gestures of tenderness, neglect, and violence. And in this way, we become marked over time. This porousness or malleability leads to stability and then eventually to demise. I think that there is a certainty to form that’s really beautiful, because through this process of forming and being formed, all things engage with the act of writing their own histories. 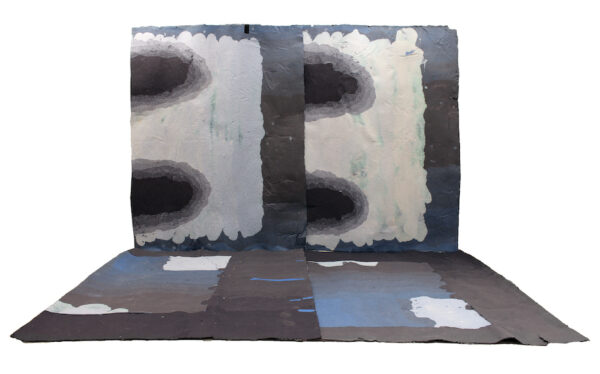 LMF: How has your work changed since coming to Houston?

HH: I arrived in Texas on the same afternoon that Hurricane Laura did. The storm was beautiful and terrifying, so my immediate impression of Houston was that it’s a place where the land meets the ocean and the air, so there’s a lot of sort of turbulence and maybe even violence.

Water is so present here in the form of humidity, flooding, rain, hurricanes, and other weather. Water is also a vital part of papermaking, but it has to evaporate completely from the fibers for paper to be paper. Otherwise, it’s just a gooey pulp. Paper remains susceptible to the presence of water throughout its entire life. If you hang a dry sheet of paper in a really humid room, the water enters the paper and forms sweat stains. And if enough humidity enters it, the paper will fall off the wall, deteriorate, and return to the materials that went into making it. Coming to Houston showed me that the objects we make remain, at least in part, within this active space of formation.

In the North, the surface of my paper sheets are all really smooth because the paper is able to dry within the day. But when I was first making paper in the garden, I remember the paper just refused to dry because there was so much wetness in the atmosphere. I’ve had to move a lot of wet sheets of paper from the surface of the mold into the studio, and during this tumultuous process the surface of the paper becomes marked by dents, valleys, mountains, and plateaus. All of these marks come from this prolonged space of becoming. It reminds me of Aristotle’s comparison of the soul to wax, a soft material that’s capable of taking on the impressions of all that we experience. Since coming to Texas, that quality has been at the forefront of my mind as I work through the porousness of these objects.

This is so refreshing. Thank you!

I completely agree! So refreshing!