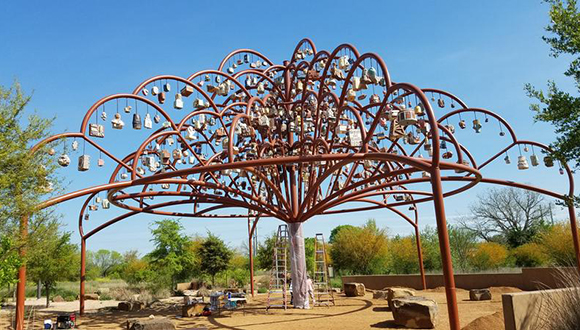 San Antonio contemporary art space Ruby City has organized a public art scavenger hunt as its first official program of the year. Opened in October 2019, Ruby City was only in operation for a few months before the onset of the pandemic forced it to shutter to visitors. Ruby City first developed the outdoor scavenger hunt concept last October to celebrate its one-year anniversary, offering prizes to the first few people to snap a pic of themselves in front of sites and publicly viewable works important in the life of the late Linda Pace, upon whose legacy Ruby City is built.

The latest interactive scavenger hunt, which kicked off on Friday, January 22 (it runs through Jan. 29), was organized by Ruby City to “celebrate San Antonio’s deep and ongoing connection to public art.” Its selection of nine works clings geographically to the San Antonio River, starting with a few public commissions near the river’s Museum Reach to the north, and ending in the south at Mission Reach with Margarita Cabrera’s Árbol de la Vida, an arched steel structure unveiled in 2019 that encodes local stories via 700 ceramic ornaments sourced from the local community.

Elsewhere on the South side, hunters can track down Dream Song Tower, a 2018 piece by well-known Texas artist Cruz Ortiz, which incorporates references to local folk tales, like that of the Donkey Lady. The scavenger hunt also includes important community works from the West side, such as Jesse Treviño’s La Veladora of Our Lady of Guadalupe, a three-story-tall votive candle sculpture next to the Guadalupe Cultural Arts Center.

“Including some works that are well-known and others that are new or off the beaten path, this program will give participants an opportunity to get out and safely explore their city and its contemporary cultural scene,” Ruby City says of the scavenger hunt, which concludes on Friday, January 29. There are prizes for those in San Antonio who wish to participate, including two tickets to the recently opened immersive exhibition space Hopscotch. Full info can be found in this pdf or at Ruby City’s Instagram.