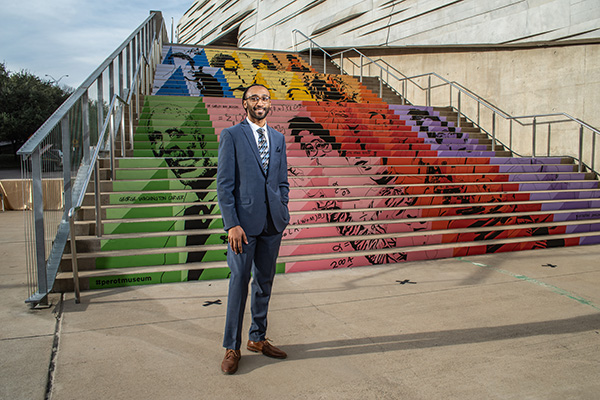 A design competition that stems from a partnership between the Perot Museum of Nature and Science in Dallas, the African American Museum of Dallas, and Kroger, has named architect/artist Daniel M. Gunn as winner of the Staircase Project. Gunn will receive a $5,000 prize for his design, titled GIANT STEPS: Celebrating Extraordinary Achievements of African-American Leaders in STEM, which is installed on the north-facing staircase of the Perot Museum in Dallas’ cultural district. GIANT STEPS will remain on view through Monday May 31, Memorial Day.

The design open call was announced last fall and open to African-American artist and designers to create “a vibrantly colored, eye-catching design that celebrates African-American leaders in science — from history and modern day — who have made significant contributions to STEM (science, technology, engineering and math).” Gunn’s winning design was selected by panelists Dr. Lauren Cross, Byron Sanders, and Arthur Simmons. 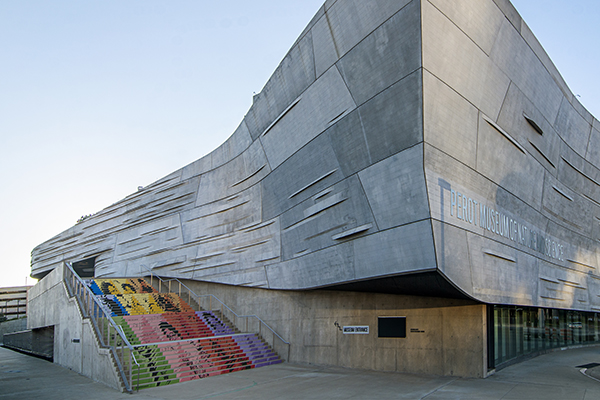 “Far too often the important contributions made by African Americans to the advancement of STEM have been untold, unheard and unseen. This magnificent design from Daniel M. Gunn shines a much-needed light on these hidden figures,” says Dr. Linda Silver, the Perot Museum’s Chief Executive Officer.

Says Gunn:. “Architects Paul Revere Williams and Norma Merrick Sklarek were two trailblazers who paved the way for me and many other African-American men and women to pursue careers in architecture. I was compelled to include these significant figures because African Americans are not very visible in the field of architecture.”

Gunn is a 36-year-old architect employed at Oglesby Greene Architects in downtown Dallas. Born in Alabama, he has lived in New Jersey as well as Louisiana, where he graduated with an architecture degree from Louisiana Tech University in 2008. He picked up a pencil at age five and has been drawing and painting ever since. He states that “When I’m not busy designing buildings by day, I’m honing my skills with the paintbrush on canvas by night.”