Watch as Though You’re a Reviewer 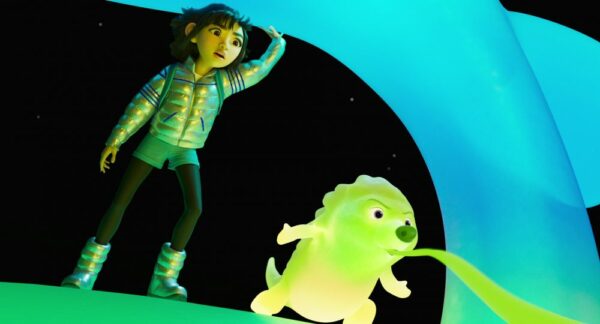 Still from Over the Moon

I’m finally learning how to watch films — kids’ films, mostly. Watching movies with my daughter has been one of the joys of a trying 2020. We live in New Mexico, where, as of this writing, the majority of museums are still closed, and quarantine is still crucial. The only art I’m able to fully engage with right now is art that’s made for the screen, so… I’ve been watching a lot.

Now that the television is no longer a mere pacifier for my kid and she invests in stories, what we watch together has really opened up. (That, and we spent a few months in the early Covid-19 closures working on stop-motion animations and claymations together, so she has a newfound meta-view about how animations are made.) Both Stevie and my connectedness to the movies we are watching now is reminiscent of theater critic Ben Brantley’s admonition to watch plays as though you were a reviewer: “I’ve learned that nothing is boring if you really focus on it.” (Please go read his full op-ed, a true love letter to criticism.)

With that: the G, Y-7 and PG-rated animation genre can really hold its own. (An aside about ratings: there are hosts of websites dedicated to telling parents about plot themes, language, violence, drugs, and even… non-Judeo-Christian religious themes, if that’s your sticking point). The only time I’ve ever copped out of something based on these “reviews” is because, in the case of The Willoughbys, I didn’t want to explain to Stevie why we’d be rooting for these kids to commit patricide. (Not yet.) 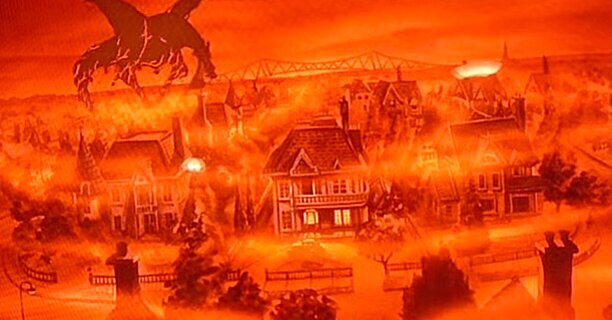 Still from All Dogs Go to Heaven

Back to impactful movies: take all of Don Bluth’s films. They lean dark, depressing, and even petrifying at times. Kids have to work for a happy ending, and even in All Dogs Go to Heaven (1989), that small portion of the film is literally shadowed by a terrifying, spirit-y demon-dog thing. (The parallels between that scene and the Faust apparition!) All Dogs Go to Heaven is already laden with heavy themes for kids, with the plot centered around some Sopranos-style murder to ensure control of a casino. (I had seen this movie in elementary school, and I don’t remember it being too much, but I don’t think I was quite aware of everything going on in it, either.)

This movie did bother Stevie, and she had a lot of questions. I guess we are taking a sort of “I Showed My 7-Year-Old Jaws and I Regret Nothing” approach here. To be fair, she has a lot of questions in general. When she was three she pointed at all the other patrons of a brewery and yelled: “What happens to the towns when everyone dies? When will all these people die? WHEN WILL I DIE?” This was about nine months after our dog died, and she was still figuring all that out.

Still from Over the Moon

Sometimes it is the disarmingly real plots that give a kids’ movie gravitas. But the disarmingly unreal stuff can make kids’ movies great, too. Netflix just released Over the Moon, by animator Glen Keane (of Disney’s The Little Mermaid, Beauty and the Beast, Aladdin, and more. Also the short film Dear Basketball, based on Kobe Bryant’s retirement poem.) Over the Moon is so good. The blend of different styles of animation and storytelling (some songs are traditional choir sounds, some are EDM festival K-pop, with visuals to match) are spun together masterfully. The way that the moon-beings glow from within is visceral. At one point, enormous glowing frogs leapfrog and “swim” in the black atmosphere, and Stevie responded with a sort of terror, overwhelmed from the sublime quality of the quiet scene. (There have been many critiques of Over the Moon that say it’s too predictable and follows “I Want” tropes and logic. I guess I’m not yet tired of young girls and women saying what they want, and going out to get it. Other critiques say it’s visually jumbled, but I like the mash-up of styles. Not just for the sense that they feel imaginative or contemporary, but the simple fact of risk — the “why not?” of them.)

Technological advances have a lot to do with animated films’ improved quality, but the stories being told are broader and more layered, too. That said, I will always be team “material” in any art form, including film. There are still studios making real claymations, like Shaun the Sheep, or the Moomintroll shorts based on the books by Tove Jansson. 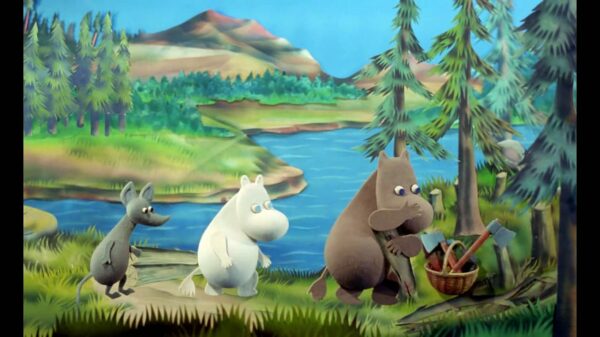 Still from Moomins and the Comet Chase

The 2010 film Moomins and the Comet Chase is one of the weirdest movies I’ve seen. The clunky stop-motion animation was originally made as a series of paper animations in the 1970s by a Polish company, Se-ma-for. Stereoscope Ltd. retained this style for the 2010 movie, and the introductory credits alone have me swooning. Set to Bjork crooning “the comet, oh dammit…” with Peter Saul-like airbrushed scenes and backgrounds, the fuzzy, felty little Moomins act out various dramas. The movie itself deals with kid-friendly themes like, ya know, total annihilation. The characters go on a journey to find out more about the comet, and the voice actors are well-suited for their parts, like the philosophical Muskrat, voiced by Peter Stormare. 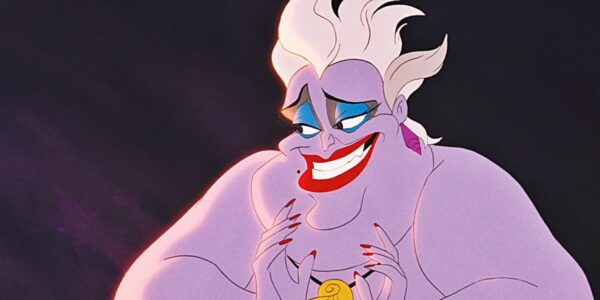 Even the Disney franchise is widening its scope and making more interesting plots. This begins around the Glen Keane era, with the Broadway-like Little Mermaid. If you can’t enjoy Pat Carroll’s Divine-esque tentacled sea witch growling about the importance of BODY LANGUAGE, we may be at an impasse. 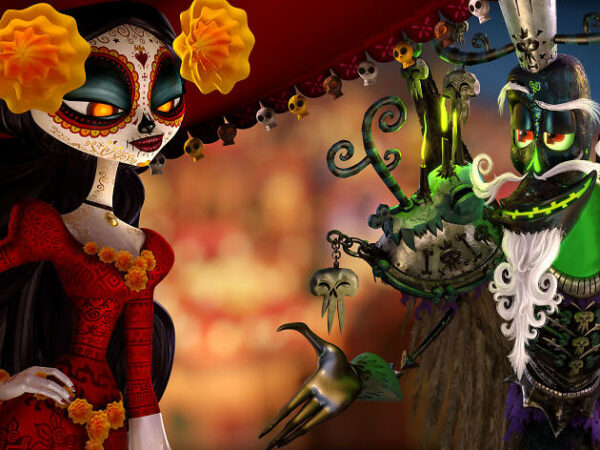 Still from The Book of Life

The last kids’ movie I’m going to recommend (I guess that’s what this is) is The Book of Life. This charming, hilarious, visually compelling project is what happens when an entire animation comes from a single, visionary animator — in this case, Jorge R. Gutiérrez, who wrote and directed the film. There are moments that the characters, especially the males, verge on the grotesque and hyperbolized, with cacti-like noses, gaping mouths, and spindly, knobby limbs. The movie is rife with macabre humor, but the real delight is in these exaggerated visuals that permeate every layer of the animation. Kids’ movies, the really good ones, tend to deal with loss, pain, even melancholy. They resonate now more than ever.

Back to the recently-retired’s Ben Brantley’s sage advice: when we find ourselves isolated, and craving connection, we can find it (for a moment at least) though critical engagement with something wonderful someone has made for us. And thank god for WiFi.