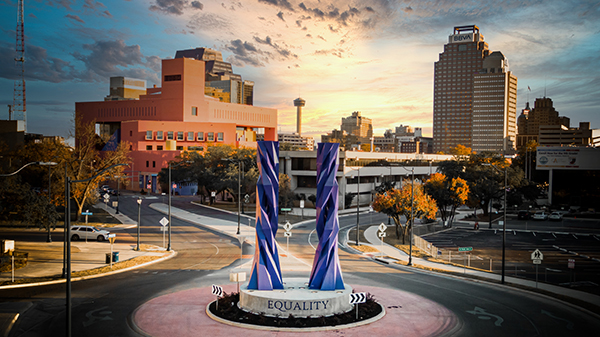 Located at the city’s San Pedro roundabout, the cobalt-blue Door “symbolizes the infinite struggle for justice with two tightly wound, geometric pillars that stand side by side.” The internally-lit sculpture is a gift to the city from Sebastian and Siempre México.

San Antonio District 1 Councilman Roberto Treviño states, “Our city has a powerful history of fighting for rights that are inclusive and support everyone. Today, there’s many conversations and movements championing for thorough and considerate efforts starting right in the heart of downtown. The Door of Equality (La Puerta de Igualdad) serves as a visual reminder of how we must continue to champion behind what is right and just.” 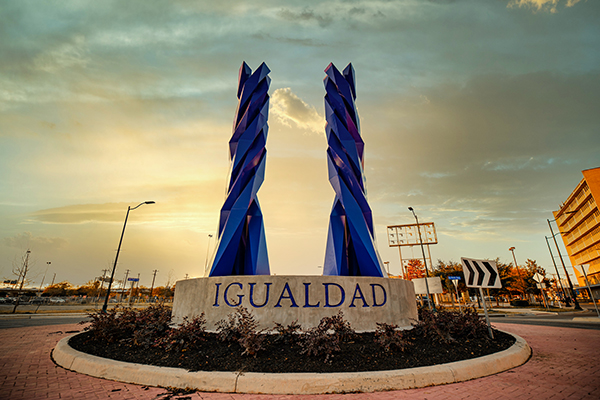 Says Sebastian: “With the current climate we are living in, one where walls are being proposed, I wanted to create a work that speaks to the importance of keeping doors open and being vigilant about true equality.”

“This new welcoming landmark stands for the promise of opportunity that shall never cease to remain open in San Antonio,” says Department of Arts & Culture Executive Director Debbie Racca-Sittre. “The Door of Equality not only represents our City’s commitment to equity, but also in ensuring that art is accessible to all.”