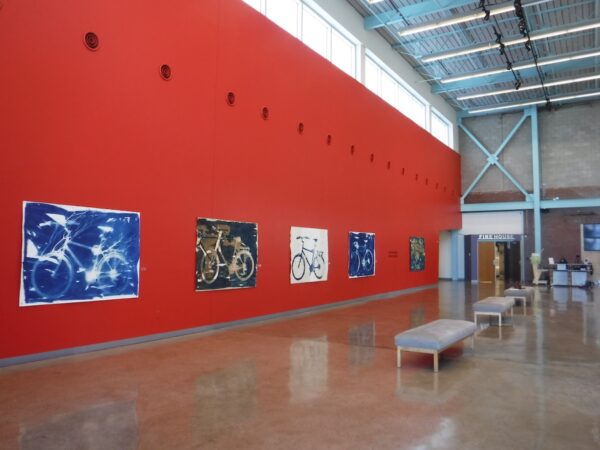 The day that I met with Carol Flueckiger at the LHUCA was a sunny one — and windy — which are the two most prevailing weather conditions of Lubbock. It is no wonder, then, that these features of the Texas High Plains figure so heavily into the work of one who declares “My subject is energy.” 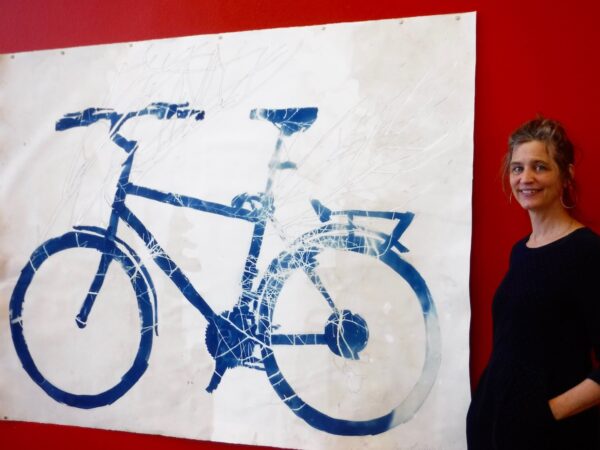 Flueckiger with one of her works in the show

In Flueckiger’s solo show Solitary Voyager, at Lubbock’s Louise Hopkins Underwood Center for the Arts, energy is manifest both in Flueckiger’s process for creation, as well as in the visual qualities of the paintings themselves. The large-scale works on paper — most measure 52” x 72” — include a limited palette of tea-toned brown and blue, the latter dictated by Flueckiger’s cyanotype process. These two colors echo the pervading pigments of the flatlands. Lubbock, remarks Flueckiger, “is an additive color landscape — more light than land, more horizon than pavement, more sky than earth.” The High Plains is a vast and desolate environment whose landscape is inseparable from the atmospheric forces that have shaped it. Here, the rare rural tree bows eastward, sculpted thus by southwesterly winds. Once the rains of April cease, if there happen to be any at all, grass becomes sere, settling into a color study of russets, browns, and golds.

And then there are the sun and wind. Wind, as in the “Cue the tumbleweed!” wind in Insert-Name-of-Any-Western-Film-Here; and off-camera, someone releases the lone, rolling Russian thistle that lets the solitary-voyaging cowboy know that he is, indeed, isolated. Flueckiger’s use of the tumbleweed, though, is anything but hackneyed. She adopts both it and the bicycle (that most solitary form of transportation) as visual metaphors for her series, layering themes of women’s rights, independence, self-determination, embodied spaces, flux, and gendered monomyth. 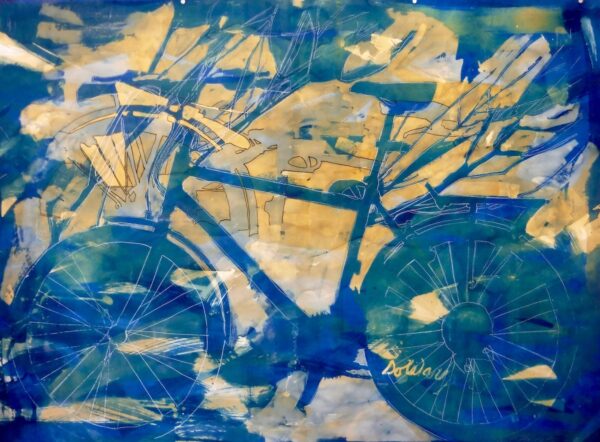 Solitary Voyager takes its name from Elizabeth Cady Stanton’s groundbreaking 1892 speech for women’s rights, Solitude of Self. Stanton argues, “In discussing the rights of woman, we are to consider, first, what belongs to her as an individual, in a world of her own, the arbiter of her own destiny, an imaginary Robinson Crusoe … on a solitary island.” It is the notion of monomyth — the type of voyage where the hero(ine) is transformed, returns home as a different person — that captivates Flueckiger. This, she says, is the stuff of “history, movies, and academic curriculum.” But, she concedes, her work is less about the sweeping romantic-sublime narratives of literature and history than it is the local, the personal, and the “romantically bland” themes of artists like Julie Bozzi. “It’s those corners of everyday life,” Flueckiger explains, comparing Bozzi’s work to her own.

Returning, in our conversation, to the notion of the mythic solo expedition, she adds:

I wanted to make the voyager in Stanton’s phrase simple. Something anyone could do. What civil rights moments or environmental encounters happen on an everyday neighborhood bicycle ride? How does the constellation of experiences and decisions it takes to own and ride a bicycle — skinned knees, age, foreign neighborhoods, nature adventure, bicycle theft, economics, helmet safety, and gendered frames — calculate as a solitary voyage? 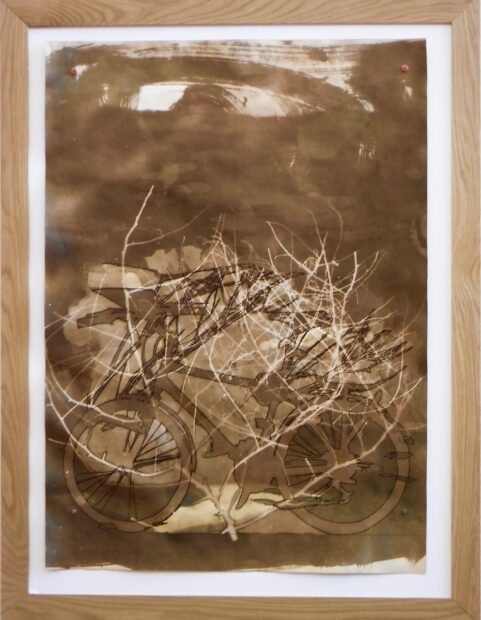 With these aims in mind, it makes sense that Flueckiger is more preoccupied by the embodied intimacy of travel-as-action than with the experience of travel-as-epic. “When you move through atmosphere, as in travel,” she explains, “you have less borders on the body. You become one with the atmosphere …  you lose yourself in a good way. Think of the skin as porous, you’re in communion [with your surrounding space] through movement.”

That oneness with the experience of movement is important to Flueckiger in how she creates her paintings, as well: the technical aspects of creation are aligned with her notion of atmosphere-as-vehicle; and her process relies as much on the physical as it does on the compositional. The corporeal acts of making Franz-Kline-like sweeping gestures in applying the photo-sensitive solution, of heaving the bicycle onto the paper, of wheeling the whole into the sun — all of these are part of the process as well as apparent in the product. The corporeality complements the ephemeral qualities within the work, too. “I like the contrast of the physicality with the atmosphere,” Flueckiger notes, pointing to her partnership with Nature. “These [paintings] are sunburns. The bike is the sunscreen. The burning is physical … the [rinsing] water is physical … But what’s left behind is the ghost of the physical … Nature and colors are born out of the experience — they are emerging, not painted on top.” 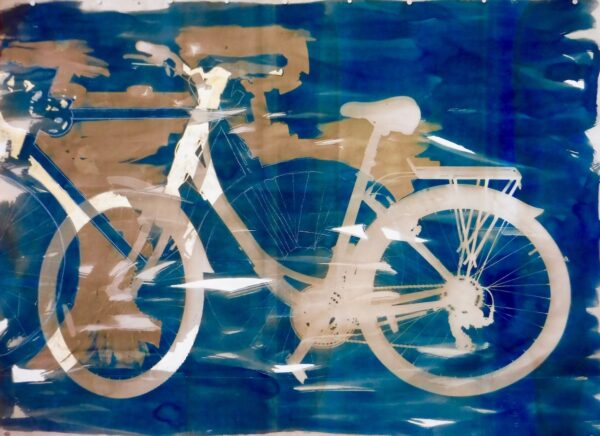 These layers of application — of sunburning, rinsing, and repeating — yield an imagery that possesses both the spectral quality of an x-ray and the permanence of a fossil cemented into geological strata. Flueckiger’s paintings hold the dynamism of a fleeting movement through space alongside the low-key, potential-energy hum of a photovoltaic power station. They speak to the transience of quotidian life juxtaposed against a background of deep time. In this period of pandemic, where time has seemed paradoxically compressed and expanded, Elizabeth Cady Stanton’s words, delivered over a century ago, seem to resonate profoundly even now: “The chief reason for opening to every soul the doors to the whole round of human duties and pleasures is the individual development thus attained, the resources thus provided under all circumstances to mitigate the solitude that at times must come to everyone.”

On view at Louise Hopkins Underwood Center for the Arts (LHUCA), Lubbock, through Jan. 30, 2021

“44 Artists from Texas” at the Louise Hopkins...

Three’s a Trend: Blake and Hannah Sanders, and...