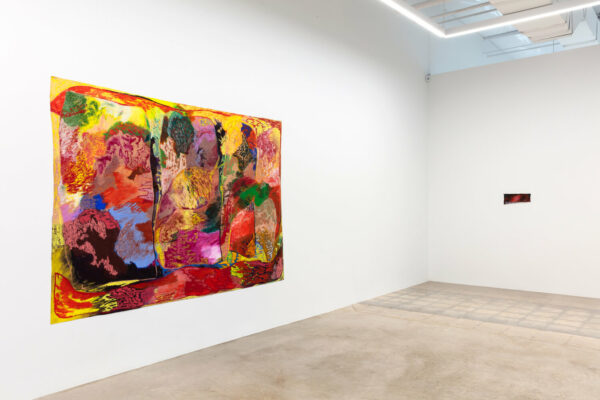 It’s impossible to ignore Rachel Jones’ work. Her pungent, tangy hues and brilliant, buzzing color combinations evoke a synesthesia-like viewing experience. English psychologist Charles Spence has written that “what we taste is profoundly influenced by what we see,” and Jones’ luscious colors — caramel creams, acid yellows, raspberry magentas, and blood reds — conjure tastes on the tongue. In a 2017 interview, Jones used the term “ripe” to refer to her works, which is fitting since her paintings seem so vivid and alive. Jones’s first solo exhibition in the United States, A Sovereign Mouth at 12.26 Gallery in Dallas, is a feast for the senses in which color becomes a language in and of itself.

“I have always been interested in the potential for color to be used as something which is active and has an emotional and psychological meaning,” the artist explains in a recent Zoom call. Jones tells me that her goal is to produce a sort of sensory overload that antagonizes, but also seduces her viewers. It’s working. 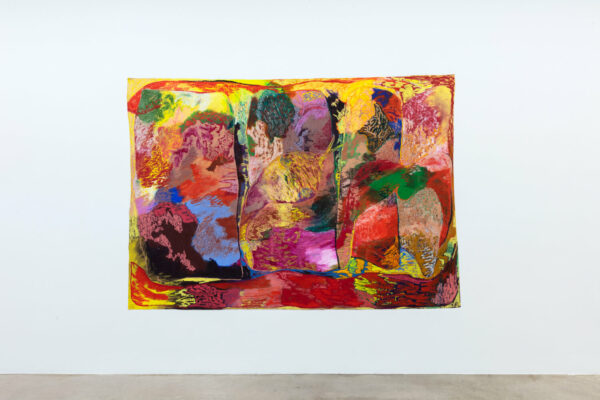 Jones was born in Whitechapel, East London and grew up in Essex. She loved drawing as a child. With drawing, “you draw a line and nothing becomes something,” she says — a process that still seems magical to the artist today. Her love for cartoons initially drew Jones toward animation, but after a summer course in the subject, she recognized that her true calling was in fine art. Jones completed her BA at The Glasgow School of Art and her MA at The Royal Academy of Arts in London. At only 29 years old, the artist has already won a number of prestigious awards and honors, including a residency at The Chinati Foundation in 2019. The work in A Sovereign Mouth was created earlier this year in her Essex studio.

“You don’t need to know about drawing to make a drawing,” Jones tells me, “so there’s this democracy to drawing.” Although she calls her works paintings, the artist’s process and materials keep her close to her favorite method. She uses Sennelier brand oil pastels and oil sticks. Made of pigment, binding medium, and mineral wax, oil pastels are like paint but in a more solid form, and are applied in a mode that’s closer to drawing. The art material was invented in 1949 for Picasso, who was looking for a simpler, more immediate way of transferring color to a surface. Jones, who painted before discovering oil pastels, prefers them for the same reasons. She describes her process as intuitive, instinctive, and as “free as possible.” With oil pastels  — which retain their vibrancy and intensity even when built up in layers  — “there’s little interruption to my thinking when I’m making,” she says.

Freed from brushes, mediums, and long drying times, Jones achieves a rich gamut of effects and textures with her oil pastels and oil sticks. Her pieces move from thick, fleshy impastos to thin, diaphanous veils of color. Some works record the gestures of her hand in searching, slanted strokes, while in other pieces, marks don’t matter as much as the patches of pigment that seep into and sit atop her rough, raw canvas and paper surfaces. These are either stretched and hung on conventional, large-scale frames, or cut into uneven strips and stapled directly to the wall. 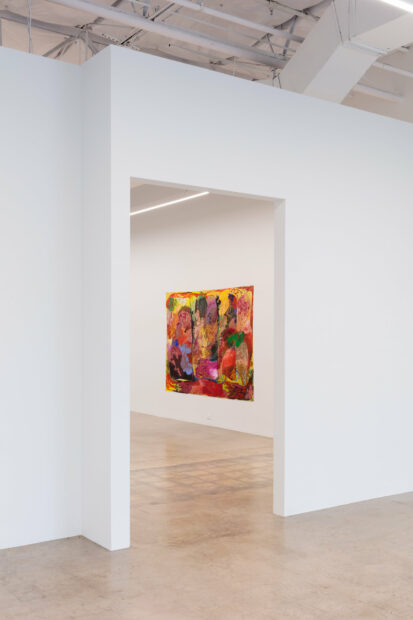 These two diverging pictorial formats reflect Jones’s growing interest in testing “what a painting is or how a painting should be shown,” she says. The drastically different picture sizes also influence how viewers’ bodies physically relate to the images, and how close or far away they may be drawn in. Jones has been engaged with the body, and specifically the Black body, throughout her career. While her 2017 exhibition The Black In Their Face (The Residence Gallery, London) tackled the representation of Black bodies in art history and visual culture through painted, plaster sculptures of faces and heads, her latest works hone in on the mouth as a symbol of the Black experience. 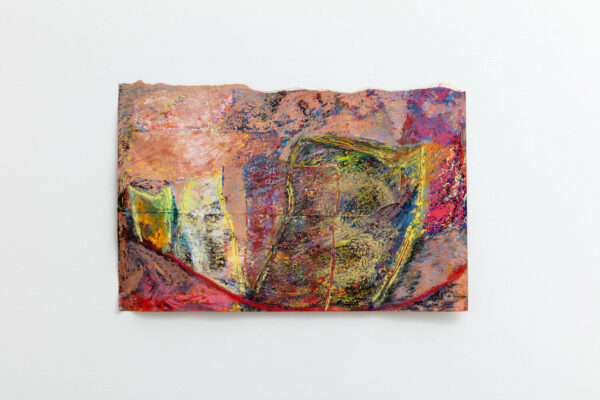 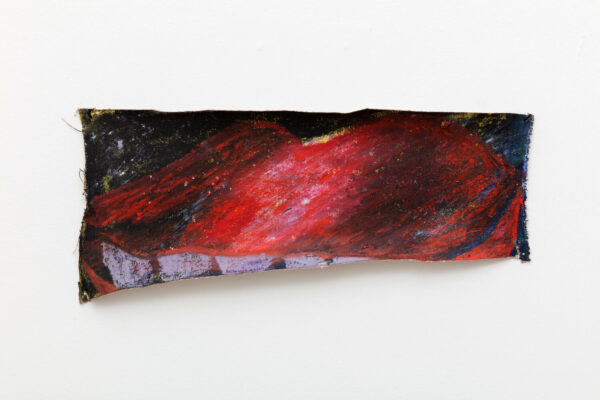 The mouth is one of the most active points in the human body. It is responsible for essential functions like breathing and eating, social actions like speaking and kissing, and is tied to notions of beauty and disease, the grotesque and the alluring. For Jones, the mouth is also a crucible for messages about the Black body and its adornment, which can range from stereotypical or fetishizing to glamorous and empowering. Her latest series is inspired by images of Black men wearing grills. The outlines of teeth and lips are faintly visible across the works, but Jones’s paintings remain tantalizingly amorphous, and hover between abstraction and figuration. 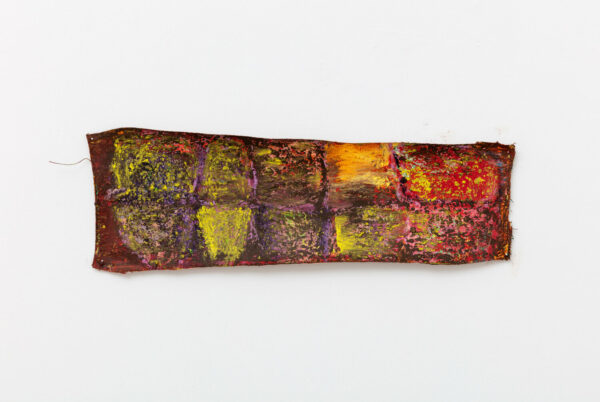 As the exhibition’s title indicates, Jones’s work is also rooted in the milieu of English society: the United Kingdom is ruled by a sovereign queen, and a sovereign gold coin is a monetary unit worth one pound sterling. In England, the coin is often worn as jewelry — Jones wears one on a necklace given to her by her grandmother — especially by working-class white and Black communities. “There are racial tensions between those two groups of people, but they’re both using the same material as a form of expression and self actualization,” she explains. The primacy of gold reaches back to British colonial times and beyond, but the material also holds a more personal connection for the artist: Jones’s grandmother sold gold, and her grandfather had gold teeth. 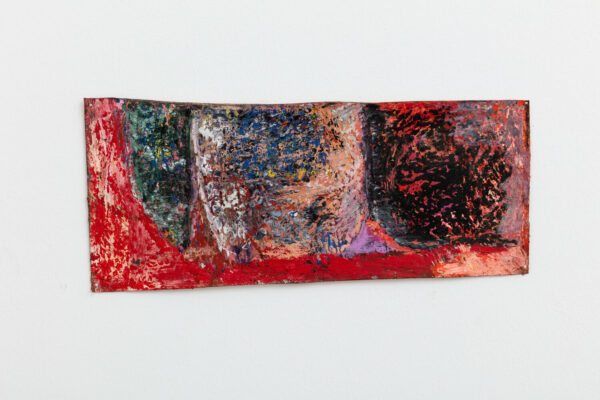 The English art critic John Ruskin once wrote that “The purest and most thoughtful minds are those which love color the most.” The phrase reminds me of Jones, an exceptionally thoughtful artist who produces exceptionally thoughtful work. “When you’re drawing, you’re trying to replicate something, whether it be an emotion, a thought or an observation. There’s just a sense of having to pause and consider things,” she tells me. Jones considers color — of someone’s skin, of a coin, of a mouth — through color, and the result is visually and conceptually rich. “I want to approach people, I want to be encountered. I want you to acknowledge and address me,” she says. And when we do, it’s a sensory challenge and a delight.

Rachel Jones: A Sovereign Mouth is on view at 12.26 Gallery in Dallas through December 19, 2020. All quotes are from the author’s Zoom interview with Rachel Jones on December 4, 2020.