Note: The weekend before last, Glasstire’s events and social media editor William Sarradet traveled alone by car to Rockport, on the Texas Gulf Coast, to attend the 14th Annual Rockport Film Festival, which screened at the Aransas Pass location of Movies, Inc., a locally operated, independent movie theater. Attendance at the theater was capped at 50% capacity, and face masks were readily available and mandated for all moviegoers. Total recorded cases of Covid-19 in Aransas County, for which Rockport serves as the county seat, remain below 400 at the time of this writing.

Read Part 1 of this 2-part series, the introduction to this year’s Festival, here.

The Festival screenings, by day:
THURSDAY 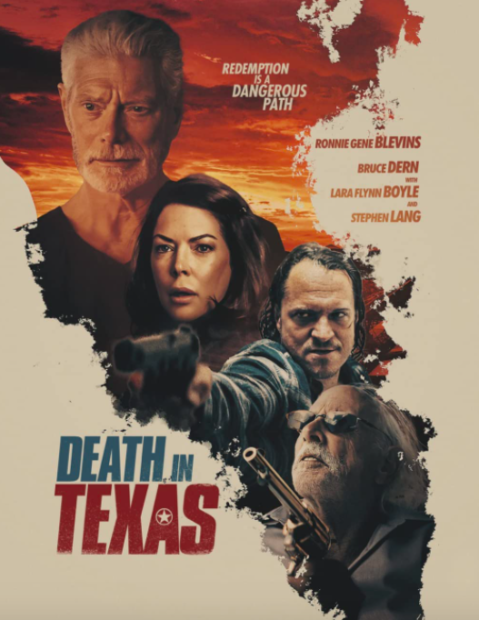 Death in Texas, directed by Scott Windhauser, is the first lead role for Ronnie Gene Blevins, and features Lara Flynn Boyle’s first screen appearance in six years. The project has been a labor of love for the producers, Rockport residents Allen Gilmer and Riki Rushing, who hosted this year’s red carpet opening for the festival.

Cemil, a rural Turkish villager, walks the pomegranate orchard with his orphaned nephew, pointing out rotted fruit, remarking on the relationship between the fruit and the soil. This relationship will play out for the remainder of the film in slow, rolling sand-colored scenes as we learn that this part of Turkey has been abandoned. The villages are being deserted as the people relocate to “the city.” We don’t see much of the city or its inhabitants, as Toprak is a story about blameless subjects that have been faulted by the way of the world. Cemil’s mother is dying, and the only options are to sell the land their family has lived and worked on for generations

Cemil meets with a shady broker, hoping for some options to make money to pay for his mother’s desperately needed medical attention. The broker offers up some unseemly options: some immoral, some  illegal. As times get tougher, Cemil tells his nephew that men don’t get tired and they don’t cry. Cemil forgoes his religious faith and turns to drink. The risk of losing it all has become reality. 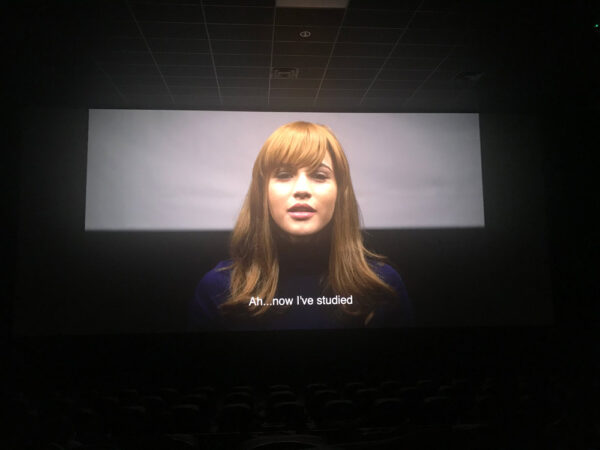 This ws listed as a ‘Student Film,’ which is a bit of misdirection. Michael Shea directed students at a Texas high school in this updated take on dystopia. Six individuals challenge each other in various exchanges of wits in a virtual reality program, veiling their opinions and personal interests through “Scope and Sequence” codes, a system used for categorizing courses within the Texas public educational system. The actors and director successfully convert a simple black-box theater into a sharp psychodrama. 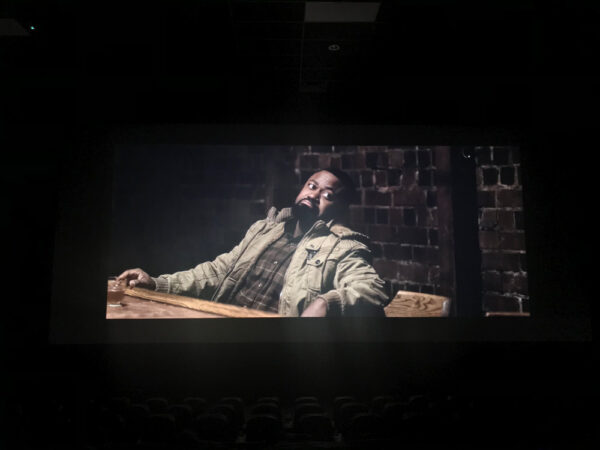 This short film is an extended punchline, with one of the most interesting premises of any film shown here. A sociopathic narcissist walks into a bar, and bribes his bartender for little more than his time. The performances are lively and strangely believable in spite of the major stakes. I won’t spoil it; the story takes you on a journey that makes the brisk runtime worth every turn in this short. A handful of twists are worth every second of your attention.

Two friends exit a restaurant, which is boldly marked by ‘420’ stickers on the door. As they leave, an unnamed driver creeps behind them in a limousine. A couple of goonish cops stop by to remark on the trail of skunk odor, but then respond to a more important call. The friends continue their walk to a movie  theater, blabbing about how films are good, and bad, but mostly fun. Smith keeps the camera moving during this ambiguously scripted stream of consciousness. The whole thing happens in one take, and there are no masks involved. The banal moments of the past feel more wholesome in retrospect. 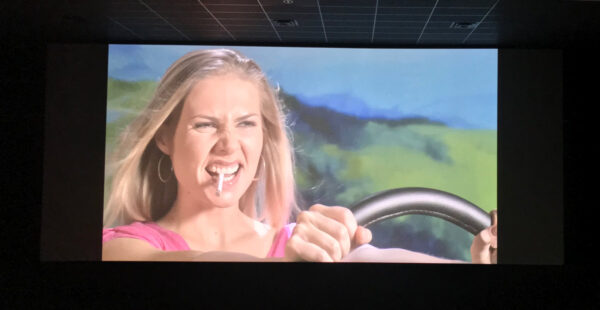 Houston-based Gaber’s short was developed while the director pursued their MFA at the University of Southern California. The constraints for the assignment were no dialogue, and no green screen. The silent main character sits in traffic, puffing on a cigarette while contemplating her favorite memories, which feature background paintings by fellow Houstonian Beverly Gale. Gale’s paintings don’t speak loudly in My Smoking Movie, but they do contribute to the Hollywood feel of the flick.

Tiberius is a boy performing poorly at primary school in Romania, and something about his home life is the cause of the trouble. The film happens backward, in a choppy sequence of scenes that reveal his family’s dynamic. Ve Gänæaard skips a stone across the water of narrative, subtracting the story from the outset until there is nothing left for us to question. The story benefits from this orientation; the viewer has to actively imagine what happens between the scenes as we travel back in time. Generally, movies show big events and leave out the boring parts of life, but this one discerns minute details about what defines this family. 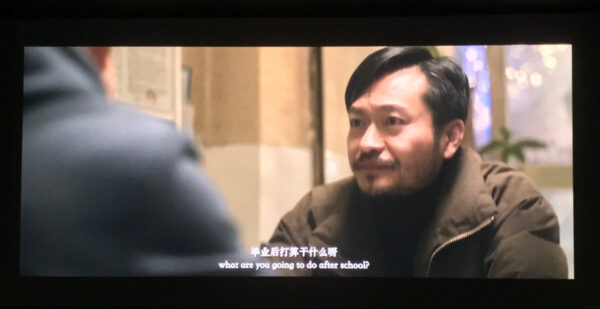 A student film from China, First, Last is about prospective pilot, Xiaofeng, and his father’s attempts to insert himself into the life of his child. Xiaofeng wagers his complicity in his father’s actions as they become more compromised. The film ends with a title card that laments the number of students who drop of out pilot school every year due to vision impairment. 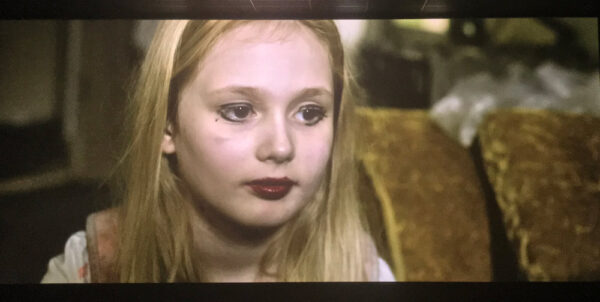 Emma (Audrey Grace Marshall), the imperiled protagonist that carries this slow feature-length film about American abjection, is so consistent with her curious nature that it feels like we’re watching her grow as a fictional character and as a person. The story is simply that she has no respectable adult to turn to at this early point in her life, and she doesn’t know it yet. Her father is a victim of war, and her godmother is the pious type that warns of demons. In this sense, ‘war’ is framed as a generic, ambient pre-existing condition of life. Emma struggles to understand the rules of a broken society that the adults offer up, but her inability to understand is a sign of potential rather than deficit. 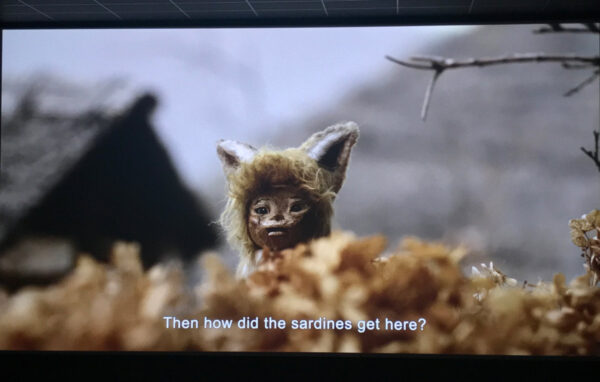 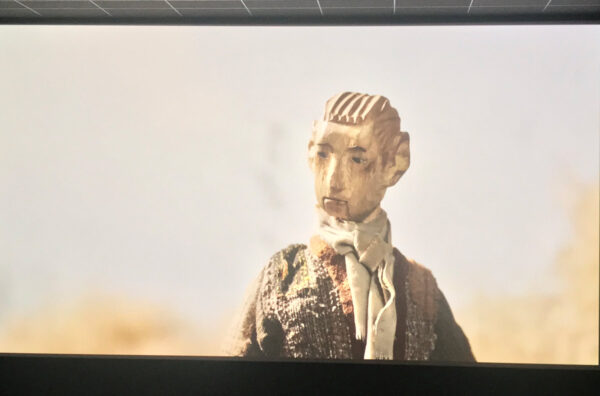 An orphaned fox teases a pair of human villagers in this handmade Japanese fable. Shot in stop-motion, the puppets and part of the environment consist of painted woodcut armatures. Watch out for the ending. It’s a tearjerker. 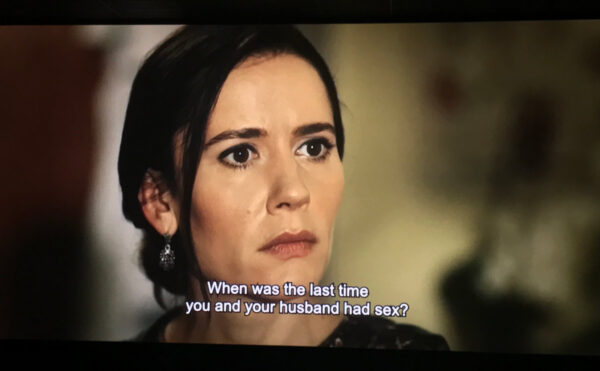 This Ukranian film is adapted from a novel of the same name. We follow Penelope, a decent woman in Kiev who works in an archive and submits to her worthless layabout husband. At the archive, she encounters a swarthy researcher, a sensual man who woos her with a complicated parable about how their names insinuate a matrix of connection between them. Director Natalia Pasenytska paints a romantic depiction of Ukraine, swaddled in passion and philosophy. She prods the desires of women who find themselves unfilled as rule-followers.

Launched in 2018, the Sunday program is typically a curated showcase of Rockport-area filmmakers. Because of the limited output this year, only one local film (American Ocelot, directed by Ben Masters) was screened. The local films that would have otherwise been shown during this programming block have been replaced by domestic and international shorts around the theme of what it means to be ‘neighborly.’

One man in suburban New Zealand has internalized the bygone era of culinary socializing by converting his home into a food market and upscale restaurant. His family members are made to be staff and patrons, and they are getting tired of his neurotic delusions. The premise and execution are clever and silly enough to successfully make light of something that none of us expected to be taken away for such an extended period of time. 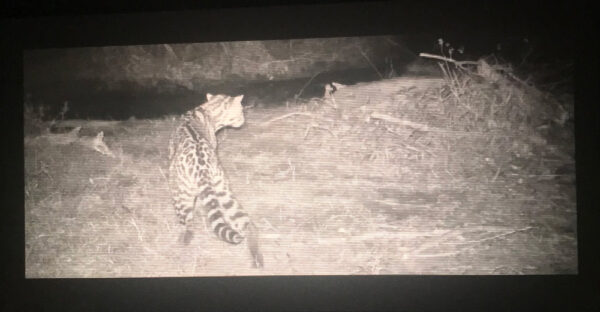 The ocelot is a medium-sized wild cat whose fur is spotted with rosettes, similar to a leopard. The feline is native to the lower half of the Americas, and the southern coastal Texas habitat for the ocelot has shrunk, endangering the animal toward extinction. This film articulates the dynamic between the US Fish and Wildlife service, international cooperation with Mexico to explore options to keep the gene pool intact, and the ranchers who own the small portion of land on which these cats live. The fanaticism of Tiger King is faintly recalled as some of these researchers become emotional about the future of the ocelot, but this film’s depiction of conservation practices is a reminder that there are people who dedicate their lives to understanding the distinct impact of individual species on our land, and our lives. 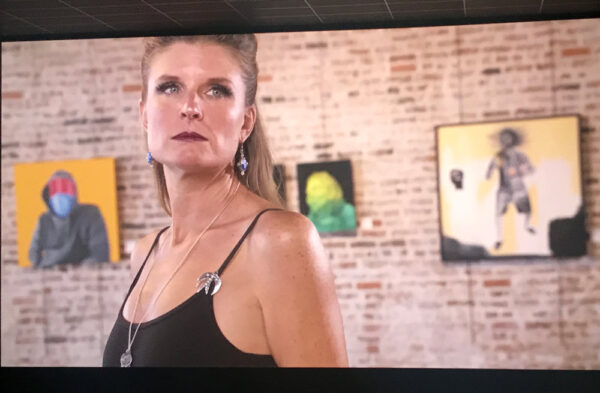 Women on the Verge of Silver Meltdown, directed by Carlos Haney and Luis Purón

Women on the Verge of Silver Meltdown, directed by Carlos Haney and Luis Purón (Rockport)

Yes, the title of this fashion reel featuring Rockport area silversmiths is a reference to Pedro Almodavor’s Women on the Verge of a Nervous Breakdown (1988). This video was shot on location at the Estelle Gallery of the Rockport Center for the Arts during this year’s Sacred Americanx exhibition, which features work by Alejandro Macias and Amorette V. Garza.

Note: Travel accommodations for this piece were subsidized by Rockport Center for the Arts.