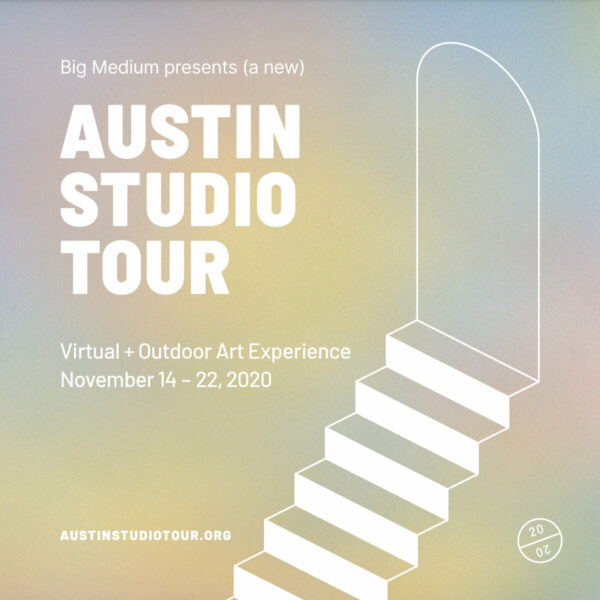 The East Austin Studio Tour is trying something new this year. Because 2020.  The annual, self-guided, art-soaked itinerary, which spans two weekends every November (it continues through this weekend), has gone virtual (mostly). Its organizer, the Austin non-profit Big Medium, has found a happy medium — online and outdoors, and where East meets West. In a year which has mourned the death of the art fair, there is still some hope with hyperlocal plein air.

“We had been thinking about combining EAST and the West Austin Studio Tour for a few years,” says Big Medium’s Executive Director Shea Little. “Then the pandemic hit and it forced us to make it happen this year.” When Little started the tour back in 2003, his vision was simple: connect artists to each other and engage the public with the city’s culture.

That message has remained the same, even as the tour has grown exponentially, sopping up more art spaces, open houses, and community events with each passing year. In 2012, the West Austin Studio Tour was added as EAST’s springtime companion, and that’s when things got tricky. “Organizationally, we’ve struggled with having two tours,” says Little. “If we could make it one big thing, we’d be able to focus more on the programming and make it more sustainable.”

There will be 420 Austin-based artists and collaboratives participating in this year’s citywide happening, which takes place November 14-22. Studio visits, demonstrations, and artist talks will be featured online (both live-streamed and prerecorded) with socially-distanced outdoor experiences thrown into the mix. Artwork is for sale on the Austin Studio Tour website as well as artists’ personal pages. Instagram will be the femoral artery, supplying rich, oxygenated content to virtual tour-goers.

This kind of hybrid programming — a mix of virtual and physical events — will likely continue as a model for many cultural institutions in a post-COVID world, including Big Medium. The digital sphere has kept us hyperlocal, disembodied, and intercontinental all at once. “It’s this weird duality,” remarks Little. “Art spaces are falling away, but at the same time, we’re creating more access points.”

The full lineup of artists and collaboratives (as well as links to their work, websites, and IG accounts) can be viewed here. For those looking to explore some outdoor art, grab a mask and check these out: 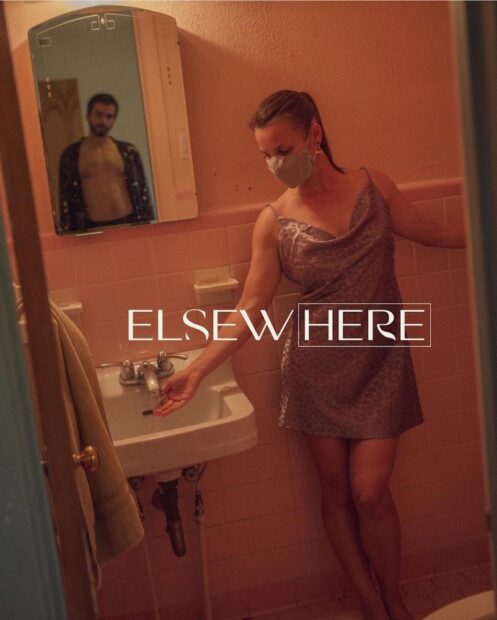 Choreographer Jennifer Sherburn has created a self-guided tour of dance installations on this quiet East Austin property, where an audience of no more than 10 will rotate through and connect within our current confines. Performers Jairus Carr, Ciceley Fullylove, Lisa Anne Kobdish, Hailley Lauren, Taryn Lavery, Alex Miller, Clay Moore, Amy Myers, and Sarah Annie Navarrete will be dancing in and around the house, offering a voyeuristic glimpse from a distance into whatever may be happening in any particular moment. 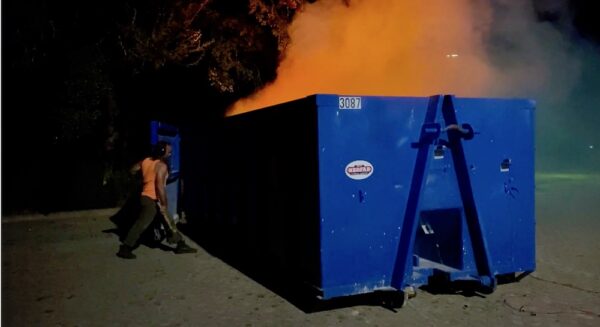 Dumpster Fire is an immersive, percussive outdoor performance of artists and robots duking it out with orchestrated algorithms on two flaming dumpsters. Who will win? Artists Thor Harris (Swans) and Lyman Hardy (Pong), with additional engineering by Emmett Palaima and Kyle Evans, are gonna bang your brains out in dadaLab’s 25,000-square-foot backyard. (Additional outdoor audio and light installations will be on view beforehand.) 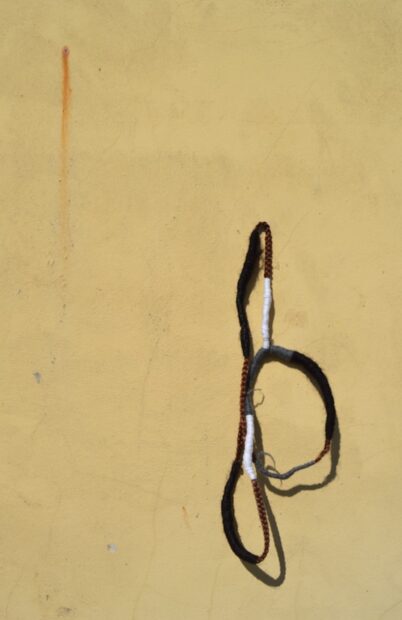 W&TW’s artist-in-residence Brianna McIntyre will have an elaborate window display on view at the gallery throughout the tour. McIntyre is an artist and designer whose creative practice focuses on “crafting objects and ephemera that communicate narratives of duality, precariousness, and her experiences as a Black woman.” McIntyre’s experimentation with fabric, found objects, and furniture finds new freedom within old forms, questioning each material’s comfort zone and redefining its intended use. 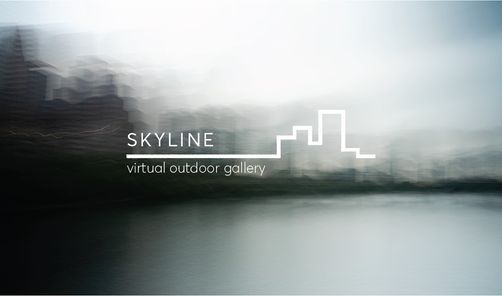 Photographer Toni Toscano has created a virtual series of photographs at various points along Ladybird Lake. Look for the shiny QR codes to access the virtual gallery of photos on your smartphone at each location. (Skyline is also viewable online if you can’t make it in person.) Toscano will host an artist talk on Zoom November 19 at 6:30pm. If you plan to attend the virtual outdoor gallery via kayak, be sure to specify on your RSVP…  . 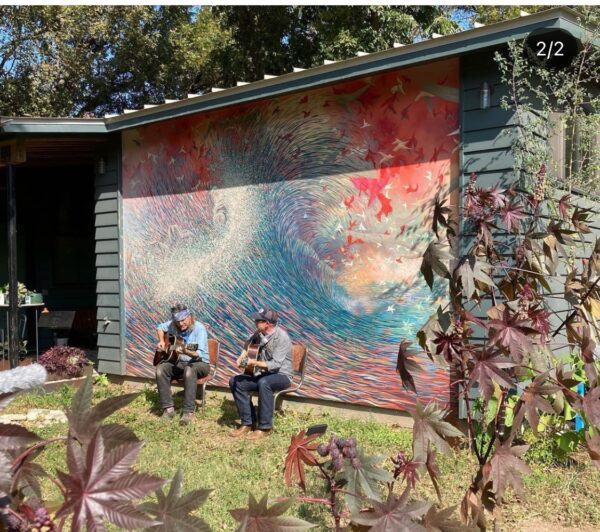 Mural Sounds is a pre-recorded concert which can be viewed from the street, an experiment in “letting go of control and creating unexpected paths to a new direction” states artist Jana Swec. Musicians Wilson Marks, Justin Stewart, Courtney Gray, Peter Mazzetti, Emily Kolb, Evan Voyles, Jesse Ebaugh, Alfredo Rios, James Parker, Zach Matteson, and Jahrel Pickins have each been filmed by videographer Karl Toft in front of Swec’s yard mural, playing to the tune of a pandemic. A series of videos about Swec’s painting process, with music by Wilson Marks, will be released on the artist’s personal page starting Saturday. A little IG sneak peak of Isolation 55 mesmerizes with its heavy beauty. 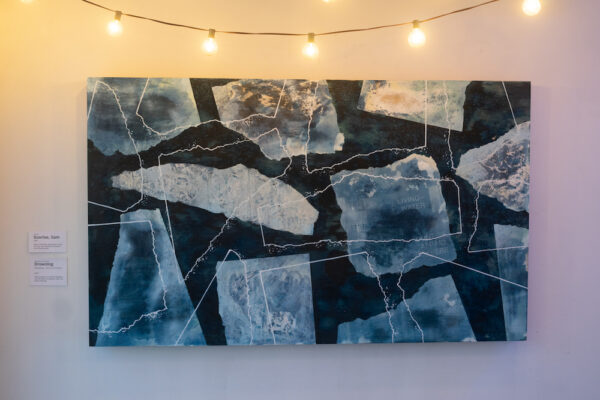 The installation artist will be hosting a nightly open-air show in his garage and lawn featuring three light and sound sculptures, as well as two paintings. Clarke’s installation Cairn is a carefully assembled pile of quartz and limestone, with a voice-activated LED light as a chakra-inspired cherry on top. “A lot of my art is faith-based, but Christianity doesn’t have ties to nature like Eastern religions,” he tells me. “So I wanted to focus on foundational elements such as water and air.”

The show’s title refers to the two tides of fear and hope, which Clarke believes must coexist for a full life. He says he’s been thinking about what we’ve all been through in 2020, and wanted to create a show based on those challenges — not least of which are his pissed-off neighbors:

“This installation isn’t within the bounds of my HOA,” he laughs.

“Resight” at El Rincon and the Birth of...