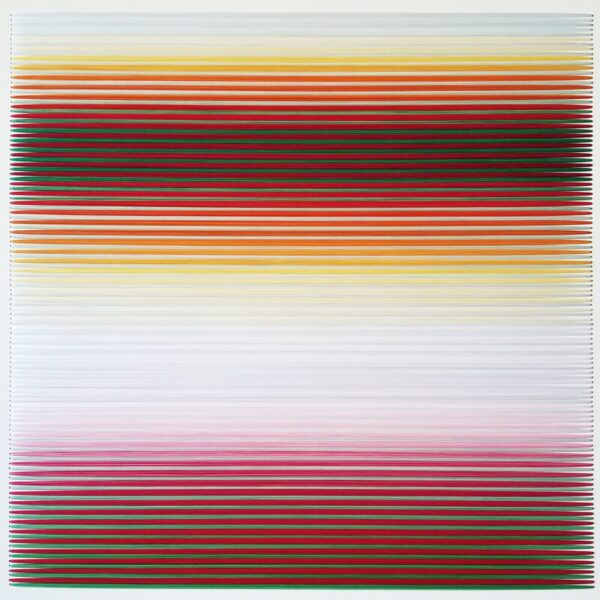 I’ve long enjoyed Bumin Kim’s textile works — they’re Maximalist-Minimalist. They’re highly complex in terms of the multitude of colored threads she uses to create her gradient fields, but they have a real sense ease in terms of looking at them.

Coalescence is Kim’s third solo show with Ro2 Art in Dallas. I’ve been able to witness her evolution as an artist (thus far) since her final MFA days at UNT in 2015. Earlier, she created pieces with threads that resemble hair either wound up tightly in a bun (her Budding series) or combed straight and allowed to hang freely (Vexillum series). Kim’s most well-known works, however, are landscapes, and they’re abundant in this show.

These gradient thread paintings are inspired by fleeting moments — experiences with nature. Mostly, her source of inspiration can be drawn from the titles of each piece: shifting skies at dusk, or the in-between colors of autumn leaves. Titles and works represent memories and the ever-changing state of the world around us. As we’d expect from Kim, the colors are satisfying, and her craftsmanship is flawless. And the meticulousness required to create such a seamless descent and ascent of colors is astounding. 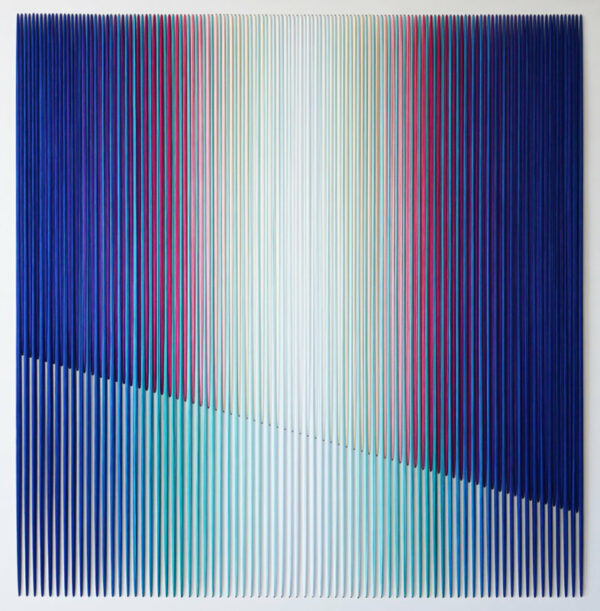 The diptychs and triptychs in the show allow Kim to play with the ideas of movement, continuity, and reflection. Into the Sky #1 and Into the Sky #2 are the inverse of one another, and remind me of parabolas; the mid-section of the paintings are the vertices. The works appear to be pulsating. The transition of colors — from navy and burgundy to light orange and blues — creates an optical vibration. 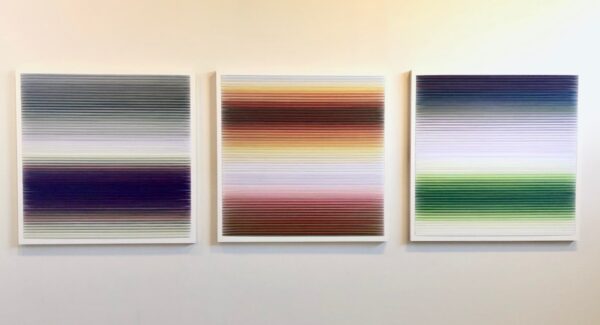 In the gallery, Coalescence #1, Coalescence #2, and Coalescence #3, newer works, are presented as a triptych. Your eye moves horizontally, from piece to piece, and amends the spatial disconnect between the three. Kim often creates vertical movement as the predominant force, but here the triptych presents a nice change of reading style for the viewer. They play well off each other, like a song that transitions between different rhythms — the individual sounds are distinct, but the overall performance is both smooth and exciting.

The most powerful thing about the show, however, is not its aesthetic or technical prowess — but rather its ability to offer a temporary calm in our chaotic moment. While works that speak loudly to our troubled times are needed, works that offer solitude and escape are also needed. Kim’s works encompass both of these needs: the portrayal of a shifting life through visual moments of color disruption, while gently quelling it through smooth transitions and soft textures. The individual threads fluctuate like competing sound waves, but ultimately coalesce in immaculate orchestration.

After “listening” to the works’ soft melodies, I left Ro2 feeling centered and rejuvenated. And I look forward to the next time we get to hear Kim’s sweet sound.