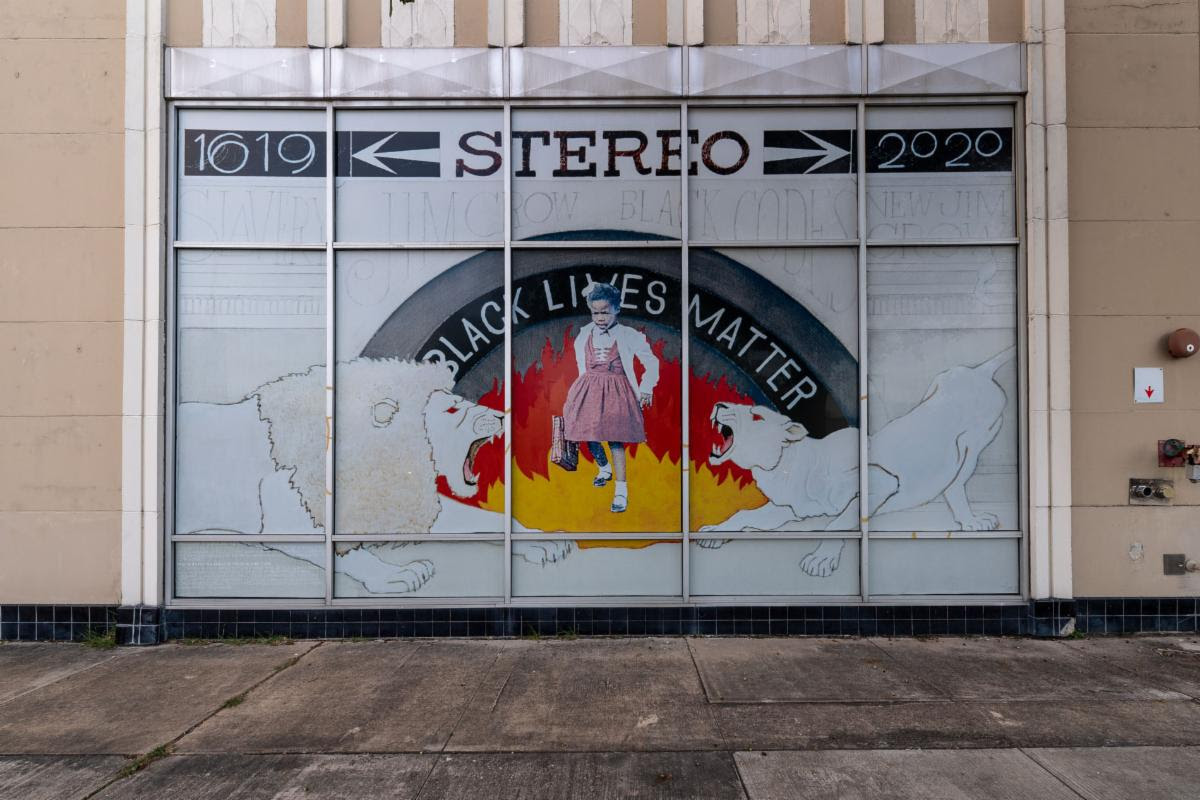 Installation image of The Little Girl in the Lion’s Den by Tierney Malone.

Houston’s Lawndale Art Center presents The Sankofa Project (Sankofa is the Ghanian word most commonly translated as “one must acknowledge the past in order to move forward”). The project focuses on historical events over multiple years, beginning in Houston, and aims to “bring light to the events that have been censored or ignored in historical narratives in order to reinforce the racial oppression of Black Americans.”

Curated by Houston-based artist Tierney L. Malone, three artists’ works will be commissioned by Sankofa and be shown in Lawndale’s east-facing windows on Main Street, in addition to public programming including a podcast, to facilitate community dialogue. The works commissioned will present each artist’s contemporary American experience and will be “related to the work of scholars and historians who are leading conversations on race and inequality.”

Currently up (as of mid-October), the first project from Sankofa and Lawndale is Malone’s The Little Girl in the Lion’s Den. It will be on view through January 16.

“This work is inspired by the countless women who suffered and survived chattel slavery and those who were dedicated warriors in the struggle against the American caste system,” writes Malone. The artist’s statement tells of women’s trauma and perseverance through slavery, only to face 100 years of Jim Crow laws.

Malone goes on to describe the imagery in Little Girl, with references to  the biblical stories of Daniel in the lions’ den, and Shadrach, Meshach and Abednego. Malone writes: “In the drawing, the central figure is a little girl who is walking through the furnace of racial intolerance and facing the angry lion’s of mob violence. The little girl is 5-year-old Ruby Bridges, who in 1960 bravely integrated a New Orleans school. Alone, she faced an angry mob of white citizens who opposed her pursuing an education at a public school to which her parents and community contributed taxes. In the drawing, all this takes place in front of the American cathedral built on the oppressive systems of slavery, Jim Crow, Black Codes, and a racial caste system that continues to present day.”

For more on the project, please go here.

Tierney L. Malone is a visual artist and modern day storyteller who uses the canon of African-American history and pop culture to create mixed media works that challenge contemporary culture and politics. Malone has exhibited his art widely throughout Texas and the United States, including numerous solo exhibitions. His works are in the permanent collection of the Museum of Fine Arts, Houston; the Kansas City Jazz Museum, Kansas City, Missouri; Goldman Sachs, New York, New York; and the Federal Reserve Bank, Houston, Texas. He is the recipient of the Louis Comfort Tiffany Foundation Grant, a CACHH Visual Artist Grant, and a Kimbrough Visual Artist Grant.