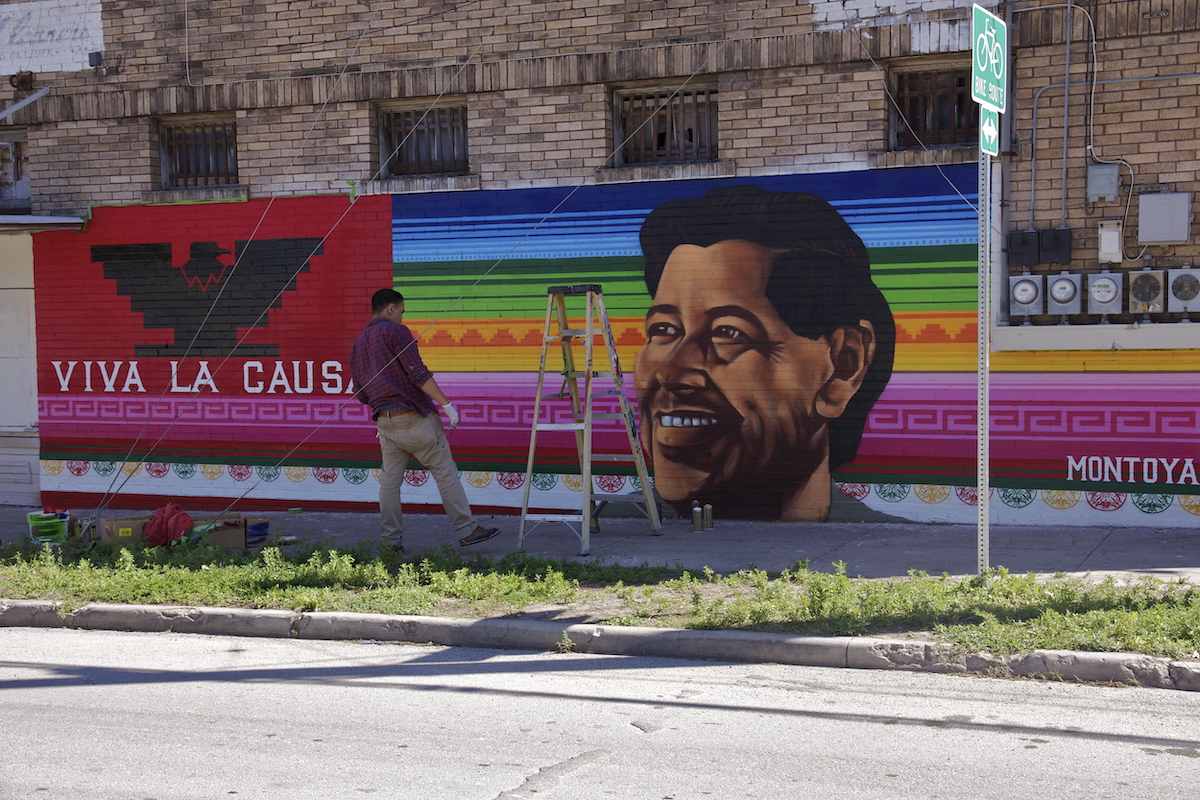 San Antonio artist Christopher Montoya in front of his mural in 2015. Photo courtesy of the artist. https://www.instagram.com/artista_montoya/

Note: This is the winning essay of the 2020 San Antonio Glasstire Art Writing Prize.

Tooling down South Flores Street from one thrift store to another in April 2014, I passed what has become one of my favorite works of art in San Antonio. On what was a plain tan brick facade the week before, now installed was Christopher Montoya’s mural of Cesar Chavez, the labor rights leader and cofounder of what became the United Farm Workers (UFW) union.

The design of the mural is relatively simple, even spare. The main elements are the portrait of Chavez and the UFW flag superimposed on a background of ombre color gradients with geometric motifs. Under the flag, which is anchored in the top left corner, is the rallying cry “VIVA LA CAUSA,” the slogan featured on many political posters produced during El Movimiento, or the Chicano Movement, in the 1960s and 1970s.

I had to pull right onto Pruitt Avenue to take a longer look.

Painted using stencils and aerosol, Montoya plays with tradition and modernity. My eye was initially drawn to the background, whose colors are reminiscent of Mexican serapes and extend the full length of the mural. The background almost vibrates against the portrait of Chavez and the UFW flag. After I considered the portrait of Chavez, offset from the middle of the mural, I examined composition as a whole, and I was hooked. The mural looks like a sly spoof of the American flag. I’m not sure Montoya intended this reading, but I enjoy it, especially with the papel picado motif stencils along the bottom — the mural is both serious and sweet at the same time.

This was certainly not the first Cesar Chavez mural in San Antonio, and community murals of the legendary organizer can be found in cities all over the United States. They are concentrated particularly in California and along the U.S.-Mexico border. San Antonio has many excellent examples of the community mural tradition, including the epic murals begun in the late 1970s and painted through the early 1980s at the Cassiano Homes Apartments. What I like the most about Montoya’s mural, though, is its design, balance, and color.

In addition to the mural itself, I also like its location. South Flores Street is a heavily-traveled commercial strip running the length of the South side. The mural is installed just north of the I-35 overpass, where the neighborhood is beginning to show increased signs of gentrification — the mural reflects the history and ethnicity of the people who might be displaced.

Murals like Montoya’s make manifest a political act the Bay Area artist Jenny Odell calls “resistance-in-place.” In her 2019 book How to Do Nothing, she suggests placing a greater value on “non-scripted spaces” — and I would count South Flores Street as one of these unscripted spaces, where the story of the place is being written and rewritten all the time by the City of San Antonio, commercial forces, and the residents of the place itself.

Don’t get me wrong. Scripted spaces for art — namely museums and galleries — are extremely important for the community in many ways. But I also appreciate that the mural was painted by a self-taught San Antonio native.

Montoya, who was 21 when he painted the mural, had already established himself as a public artist of note with his 2012 mural of Selena, which is located further down South Flores Street. As he told me in a 2019 interview, the Chavez mural was one where he wanted to show a connection between the community and the cityscape.

At least a couple years after its installation (and I was lax in not documenting it), the mural was tagged in white paint across Chavez’s smiling face. By 2019, the mural was touched up. The restoration is imperfect; likely, the only person who could have done it justice is the original artist, but the fact that Montoya was not the person (or people) who restored the mural shows that others in the community acknowledge its value.

The mural, then, is beautiful in its layers: Montoya’s original work is evocative of tradition while still showing individuality; the tag illustrates another, more nihilistic, aspect of the cityscape; and the restoration reinforces the strength we see when people resist in place and take care of what they value.

While museums and galleries learn to adapt to the pandemic, San Antonio has a rich history of outdoor art that we can appreciate every day while we stand six feet apart, gazing. Christopher Montoya’s mural of Cesar Chavez is an excellent place to start.