Interview: What It’s Like to Live Between Two Worlds

In his 1934 poem The Rio Grande, the Brownsville-born scholar and writer Américo Paredes addresses the river: “For I was born beside your waters, / And since very young I knew / That my soul had hidden currents, / That my soul resembled you.” The poem is from Paredes’s Between Two Worlds, the poetry collection that inspired an exhibition of the same name now on view at the University of Texas at Austin’s Visual Arts Center. I recently interviewed the exhibition’s curator and participating artist Jesus Treviño, along with participating artists Cande Aguilar, Jessie Burciaga, and Samantha Isabel García about how — like Paredes’s poem — Between Two Worlds speaks to the Borderlands and its soulful hidden currents. 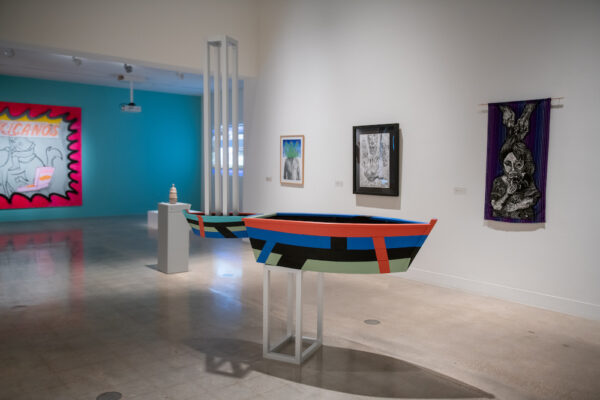 Lauren Moya Ford: The exhibition is described as an exploration of “bilingual aesthetics.” What does that term mean?

Jesus Treviño: I was referring to the bilingual aesthetics that Ramón Saldívar pointed to in his book The Borderlands of Culture: Américo Paredes and the Transnational Imaginary (2006). When I was making this proposal, I was thinking that there were these two worlds that clash against each other, that are at odds. That felt wrong, and I couldn’t really contextualize how I wanted to celebrate the city (of Brownsville) and this melting pot and its blurred lines. (At the time) I was emailing with Óscar Cásares, a UT Creative Writing professor, and he pointed to language: the code switching that we use, the made-up words like parquear, that are unique to that in between-ness, and how that’s being used in the visual culture, and in the art that we’re making. 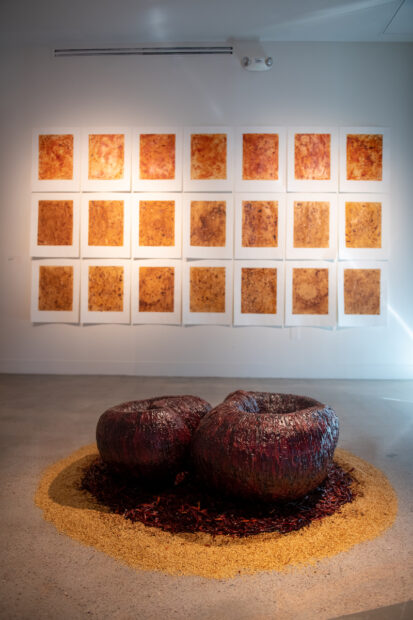 Samantha Isabel García: My first language is not English. All my life I’ve lived on the Border, and you always have people (around) who are speaking English, so you learn when you’re very little. I think that makes you pay extra attention to words. With my artwork working with chiles, one of the main things I struggled with was the title: how to capture the experience with one title. [In one work], I ended up with the word “diversion,” which in English has to do with political pandering. But the word with the same spelling in Spanish is diversión, which means fun, and that is related to the chanting at the rallies of Donald Trump back then in 2016. So it’s the code switching, but it’s also paying attention to your own language and the one that you acquire, and how you use them both to make sense of the world. 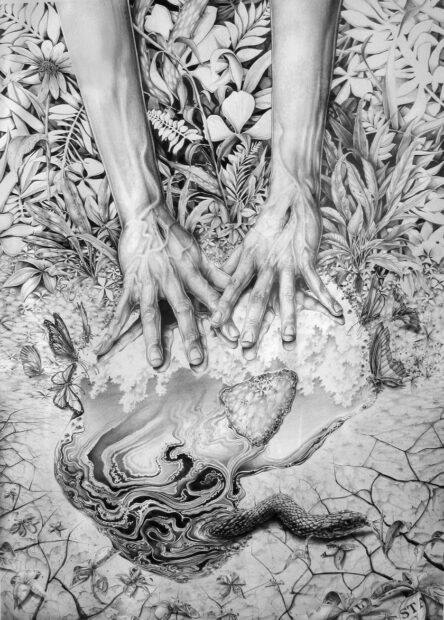 LMF: The show’s description also uses the term “artists” instead of Latinx, Mexican American, or another label. What do y’all think about these terms?

JT: There are so many people in this show, and everyone has their own way of identifying themselves. For me, being on the Border, it was hard for me to identify as Mexican American just because of how disconnected I felt from my family and my culture. But it’s funny how, moving away from the Border, it felt easier to identify as a Mexican American artist wanting to work with those themes. So it’s a big part of my work, but it’s also so personal and unique to each individual. 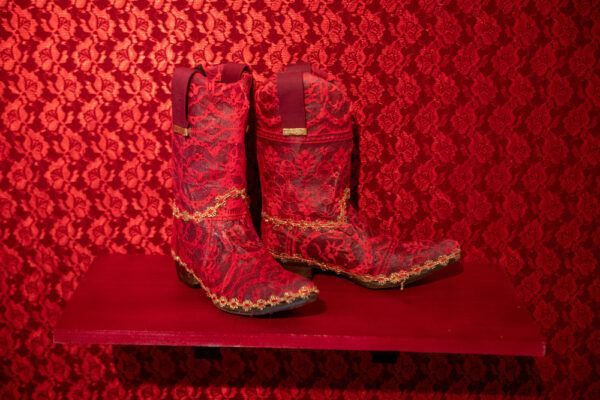 SIG: I moved to New York, and when I asked people where they’re from, people would answer, “I’m Dominican.” And I would ask how long they’ve lived in the city, and they’d be like, “Oh, I was born here.” They were like third or fourth generation or more, and it’s very different (from that) in the Valley. In New York people really identify with where their family comes from. I keep reflecting on it, especially now with the whole “Latinx” thing, but I haven’t landed on a specific term to identify myself with. 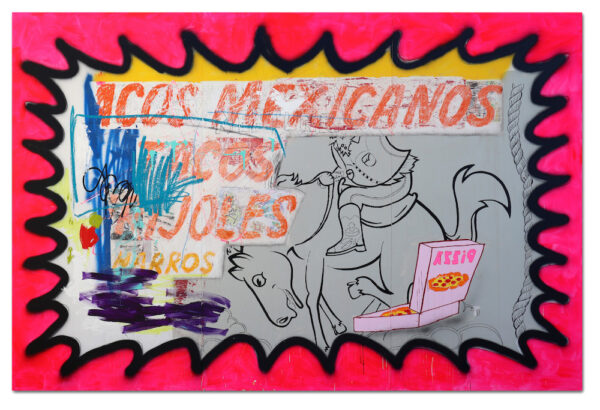 Cande Aguilar: I keep hearing these terms about identity, but I cannot relate on a personal level. I feel like I’ve always been from this area. I never felt like I had an identity problem because I traveled a lot when I was a kid. When we were touring, there was always somebody there from Brownsville who had moved away at some point. In a way that made me feel connected to where I come from. Even though we’re considered to be either American or Mexican, we’re sort of in this limbo or middle ground, which is fine because we also hold the key to both sides.

LMF: Jesus, you included various generations of artists in this show, not just folks in your exact age group. Can you tell me more about that? 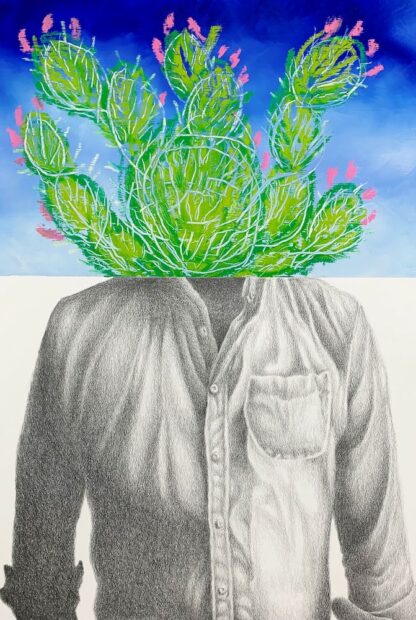 JT: Legacy and lineage was a big part of how I wanted to frame the show. There’s (ceramic artists) Julián Rodríguez and his apprentice Ceci Guzmán. And there’s the lineage of the school – the University of Texas Rio Grande Valley – where me and Jessie’s teacher was [fellow exhibiting artist] Alejandro Macias, and his teacher was [fellow exhibiting artist] Noel Palmenez. [At UTRGV] there was a passing down of visual aesthetics and sensibilities and approaches to art. 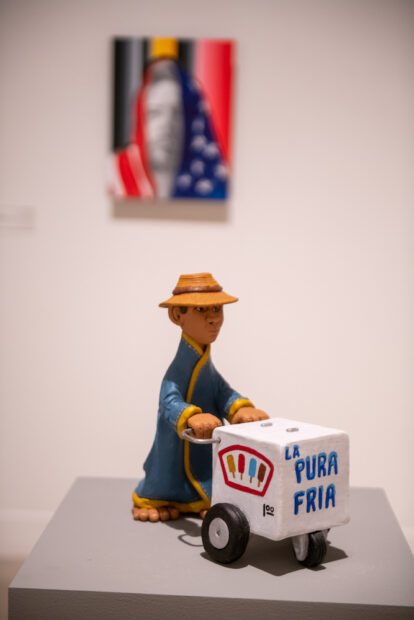 LMF: The city of Brownsville is a major protagonist in the show. What’s your relationship to this very unique place?

SIG: I don’t see it as a limbo [to be in Brownsville]. I see it as a symbiotic relationship between both sides. I have my family living in Brownsville — older generations from a long time back — but my mom ended up on the Mexican side. So, both cities are my cities. We see it right now with the closing of the Border: a lot of stores are suffering on the Texan side because the money comes from the other side, and vice versa. So we have a relationship that is very strong and goes beyond language or family. It affects the deepest core of the region.

JT: It is a movement or a flowing, a balancing act. We’re straddling in between, but it isn’t two separate places, it feels like one that has this division in between that doesn’t make much sense.

SIG: Geographically and visually, when they started creating the Border wall, it had such a big effect because we used to think of it as one place that was connected by the river, even though the river was supposed to divide them. It was connected by a bunch of bridges, but then all of the sudden it was this weird-looking thing in the middle. It just didn’t make sense. It was beyond an eyesore: it was going against the whole culture. And I don’t think even to this day we accept that as a reality of the Valley at all. 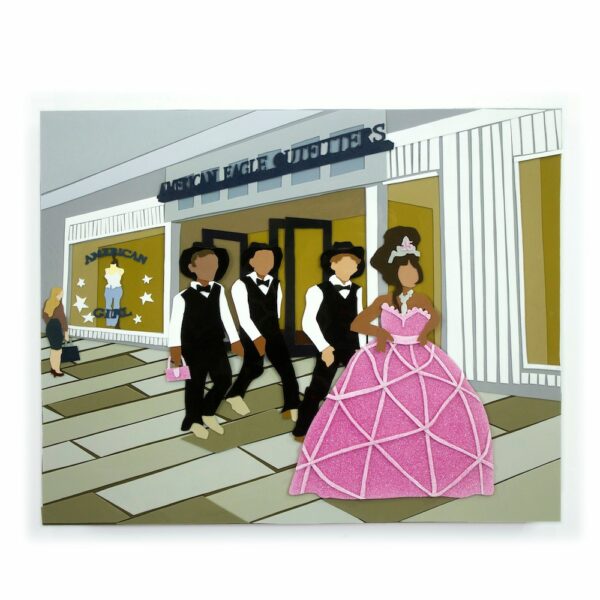 LMF: Now that the show is up, have you gained any new insights?

SIG: Coming from Brownsville, a lot of times we feel that we could be overlooked. [For example] it took a long, long time for artists from Brownsville to be included in the Texas Biennial. So I appreciate this opportunity, and the connection coming from UTRGV, though different generations [of artists] and how we’ve been connected.

JB: I see the show as the mouth of the river, la boca del río, where these two bodies of water meet, and it’s a mixture of the American and Mexican cultures, and it creates this ecosystem where life looms. 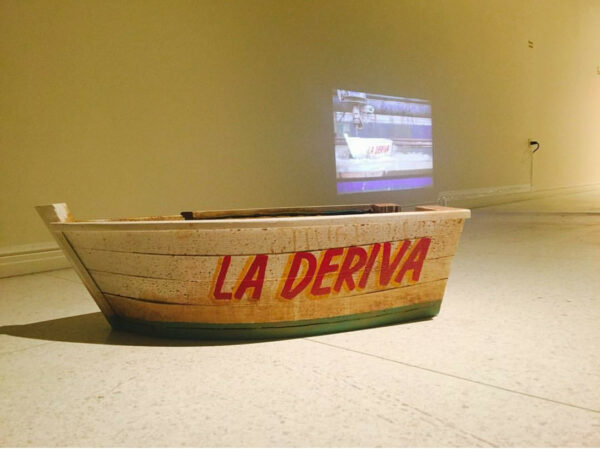 CA: [The current moment] is something that I’ve been looking forward to for a while. And to see the quality of art that’s been coming out of Brownsville finally, and the ability of the young artists to communicate and not be so de rancho, as they say, like very socially awkward, which was not too far back from now that things were like that. I think that what’s next is that an aesthetic is going to form, and it’s going to eventually resonate with the Border and South Texas. We’re in the early stages, but it’s just a matter of time.

JT: It’s something that’s been wanting to happen for a long time. A huge part of the art scene is community and family. We’re all together, helping each other, wanting to show with each other, and informing each other, and to share that with an outside world means a lot. This is kind of the first time that [something like this has] happened. Hopefully we can build from it.

Between Two Worlds is on view at the University of Texas at Austin’s Visual Arts Center through November 20, 2020. This interview was edited for length and clarity.