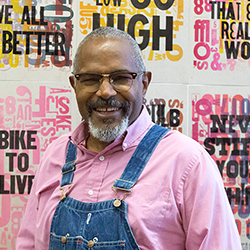 Kennedy is an American letterpress printer, book artist and papermaker based in Detroit. He is best known for social and political commentary, particularly in printed posters. An AT&T systems analyst until the age of 40, Kennedy switched careers after being inspired by an 18th-century print shop and book-binding demonstration at a Chicago museum. He attended the University of Wisconsin-Madison, studied under legendary book designer Walter Hamady, and earned an MFA in 1997. He later taught graphic design at the Henry Radford Hope School of Fine Arts at Indiana University. In 2015, Kennedy was honored as a United States Artists Glasgow Fellow in Crafts. Kennedy has been featured in the 2008 documentary Proceed and Be Bold! by Laura Zinger.

Previous speakers for the series include Danielle Demetria East and Esther Gabara. For a full schedule of the Fall 2020 speakers and events (including the 2020 Texas Metals Virtual Symosium) please visit the Landmark Arts website here. To register for the event and receive the Zoom link, please go here.