A Rarely Seen Chinese Minority Culture on View at SAMA 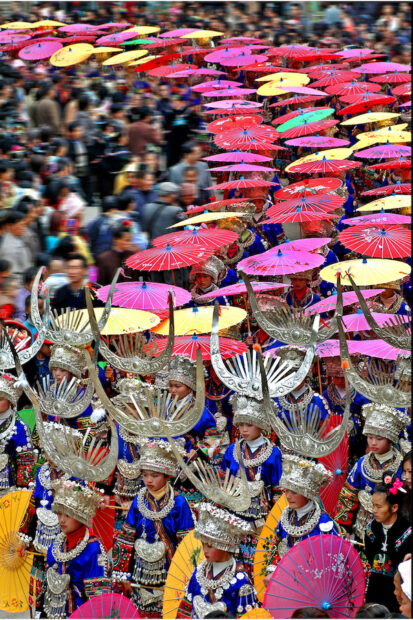 Exquisite Adornment, a recently opened exhibition of jewelry and clothing from the Chinese Miao, Southeast Asian Hill Tribes, and Central Asian Turkmen peoples, previews what will be a significant expansion of the San Antonio Museum of Art’s already considerable collection of Asian art. Most of the show comes from the personal collection of longtime SAMA supporters Elizabeth and Robert Lende, who’ve promised the elaborate array of headdresses, earrings, necklaces, bracelets, dorsal pendants, textiles, and other objects to the museum.

“SAMA has been working hard to continuously grow its esteemed Asian collection, by including more cultures, especially those underrepresented,” says Shawn Yuan, the exhibition curator and SAMA’s Associate Curator of Asian Art. “This group of gifts from the Lende’s will be an important addition to our Asian and Islamic collections.”

Exquisite Adornment showcases three distinct visual cultures created by marginalized groups occupying the fringes of the hegemonic states that shaped the world around them. It’s an absorbing display of technical virtuosity and aesthetic sophistication, and represents SAMA’s evolving relationship with Asian art and the complex histories of the migratory cultures represented within. 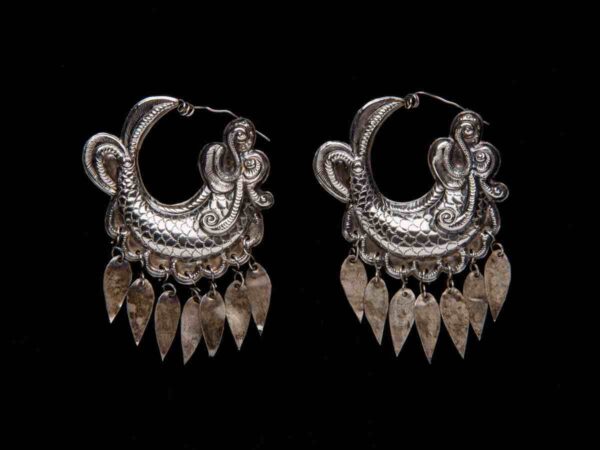 Pair of Earrings, China (Miao), first half of the 20th century. Silver, each 1 7/8 in. Promised gift from Elizabeth and Robert Lende. Photo by Seale Studios.

While plenty of space is given to each of the three umbrella groups represented, some of the show’s most visually stunning pieces, and the riotously colorful photos used in its advertisement, come from the Miao people, one of 55 nationally recognized minority groups in China. (The 56th nationally recognized ethnicity is the Han majority, which makes up more than 90% of China’s population.) Miao people are spread across southwestern China, but most of the works in Exquisite Adornment come from Guizhou province, a mountainous, landlocked, historically hard-to-reach corner of the country. The highland Miao villages in Guizhou are about as geographically remote as a culture can be in mainland China, self-isolated at high altitude and thus preserving the unique hybrid visual styles on view.

Hairpin, China (Miao), first half of the 20th century. Silver, 5 3/16 in. Promised gift from Elizabeth and Robert Lende. Photo by Seale Studios 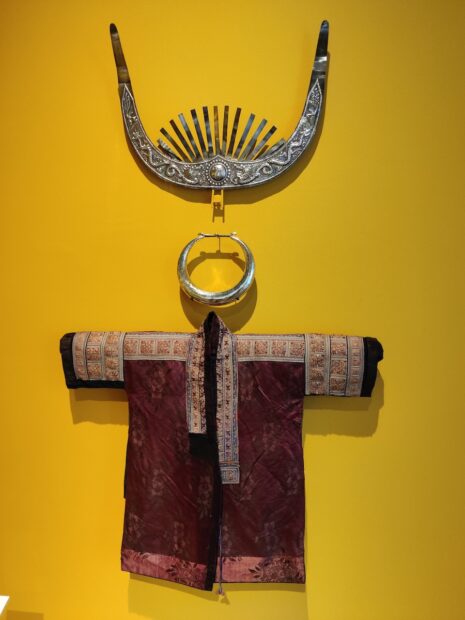 Standout items like a massive, ox-shaped headdress and a finely wrought silver dragon hairpin justify the show’s title: the craftsmanship on display is undeniably exquisite. Many of the earrings, pendants, and necklaces employ multiple techniques, delicate combinations of repoussé, filigree, chasing, hammering, casting, welding, and granulation. Even the clothing involves an intricate and laborious production process. One garment demonstrates a black-sheen technique specific to a handful of Miao villages in southeast Guizhou, through which a piece of fabric is dyed with locally grown indigo, coated with a mix of egg white and pig blood, beaten with a wooden mallet until crisp and glossy, then finished with a heavy stone roller for extra shine. 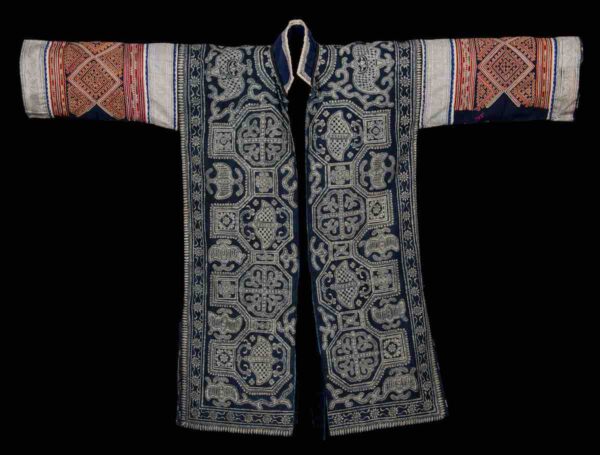 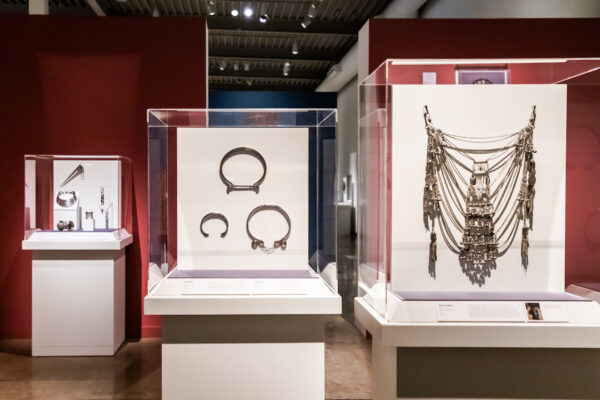 But silver is the star of the show, the material uniting these three cultures. It’s heaviest in the Miao jewelry sets, which can weigh up to 30 pounds and contain a crowded iconography. Butterflies are a ubiquitous motif seen across the Miao silvers, along with chrysanthemums, birds, bees, fish, frogs, and mythical creatures like phoenixes and dragons.

The latter, according to curator Yuan, is an index of domination, dragons having been a symbol associated with conquering Han, Mongolian, and Manchurian emperors over the millennia. “Miao silversmiths took great liberty in transforming Chinese dragons into more hybrid types that fit into their beliefs,” explains the title card for one particularly arresting and massive-looking silver necklace [below]. It’s adorned with dragons, a dangling set of miniature weapons that Yuan says reflects the incorporation of Chinese aesthetic influences into Miao art around 2,000 years ago, and a few dozen silver bells. 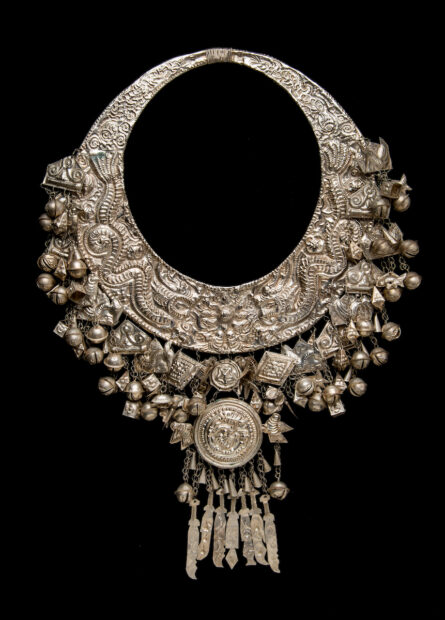 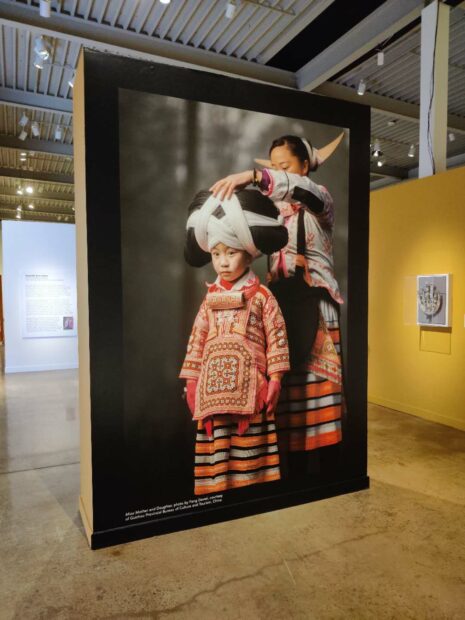 Photo by the author

SAMA does a good job of communicating the uses of these items in wall texts, but in the silent, socially-distanced gallery setting it’s hard to get a sense of how loud they are when worn during weddings and New Year celebrations. The museum partnered with the Guizhou Provincial Museum and Guizhou Provincial Bureau of Culture and Tourism to display a few photos that help get across the sensorial density conveyed by these adornments when worn by large groups. 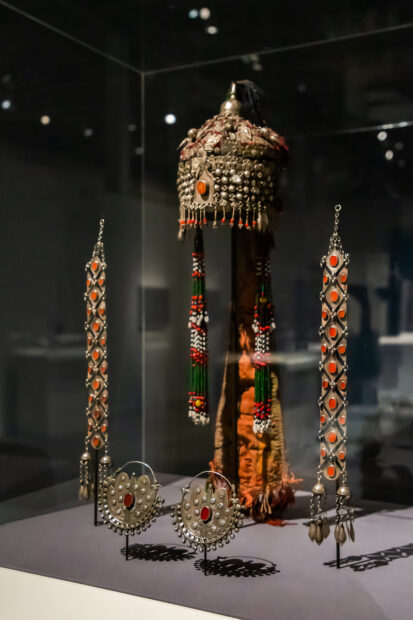 The Hill Tribes and Turkmen pieces in the show are no less elegant in their comparatively more abstract designs. Like distinct Miao groups spread across different provinces in China, the Hill Tribes occupy a diffuse border zone straddling multiple sovereignties (Myanmar, Thailand, Laos and Vietnam), and their material culture reflects hybrid influences. So do the leather-strapped and carnelian-studded pieces from the Turkmen culture, a group of nomadic tribes historically bordered by China to the east, Russia to north, and Persia to the south. New World silver was a highly valued commodity in Asia from the 16th century on, and the three groups represented in Exquisite Adornment would have been indirectly connected via ancient trade networks like the Silk Road and the lesser-known Tea Horse Caravan, which connected Southeast and Central Asia via China. If you look closely in the Hill Tribes and Turkmen galleries, you can see the traces of centuries of globalized trade incorporated in elaborate vests and headdresses with sewn-in cowry shells, Indian Rupees, and silver coins from Europe. 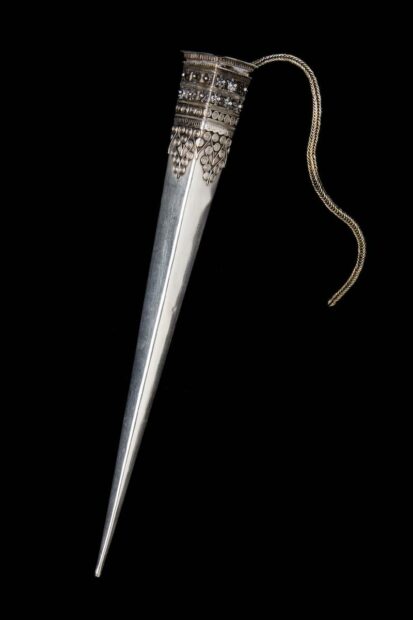 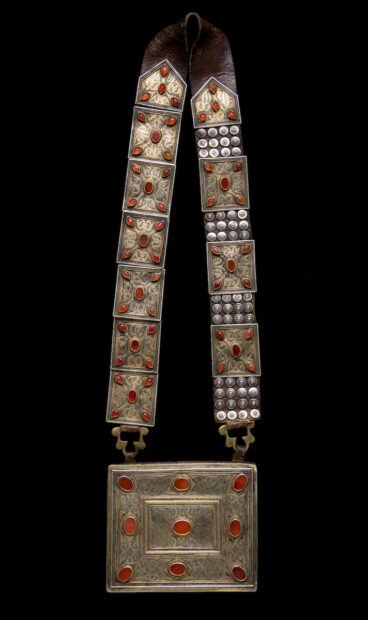 There’s plenty to spend time getting absorbed in throughout Exquisite Adornment. A long-armed silk coat and elaborate Qur’an holder in the Turkmen gallery and a hairpin that doubles as a tobacco stash box from the Hill Tribes gallery stick out in memory. But the central theme of the exhibition — highlighting the artistic achievement of peoples “subjugated by other dominating peoples and pushed to the most inaccessible and marginal areas,” in Yuan’s words — feels most poignantly and urgently expressed in the case of the Miao jewelry and clothing.

Yuan says that the Miao items in the show were made in the late 19th and 20th centuries, a time of unprecedented upheaval in China. The Qing dynasty disintegrated in 1912, and the country was ripped apart by WWII and an ensuing Civil War. The violent paroxysms of the Cultural Revolution from 1966-1976 disrupted silversmithing among Miao communities in Guizhou, according to Yuan. Economic reform in the ‘80s allowed Miao craftsmen to revive their trade for a new, international clientele including collectors like the Lende’s. (The couple is shown on a 1996 trip to a Miao village in Guizhou in an introductory wall text framing the exhibition.)

In absence of a written Miao script, these cultural forms have persisted (along with music) for centuries as the primary expression of their culture in the face of a dominant, assimilationist overclass. It’s hard to view these works in isolation from present-day programs of cultural assimilation in China, like the mass internment of Uyghurs and Turkic Muslims in Xinjiang, or a new series of reforms enforcing Mandarin as the default language of education in Inner Mongolia. 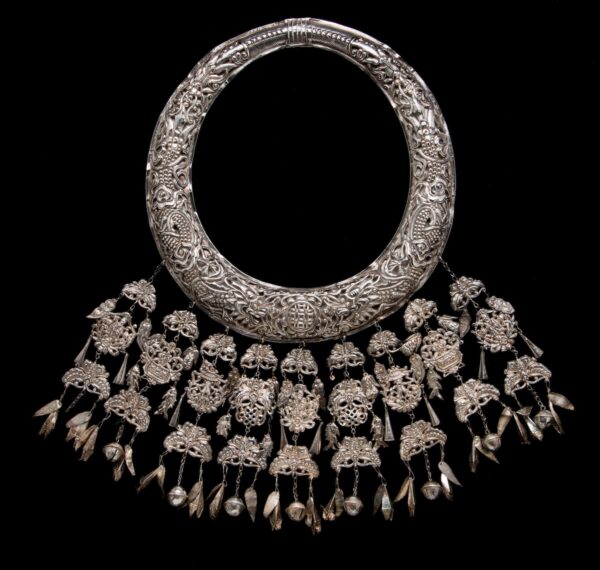 Though the Miao jewelry and textiles on view in Exquisite Adornment were made in the last century, the images they contain go much further back in time. The craftsmanship on display represents a people creating a cultural space on the margins, and sustaining it there. Exquisite Adornment presents a side of Chinese visual culture rarely seen: SAMA is only the third museum in the United States to show some of this material, following the Metropolitan Museum in New York and the Art Institute of Chicago, according to Yuan. The museum’s collection of Chinese art otherwise consists mostly of the material culture of the conquerors, not the vibrant subcultures at the fringes.

Last year, SAMA received the permanent gift of a massive, picturesque rock from Wuxi in China’s Jiangsu province, one of San Antonio’s sister cities. It now rests on a lawn overlooking the museum’s lushly planted private stretch of the River Walk. Wuxi’s vice mayor encouraged SAMA to partner with the Wuxi Museum, resulting in the recently closed Elegant Pursuits, which deftly showcased elite Qing dynasty literati culture. Exquisite Adornment is a welcome expansion of the museum’s perspective on Asian art, and a prod to think more deeply about the resilience of marginalized cultural practices across time and space.

Highest Heaven at the San Antonio Museum of...