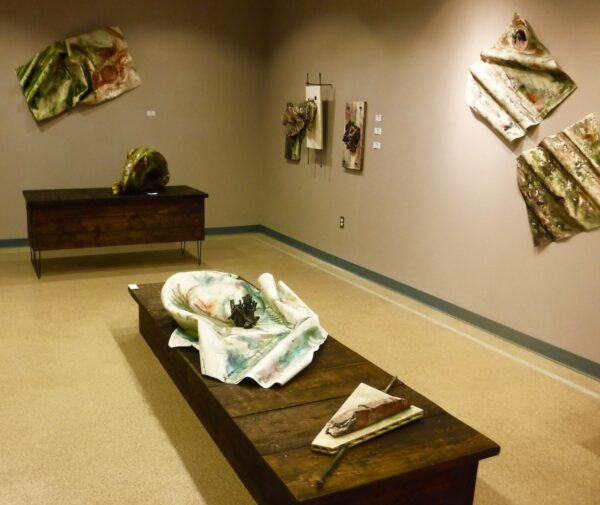 Installation view of Jami White’s solo exhibition, The Search: Terrain: Tension and Resilience, at the Diana Ling Center for Academic Achievement at LCU in Lubbock

Jami White explores some of these same ontological questions of singularity-immensity, time, and being in her exhibition The Search: Terrain: Tension and Resilience at the Diana Ling Center for Academic Achievement in Lubbock. Ostensibly, White’s subject is earth, in theme and in material: her sculptures in clay possess the tectonic bulk — both in the construction and the geological senses — of Caprock erosions, fossils, and stalagmites. Each work is itself a typography, demonstrating forces (inundation, extrusion, stress, scoring, staining) that scar and shape the literal landscape and that of the self alike.

The earth’s terrain and one’s sense of being are forged from without and within. The processes for creating both occur over time, are ongoing, and may be as traumatic as a volcanic eruption, or as gentle as the imprint of a leaf in mud: either event can change a geography. “The landscape that weathers storm after storm and perseveres has a wisdom and strength that seems eternal compared to our relatively short lives,” White explains. Her methods of panning outward (using Google Earth to explore places of her past), then zooming inward (to investigate how intimate connections with place form identity), allow White to “freeze ephemeral moments while allowing the past, present, and future to collide in the physical world.” 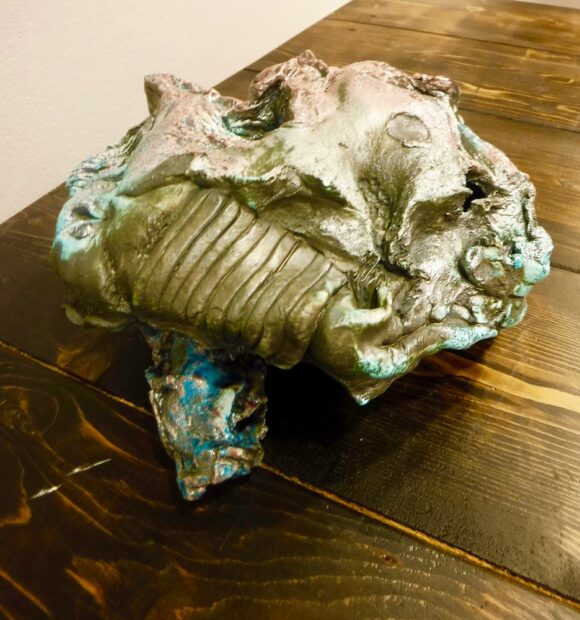 One example of collided-frozen moments is Expanded Terrain (stoneware), which alludes to upheavals and compressions. Iridescent-metallic glaze lends an otherworldly beauty, as though it were a found chunk of meteorite; or it held semi-precious stones mined from the earth, shaped under colossal pressure. It is marked by fissures and open wounds, by regimented incisions, by nodules and craters. It folds back onto itself, protectively. It is simultaneously leaden and graceful. It might have been extracted from the earth, a study in strata forged over time. 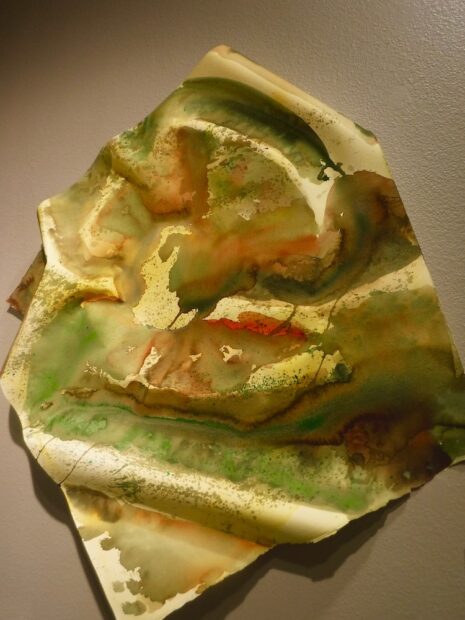 Jami White, Sunset Over the Plains

White’s sculpted paper, by contrast, suggests sky rather than land — not the flat, boundless blue firmament of West Texas, but the undulating skies of van Gogh’s Starry Night. Her Sunset Over the Plains evokes the wind-driven mud-rains of the Llano Estacado, in which earth (dust) and sky meet, freckling everything outdoors with red-brown specks. This piece about the heavens nevertheless reflects the earth, how water pools in Lubbock playa lakes, and flash-floods course through parched riverbeds before disappearing.

After all, these relationships between sky and earth, like ontological inquiry, are elemental.

On view at Lubbock Christian University through October 14.