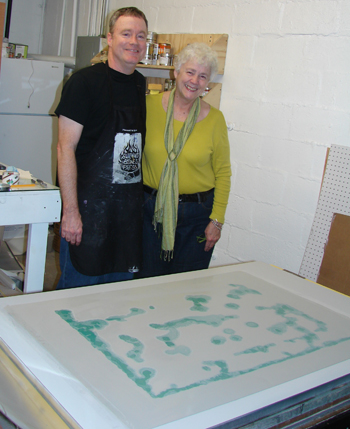 Nancy Luton, a longtime Houston artist, teacher, writer, and arts supporter, died on August 18, 2020 at the age of 76.

Born in Fort Worth and raised in Granbury, Luton completed an undergraduate degree at the University of Texas at Austin, and then lived in New York City and Peekskill, NY before settling in Houston in 1978. She went on to obtain both a Masters and PhD in English literature at the University of Houston, and she then began to teach and work various jobs in the city, including in the Dean’s office of UH’s College of Liberal Arts and Social Sciences.

After her retirement in 2002, Luton became more involved in Houston’s art community. She was a regular student at the Museum of Fine Arts, Houston’s Glassell School of Art, where she found a community of like-minded artists. Luton took a particular interest in printmaking; she had a background in print — her aunt and uncle in Granbury owned the Hood County News-Tablet, a local newspaper.

As she grew more involved in printmaking, Luton she began promoting print work across Texas and became involved in printmaking organizations, including the Women Printmakers of Austin (WPA). Houston artist Andis Applewhite recalled traveling with Luton to Austin for a WPA meeting in 2003, saying “All the way to and from Austin we talked about printmaking and maybe some other minor topics I can’t remember now. From paper to ink to technique, all were discussed with personal likes and dislikes. That was the first time I was exposed to how serious and interested she was about printmaking. Nancy had a gift of expressing her enthusiasm about anything she liked and we are fortunate to have had her enthusiasm and involvement directed our way.”

In 2009, when five Houston artists founded PrintMatters Houston, an organization dedicated to supporting printmaking artists in the city, Luton was at their side, ready to support the organization’s endeavors. As PrintMatters’ programming grew, Luton became increasingly involved. She financed the organization’s inaugural Rockin’ Rollin Prints event, for which community members and printmakers came together for a day of large-scale woodcut printing using a steamroller. The event became the group’s staple event throughout the mid 2010s.

Luton further silently supported Houston’s printmaking community by helping create Burning Bones Press, a printmaking studio in Houston’s Heights neighborhood. Co-founded by printmakers Carlos Hernandez and Patrick Masterson, the press has quickly become Houston’s best-known printshop and community studio. In a typical, generous act of support, Luton purchased, among other things, a large-scale press for the print shop. Hernandez told Glasstire that “it is because of [Luton] and her contributions that BBP was able to begin a new chapter in Houston printmaking.” He added: “Even though all of us at the studio are sad of her loss, we will always be greatful in our hearts to know the reason we are in the studio is to create, just as Nancy did when she was able to come and work. She always had a story to share about her life’s experience.”

In addition to her support of Burning Bones, Luton was involved with the printmaking program at the University of Houston. She worked with Masterson, who is also a professor at the university’s School of Art, to restart the university’s editioning program, the UH School of Art Fine Art Press. Luton’s gift enabled Masterson and UH students to work with artists to create editioned works using the university’s print lab. Prints created through this program include works by UH professor Gael Stack and UH alumnae Melinda Laszczynski and Kelli Vance, among others.

Though her focus was on print-related projects, Luton also was supportive of arts writing. She was an instrumental funder of Pete Gershon’s celebrated book Collision: The Contemporary Art Scene in Houston, 1972-1985. Of her support, Gershon told Glasstire: “I was so happy to know Nancy Luton. She was funny, kind, talented, and extremely generous. She was also the primary financial angel behind Collision, and anyone who enjoyed the book has her to thank.”

Luton is remembered by her friends as a generous, sharp, and funny woman who was always front and center when something needed to be done. Multiple individuals in Houston’s art community called her an “angel”; although she never wanted or expected public recognition for it, her support extended far and wide.

In honor of Luton, PrintMatters has established The Nancy Luton Student Scholarship Fund, which is designed to encourage students to pursue printmaking, and to “send a message to the universities that printmaking is an important medium to support.” Donations can be made to the scholarship here.

Nancy was an avid supporter of The Printing Museum during my time there. She was such a lovely, warm person and will be deeply missed!

Marched with Nancy and others in early 2017. She shared a passionate and committed life

Truly Nancy Luton was a wonderful special loving generous and talented woman. She wanted to make a difference, and succeeded!

Nancy was a charming & friendly person. Her generosity to the art community will be remembered with love & appreciation.

Nancy shared her art filled home, art materials, fabulous guacamole and brownies for our “Collage Club” group beginning in 2016. We chatted, laughed and stretched our creativity under her watchful, supportive eyes. She will be missed by many.

Nancy was a beloved friend. I miss her every day. We made reams of handmade paper together over the years and collaged together for the past three years. What a joy to know her and make art together.