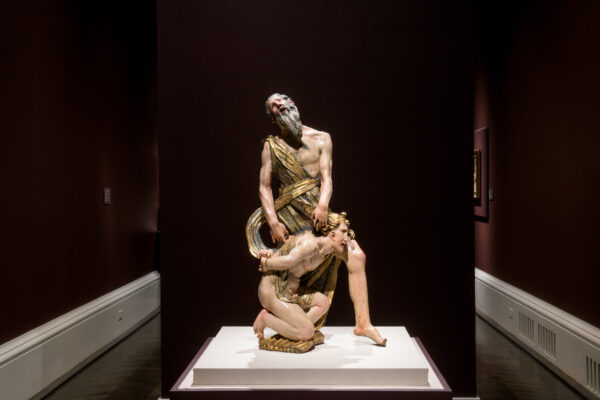 Alonso Berruguete: First Sculptor of Renaissance Spain at the Meadows Museum in Dallas features works that contextualize one Spanish artist’s contributions to the Renaissance period. Essential to understanding the show, alongside the Museum’s mission to lead the nation in exploring Spanish arts and culture, is that Spain intersects several histories, but that its contributions to art during the time aren’t as commonly assumed. Berruguete is a worthwhile subject for understanding Spain’s role in global affairs because he lived and worked within a timeline of expansion, art patronage, and empire.

The exhibition is oriented to lead the viewer through the art movements of the region at the time, so as to give full context for Berruguete’s scope of excellence. The inaugural work, a single figure from one of massive altarpieces commissioned at the time, is an example of Berruguete and his teams’ ability to create emotive sculpture that simultaneously flouted convention with improvisation while innovating on style. The next gallery contains works that position Berruguete among his contemporaries, and the center gallery gives a to-scale example of how his installations would have existed in a Spanish church.

Like his contemporaries, Berruguete worked within the Spanish court system, in which Spanish churches would commission large-scale altarpieces. It was an institutional approach to art making. We remember individual artists in these times (Raphael, Michaelangelo) for their talent, which transcended standards and put their own spin on beautiful religious motifs, as in annunciation and adoration scenes. Alongside these savants were the drafts workers: the gilders, the sculptors, the architects, and all others involved in the fabrication of these massive cultural sites. Berruguete operates somewhere in the middle, as a highly-skilled traditional artist who oversaw multiple court-commissioned site projects throughout his life. 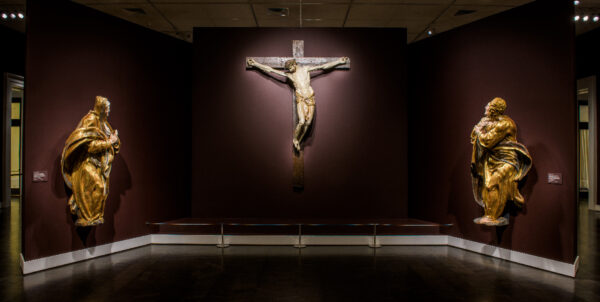 The immaculate polychrome sculptures featured here imply the European continent’s image as one of aesthetic excellence. The works in the Museum’s rear hall, an adoration scene featuring biblical Magi, provides ethnic specificity (differing skin pigmentation and cultural dress amongst the Magi) not seen in more ancient iterations of the story. The curators state that this is a possible indication that the growing globalization that the Spanish empire brought about became increasingly and commonly reflected by religious scenes that the Church commissioned.

The center gallery features several altarpieces reinstalled to give scale to the final work by Berruguete’s studio. Those polychrome statues, fabricated in wood and then painted and gilded, are of a more classical, i.e. pale complexion. These figures project a false demographic reality, which the Church possibly wanted to take on as the Caliphate was losing ground in the region. The Church’s wealth in gold is reflected in the heavy gilding of the works throughout the show. Spain had so much gold that, rather than paint gold details in as the last layer, in some cases the entire surface of a figure’s clothes would be leafed in gold, and the details painted on after.

Berruguete’s contribution to this period of art history is an excellent case study of individual contribution versus cultural demand. His Madonna and Child with the Young Saint John the Baptist, a circular oil-on-panel painting, is dewy in its presentation, and cloudy in tone. The Madonna haughtily caresses young John the Baptist, looking fondly into the distance. The curators place this piece immediately adjacent to a work that would have been contemporary at the time, The Adoration of the Magi by Master of Sigena. That painting is flat, painted crisply, with a narrative bent that doesn’t lean into any particular mood. The difference between a Spanish artist working in an Italian style and an Italian painter working in a Spanish style raises the question: Just how specific to region are classical styles? Or, perhaps: Is style attributed to the artist rather than the culture that demanded their best work?

The exhibition rewards even a passing interest in Spain’s role in the Renaissance. Berruguete’s figures arrest us on their own merit.

This exhibition is organized by the Meadows Museum, SMU, Dallas, and the National Gallery of Art, Washington, in collaboration with the Museo Nacional de Escultura, Valladolid, and funded by a generous gift from The Meadows Foundation. Promotional support provided by VisitDallas.

Alonso Berruguete: First Sculptor of Renaissance Spain is on view from September 20, 2020–January 10, 2021 at the Meadows Museum in Dallas.

SMU’s School of the Arts and Museum Receive...

Gotta love those sexy old church sculptures. They knew how to put on a good show. Nice wall color too. THE DRAMA! Thanks for sharing.