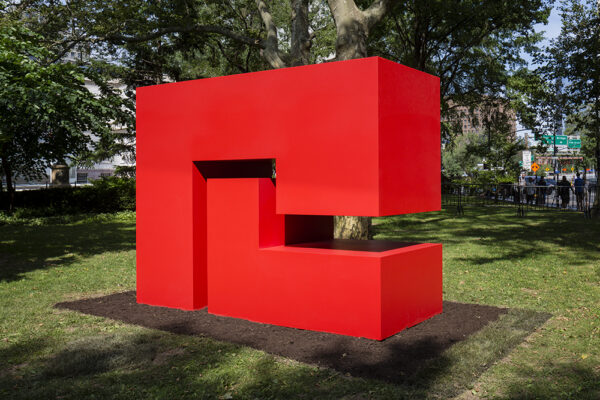 Buffalo Bayou Partnership (BBP) in Houston has announced an exhibition of outdoor sculptures by artist Carmen Herrera. Estructuras Monumentales, envisioned by the 105-year-old (b. 1915, Havana, Cuba) nearly fifty years ago, is Herrera’s first public art exhibition in Houston and the sculptures’ second presentation ever. Last year’s installation at Manhattan’s City Hall Park, organized in partnership with Public Art Fund of New York, was the first. 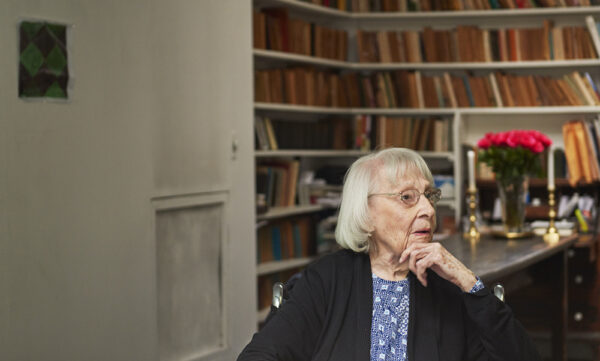 Estructuras’ Houston debut is in celebration of Buffalo Bayou Park’s fifth anniversary, and the works will be accompanied by virtual events, public programs and installations throughout October and through the run of the exhibition. Herrera’s four sculptures will be installed near Henry Moore’s Large Spindle Piece (1969), permanently installed at the center of the site in Buffalo Bayou Park.

“We are honored to host this exhibition by Carmen Herrera, one of our world’s most important living artists, and to collaborate with Public Art Fund and the Museum of Fine Arts, Houston in celebrating Herrera’s legacy,” says Judy Nyquist, BBP Board Member and Co-Chair of the organization’s Public Art Committee. “As this is a highly-visible site in the park, thousands of Houstonians will have the opportunity to experience and be inspired by these works for free, in an outdoor environment that is inviting to all.” 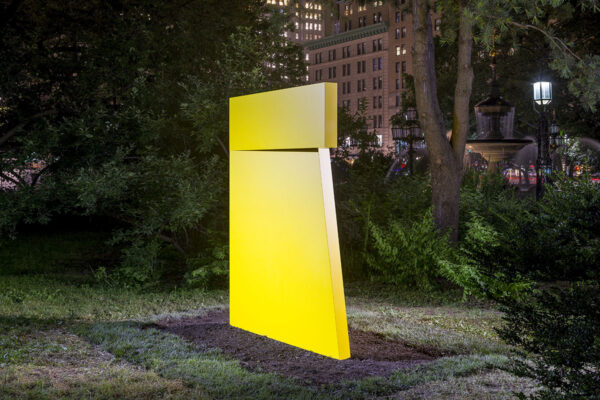 Herrera is based in New York, and her work includes vibrant, abstract geometric paintings, on which her Estructuras series is based. The aluminum structures in monochrome are bold, and characterized by strong lines and shapes, the dimension of which range between seven feet high to more than twelve feet wide.

“At a time when public art is more vital than ever, we are thrilled to partner with Buffalo Bayou Partnership to bring Carmen Herrera’s Estructuras Monumentales to Houston audiences,” says Public Art Fund Curator Daniel S. Palmer. “Herrera’s breathtaking sculptures will fit perfectly within this natural environment complemented by the geometric and lively skyline of Houston. This is the ideal setting to highlight Herrera, an eminent artist who is finally receiving well-deserved recognition.”

The Buffalo Bayou Partnership’s exhibition will run concurrently with an exhibition of Herrera’s works at the Museum of Fine Arts, Houston, beginning October 21. The museum exhibition runs through January 18, 2021. Carmen Herrera: Structuring Surfaces, will include more than 30 of Herrera’s works from the 1960s to the present, including paintings, drawings, prints, wall structures and objects.

Born in Cuba in 1915, Herrera moved to Paris after World War II, where she spent the early part of her career and where much of her practice became fully formed. Settling permanently in New York in the 1950s, although Herrera became a part of New York’s abstract art scene, her work was largely overlooked until Herrera was in her 80s. Staying true to the pure, geometric abstraction she developed in post-war Paris, in recent years, Herrera has been recognized as a leading voice in the abstract and minimalist movements. ‘Estructuras Monumentales’ celebrates Herrera’s long career and interest in three-dimensional form