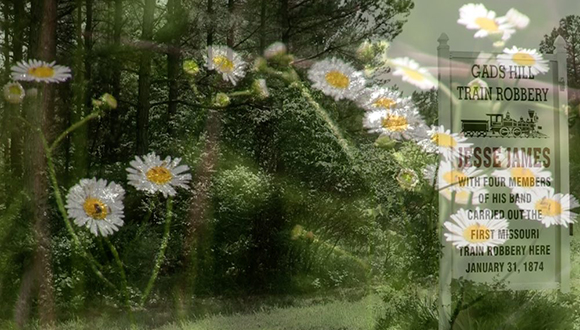 “In her most ambitious work to date, Copeland will debut her most recent work researching her ancestor — the notorious outlaw Jesse James. The exhibition includes a 22-channel video installation, framed solar plate etchings, as well as an original musical score composed by Dallin B. Peacock and an original audio guide featuring acclaimed Dallas actor Ike Duncan.

“Copeland’s fascination with Jesse James stems from childhood family lore — tales of her blood kinship to the notorious outlaw Jesse James. Her great-great-grandmother’s 2nd husband Billy James was Jesse and Frank James’ first cousin.
Over the past three summers, the artist traveled to the sites where Jesse James lived and outlawed, filming and leaving her DNA in the form of a lock of hair at each site. The performative journey/quest spanned 9 states and over 4000 miles.
The project addresses the cultural mythos of criminals, specifically how the icon Jesse James was/is presented and commodified in books, films, comics and historical sites, as well as the current and problematic fascination with DNA networks such as ancestryDNA.com.

“In the wake of the continued horrific gun violence and murders of black Americans by law enforcement, the work takes on a new context. Visitors to the gallery will view the videos through gun scopes, asking them to question and confront their own perceptions about guns and gun control.” -Colette Copeland

Five-Minute Tours: Signs of the Times at PDNB...

Five-Minute Tours: Back to the Future at Ro2...

Five-Minute Tours: Diane Durant at the College of...

Five-Minute Tours: Darcie Book at the Fort Worth...