Insult to Injury: The Loss of an Art Fair and the Potential Death of Galleries 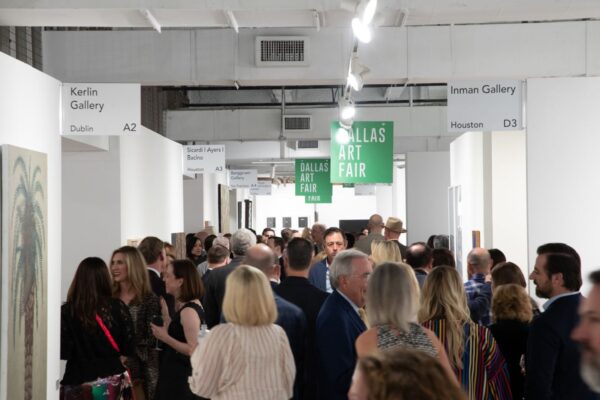 You may have seen this news here, or elsewhere: The Dallas Art Fair (DAF), cancelled due to Covid, will not reimburse galleries for their exhibitor fees. The fair’s organizers say they’ll transfer credit to future Dallas Art Fairs. It is nearly certain that some of these galleries will be closed by the time another Dallas Art Fair even happens.

Some Glasstire readers know that I’m a fan of commercial gallerists and dealers. Gallerists are, aside from the artists themselves, the primary risk-takers of the art world. And that role in the art world — of choosing to navigate so directly the inevitable and historically queasy intersection of art and money — attracts some of the craziest and weirdest pure champions of art I’ve ever encountered. I was a gallerist once, too, so there’s that. I count amongst my friends a number of Texas-based dealers whose stress levels I can attest to.

The work of a gallerist — shaped by the dissonance that happens in the headspace of truly loving art while contextualizing and selling it to interested parties — is in itself a kind of extended conflict. Some like the challenge, or at the very least handle it better than others (I did not handle it well), and some, after a great deal of work, manage to make a good living off of it. And we would all be much poorer, culturally, without art galleries and the dealers who run them. More on that in a minute.

It may be too soon or even unfair to speculate that the Dallas Art Fair’s refusal to reimburse galleries for their booth fees will be an economic death knell for any particular gallery. Before Covid, in “normal” times, I’d hazard that most galleries that can afford to do an art fair could weather the loss of a single $10,000, or even $30,000, exhibitor fee. But it’s not just a straight, single financial loss in this case, and these are not normal times, when a clever gallery could dream up a novel way to make up for one significant loss.

But the Dallas Art Fair’s inability to reimburse the galleries even a part of their expense is a triple whammy for the participating galleries, and it could be cataclysmic for some, most especially the smaller galleries.

The fair, twelve years old, has digs in a boutique-ish trade show space in the city’s Arts District, and while it has grown its increasingly international exhibitor list, one thing that distinguishes it from big fairs like Frieze and Basel is that its audience has remained largely homegrown. Its selling point is that it gives exhibitors access to Dallas’ wealth. It’s an unusual fair that’s not franchised or part of a franchise, and it plays like a bespoke and relaxed but deep-pocketed affair. Its relationship with the region’s galleries is patchy, and the ratio of regional to national and international galleries on show has been somewhat static for years now, hovering somewhere around a sixth of the fair’s exhibitors. But Texas galleries do participate — some every year, some sporadically, and some have been one and done. And smaller and emerging galleries come in from Los Angeles, New York, London. The promise of making connections with the region’s collectors and museums draws them in.

So, the first whammy for the galleries that were scheduled for this year’s Dallas Art Fair is one most fair goers would understand immediately at the news that a fair is cancelled: The gallery must absorb the potential loss of money it (projected) it would make by selling work at the physical fair itself, or make over time through new contacts made on the ground. Most all physical art fairs, post-March, have been cancelled this year, and for galleries that depend on fair sales to keep their operations going and to stay competitive, this automatic sales loss is painful. And by this time, in 2020 (Covid notwithstanding), most galleries that choose to participate in a particular art fair have done a lot of careful cost-benefit calculations before they ever send in a payment for a booth. The galleries that chose the Dallas Art Fair had to make those calculations based on previous experience, word of mouth, the fair’s reputation, and so on. It is never a light decision. And the proliferation of art fairs to choose from makes the decision to do one fair over another even more pointed.

The second whammy, in this case, is the other obvious one: the straight-up loss of the exhibitor cost. Other cancelled art fairs — and granted, they are bigger fairs, such as Art Basel and Frieze — have reimbursed galleries most if not all of their exhibitor fees in the wake of Covid cancellations. These fairs are banking on having a future relationship with these galleries as well as preserving the their own credibility. It’s also simply the right thing to do, in the sense that the only way a fair exists in the first place is that it secured the trust of the galleries that make it what it is.

At this point, we can imagine the plight of a small or emerging gallery that now has to factor in its loss of projected sales, and its loss of its booth fee. A double loss. For some, this wouldn’t be particularly survivable even in the best of times.

And the third whammy circles back into the reason the fair was cancelled in the first place: Covid-19, and all its attendant financial repercussions on the art economy. Revenue losses for galleries started immediately after the shutdowns began, and losses will continue to decimate plenty of galleries for, probably, years to come.

Nearly every industry has been rocked by the same forces. A post-Covid New York, or Houston, or Dallas, has or will lose many of its most distinctive restaurants, its mom-and-pop shops, its family-owned and esoteric and specialized and wonderfully practical or geeky businesses — all the stuff that gives a city its personality and makes it worth living in, all the stuff that’s not part of a corporate chain — as well as its non-profit art spaces, and its galleries.

I’d hazard that about half of the worthwhile discussions that take place in the art world take place in commercial spaces. These discussions may be sparked by the artwork itself that’s in a space, but just as often these spaces are a crucial spoke in the hub of how artists and art-interested people gather and share ideas and information. I’ve had far more involved and bracing conversations about art, its ramifications, and its future at gallery openings than I’ve had at museum openings.

But again, often, these conversations are sparked by the art you’re looking at in a gallery, because the art is new. It’s a new idea — one you may have never considered before. Museums access and show the same artists’ work, but most often well after the fact. In so many cases, the gallerist is the first and crucial champion of an artist’s work.

Granted, the horrible money circus that the art world has turned into over the last 20 years is partly driven by commercial spaces and the ethos of “grow or die,” a blighted kind of ethos most gallerists didn’t embrace or agree to when they first opened their doors. The insatiable cycle of art fairs has been a major player in this problem, though it would be daft to say that many galleries haven’t profited off this model; thus the cycle.

But I circle back here, and maintain that many of the best or most memorable shows I’ve seen over the last circus-y 20 years, including in this last year, have existed because a gallerist took a risk on an artist’s newest body of work and showed it in their own space (and not in an exhibitor booth). If we lose commercial galleries, we’ll have lost the prime drivers of an art community: exposure to new work and ideas, sources of payments for artists, and vital conversations about art.

When an art fair’s business model is such that it can’t reimburse a gallery following its cancellation, it is contributing to the death of these conversations. The Dallas Art Fair may not be rich, but it sells itself on its relationship to the region’s wealth.

I suspect that if the Dallas Art Fair returns at all, it will be a very different fair, and I worry that this severance of trust between the fair and its exhibitors, and the related financial hardship, will cause more damage to some galleries than the simple loss of a booth fee. And that would be a loss for us all.

Thanks Christina, I concur. I believe the old paradigm has died, and with it art fairs. It’ll be years before another venue can fill the vacuum.

Maybe I’m naive but how in the world can the fair legally keep the exhibitor’s money. And if they have found a way, what exhibitor would ever consider returning?!

My understanding is that some galleries had not already paid the exhibitor fee, or had paid only part. If that’s true, then they are coming out ahead of the galleries who timely paid in full, which is unfair. If the Art Fair is insolvent, my NON-lawyer guess (since I’m retired from the bar) is that some kind of bankruptcy case might help make sure that all legally available funds are corralled and that all the creditors are treated equally (un)fairly.

What’s unfair is that DAF is keeping funds and forcing exhibitors into two more editions in order to get their money back. Many of the galleries who survive will have to make a difficult decision in returning – invest more money (likely during the pandemic) to rejoin an embattled fair? DAF has always allowed exhibitors to pay out their fees. That some galleries didn’t lose everything is a blessing and good business on the galleries’ parts. The entire situation with the fair is unfair, if we’re being honest. This is a group that values their real estate investment more than the relationships built with exhibitors over the course of several years. If they return, it certainly won’t be much of a celebratory affair, just a handful of still struggling galleries being held hostage by DAF in order to try and minimize losses.

Christina, Thank you for this very clear assessment of the problem at hand. You are indeed an ardent champion of artists and of those who support them. This is a very sad situation.

Thank you Christina for this great article – I agree gallerists are unsung heroes and true art supporters. And because the protocol within these art shows is to return 100% of exhibitor fees, I am curious why the Dallas Art Fair refuses to follow protocol and only offer credits for next year’s event. It’s a beloved art fair and based on their reputation I expect them to show proof they did not receive ANY funding from the government, or that they in fact looked into filing bankruptcy but am asking for mercy from the galleries, or they are willing to set of a ZOOM Town Hall meeting to discuss finding a fair solution. To be “beloved” is also to be held accountable. I hope The Dallas Art Fair can do the right thing.