Of Origin and Longing: Mica Lilith Smith at LHUCA 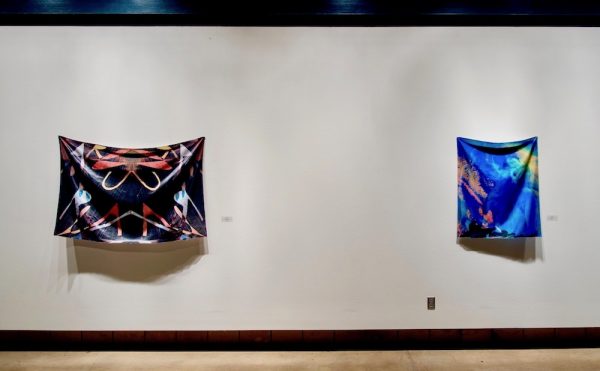 We came in through the studio gallery that day, rather than the main entrance, and the garage doors were open wide to let in the air and the visitors from the Juneteenth celebration in the plaza. Mica Lilith Smith’s works fluttered in the intermittent breeze permitted by the flung-open doors.

Smith has lived in Lubbock for the past year as a visiting professor of painting at Texas Tech, but she also has roots in photography and design. Smith’s practice is fundamentally interdisciplinary, spanning drawing, painting, photography, and video. The works in her show currently at LHUCA in Lubbock, Of Origin and Longing, are primarily digital collages printed on satin, created between 2019 and 2020. Hung to the wall like butterfly specimens by two mere pins, they float about an inch away from the wall and move freely as air currents pass them. 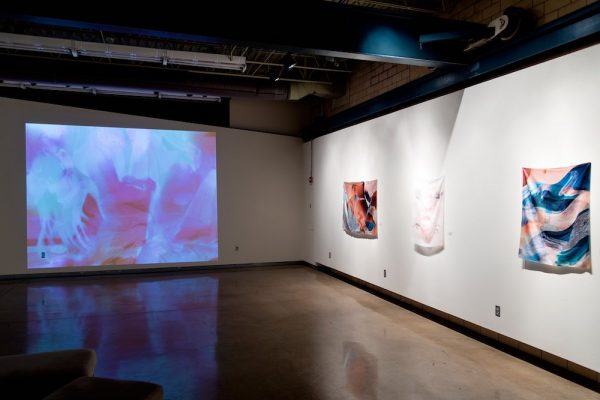 This movement brings attention to the works’ physicality, their presence in the gallery. In that way they are not disembodied images — they insist on their own embodiment. They are delicate but not fragile, bringing to mind the slogan by queer publisher GenderFail: “radical softness as a boundless form of resistance.” Extreme close-ups of skin and hair are cut, pasted, and remixed, forming words to untangle — “sore,” “weep,” “wave.” Even as they float freely in the breeze, the works repel the touch, instead sending out a kind of punk electricity generated by tension between their jagged, cut-up imagery and the smooth fabric surface.

They recall the abstract Photoshop collages of Kate Steciw that cross over into sculptural objects; echo the disorienting intimacy of flesh in Marilyn Minter paintings; remind us of the insouciant photomontages by Linder, with her interrupted female figures, scrambling their objectification with household objects; and they draw on a lineage that goes back to the godmother of the cut-up, Hannah Höch.

ARE U REAL, one of Smith’s works asks, with letters that are fragmented yet foundational, in a symmetrical composition like a Rorschach test asking the viewer: “What do you see here?” I came in closer for a look and only then did I notice the small crystals embroidered into the fabric, like earring studs. The effect is so subtle and restrained it is astonishing. As a trans woman, as Smith is, I can only imagine how loaded the question of realness would be, but at the same time the answer is so clear. This piece, pierced with shrewd sparkles and confidence, is realness embodied.

Smith states that she is “captivated by origin stories of trans womanhood,” and one of the most intriguing and deeply layered artworks in the show, titled Origin Girls, depicts a photograph of a sculptural group of three women with penises, overlaid with an abstract pattern of brilliant blue and pink. The women, arms linked, relax in confident contrapposto and sisterly affection. The image is Photoshopped, modifying a photograph of a sculpture of The Three Graces from 1831 by neoclassical sculptor James Pradier, which is in the Louvre. As a meme, it has floated around the internet as a Classical affirmation of transgender beauty. This kind of Classical imagery, just as it did in Pradier’s day, points to an ancient lineage, a pure historical continuum, but our contemporary understanding of ancient Greek and Roman statuary — as idealized white marble statues — is as contextless as the images that populate Tumblr feeds. Archetypes to project onto — exactly what Smith does here with the dazzling overlay of colors. It is a stunning simulacrum. 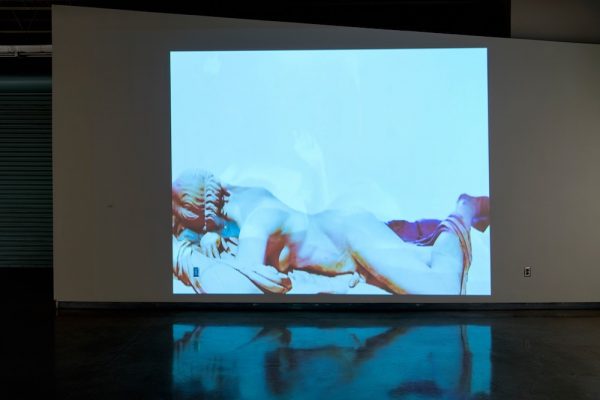 The show is anchored at one end of the gallery by two self-portraits in graphite, and at the other end by a video projection — facing off between the intimacy of drawing and the performativity of video. Notably, the video makes reference yet again to Classical sculpture, as Smith, lying supine, filmed in negative, fades in over an image of the Sleeping Hermaphroditus, an ancient Roman sculpture that’s also in the Louvre. While this nude figure, with breasts and penis, is a genuine artifact of antiquity, it, too, is a simulacrum — a marble copy of a now lost bronze original — of which there are many copies, both ancient and modern. 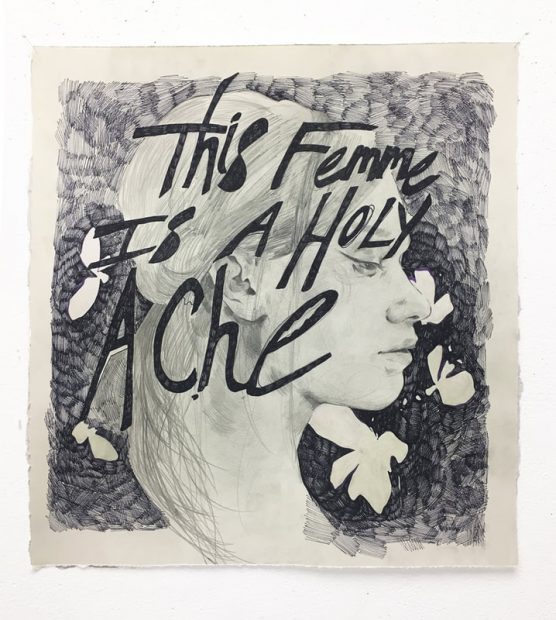 Mica Lilith Smith, “This Femme Is A Holy Ache” 2019. Graphite, acrylic and Ink on Stonehenge, 19″ x 19″ Image via artist’s website

Of Origin and Longing is a cohesive and intriguing body of work, both incredibly smart and sensual. Smith constantly plays between polar opposites: hard and soft, masculine and feminine, physical and virtual, gestural and mechanistic, real and simulated. The works on satin, while composed by digital means, resist their appropriation as images because of their sheer physicality. They waver, and therefore elide capture.

Through Aug. 1, 2020 at Louise Hopkins Underwood Center For the Arts (LHUCA), Lubbock.