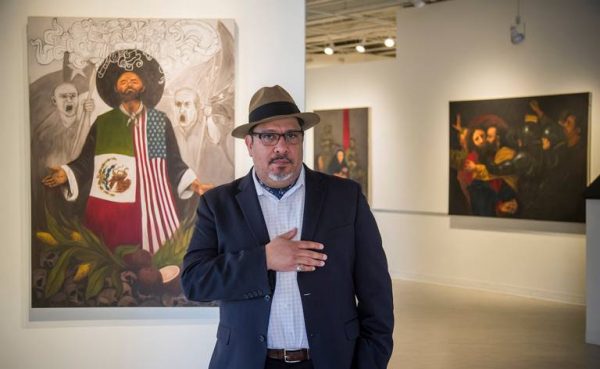 Last weekend, on my first road trip during the COVID-19 pandemic, I visited Fort Worth. While there, I stopped by the Modern Art Museum of Fort Worth as well as the Kimbell Art Museum. I wanted to see what it was like to visit those museums during the Coronavirus pandemic. I also took a moment to do a masked-up, socially-distanced studio visit with artist and Lead Preparator at the Kimbell, Jesse Sierra Hernandez. Hernandez is a long-time friend and we’ve visited each others’ studios over the years.

Three of four panels of Jesse Sierra Hernandez’s “This is America, But it Doesn’t Have to Be”

Hernandez recently begun the final panel of a 4’ x 12’ painting with the working title This is America, But it Doesn’t Have to Be. It’s part of a series of paintings Hernandez has created over the past decade, in between making his hallmark oversized female nudes. We had a moment to talk about the new work.

Christopher Blay: Jesse, this obviously speaks to what’s happening in the country right now, but was that your initial inspiration? What got you to this point?

Jesse Sierra Hernandez: I guess BC (before COVID) I started getting this idea. This stuff has been going on for years, but really it was the Charlottesville counter-protest documentary [that] had me like, damn. When you get tired of being treated a certain way and say, “Hey you know what? We’re tired of getting treated like this,” you get so much pushback. You get greeted with so much violence and so much hatred, just by saying, “I don’t like this.” Just by saying you want change, people freak the hell out, man! You have counter-protests with guns and confederate flags… . 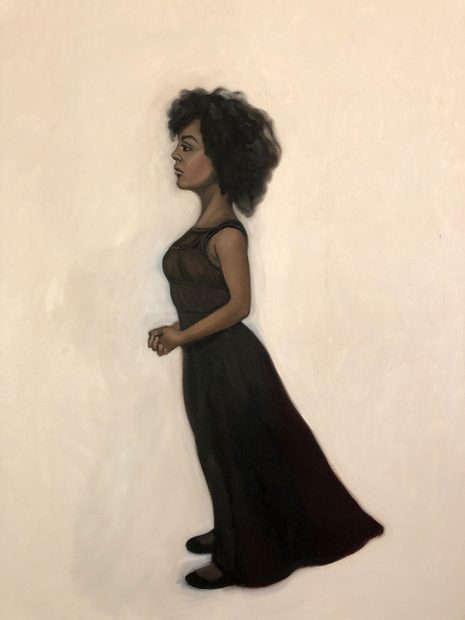 Jesse Sierra Hernandez, “This is America, But it Doesn’t Have to Be” -one of four panels

Christopher Blay: Are these based on any recognizable persons? I know that the Charlottesville protesters are based on an actual event, but did you paint any specific public figure?

JSH: Every person in the painting is based on actual people, using photographs from protests and counter-protests, so they exist. I didn’t make anyone up. These are all real people, although I may have taken a few liberties with faces of politicians and police.

Christopher Blay: So how long have you been working on this?

JSH: I started painting the canvases about a month ago. 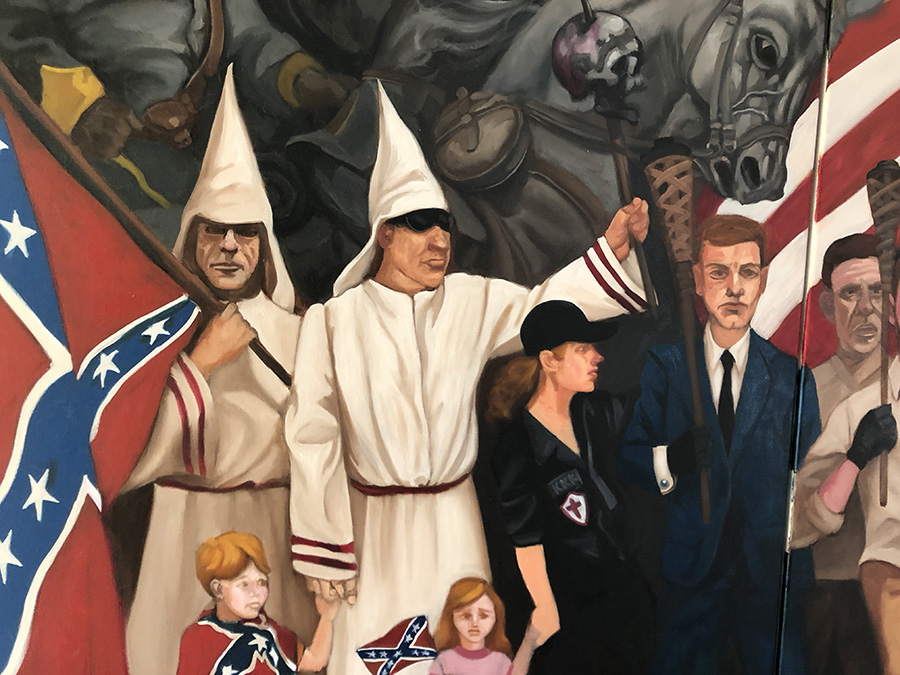 Panel detail of Jesse Sierra Hernandez’s “This is America, But it Doesn’t Have to Be” (working title)

Christopher Blay: Are there only four panels?

JSH: You know, I’ve been thinking about that! I could easily add more panels, on both ends. My initial thought was having another group [to the right of the existing panels] kinda face to face, but when I came across the [reenactment] image of Ieshia Evans standing alone during the Baton Rouge protest [after the killing of Alton Sterling in June of 2016], I thought I would just add a panel with one figure standing against all this hatred.

And I thought, we can gather in groups of hundreds and protest, but each individual has to stand up for themselves and realize, “Hey, you know, I have to do my part.” 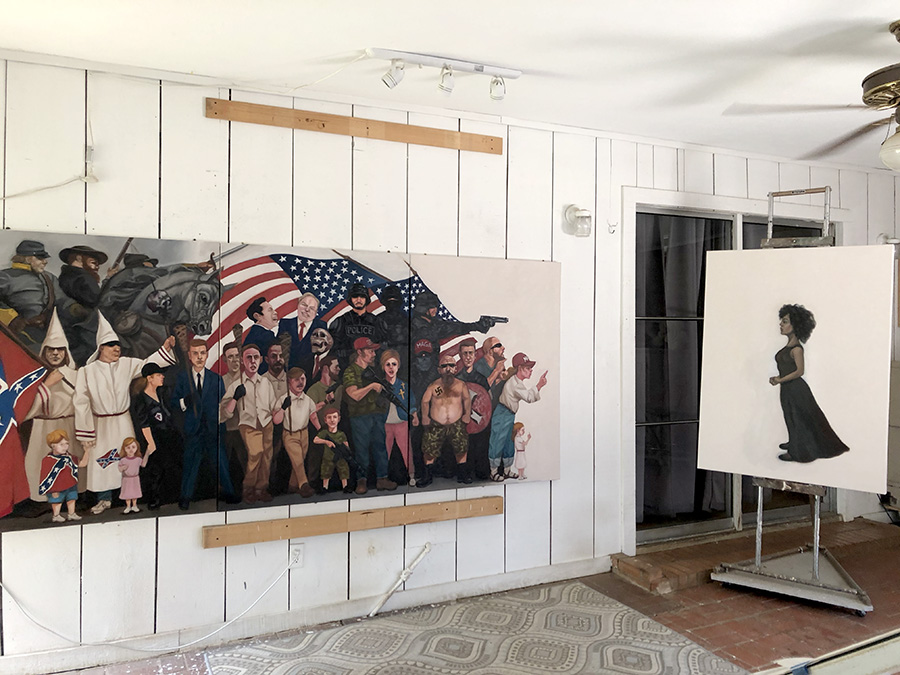 Christopher Blay: It’s really powerful to look at, Jesse. Are the panels going to make a single piece?

JSH: I ended up painting each one individually and assembled them to paint where they overlap — but yes, it is one piece. I had to get the final figure just right. It wasn’t as labor-intensive because it’s just one figure, but I had to get the stance perfect. All the figures are now in, I just have to finish some detail and clean up and add to the background. The horse I painted gray, to mimic monument statues, and the riders are based on Civil War reenactors. I wanted them grayish, like ghosts. Isn’t what they say they think they are — the ghosts of the Confederate soldiers?

Christopher Blay: I also like how the stripes of the flags lead into the rest of the painting. Is there any symbolism in the flags or elsewhere in the painting?

JSH: It kind of reminds me of the painting of Washington crossing the Delaware. I wanted the flags going left to right, because that’s how we usually read. The [KKK] figure holding a spiked skull was actually holding a flag in the photo [that it’s based on] but I didn’t want the flag covering anything. I also wanted one of the politicians to have a skull head, and each panel to have a skull. There is also a rythym of threes: three KKK figures, three Confederate figures, three politicians, three cops… . 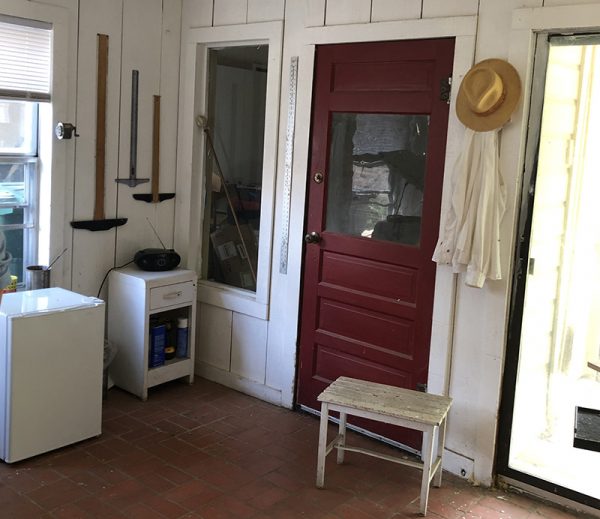 Christopher Blay: Well, Jesse, thanks for letting me come see a work in progress! I’m glad I was in town.

JSH: No problem, man. It takes all of us, but as individuals we need to stand up, open our eyes, be brave and realize this is not the America we should be living in.

Jesse Sierra Hernandez is an accomplished Fort Worth artist whose work ranges from small works on paper to large-scale oil paintings, representing a variety of themes.  Hernandez has struggled with a stutter ever since he was a child and began drawing and painting to serve as a voice that didn’t require speaking. This voice grew louder as he began oil painting in 1992, and started to pursue themes of the human form, religion, and social observations within a museum setting. Hernandez is Inspired by his personal convictions, plus admiration for Baroque artists. Hernandez was born and raised in Fort Worth. His work has been shown in over a dozen solo and group exhibitions, including Gallery 414 Inside The Lines (2015). He initially received his education in commercial art and studied under illustrator Don Punchatz from 1991 to 1995. In additional to painting, Hernandez is a preparator for the Kimbell Art Museum, a position he has held since 2001. Prior to that, he served as curator and art director for Fort Worth’s Studio 4 gallery and 7th Street Gallery.

Take a Closer Look at Delacroix With Someone...