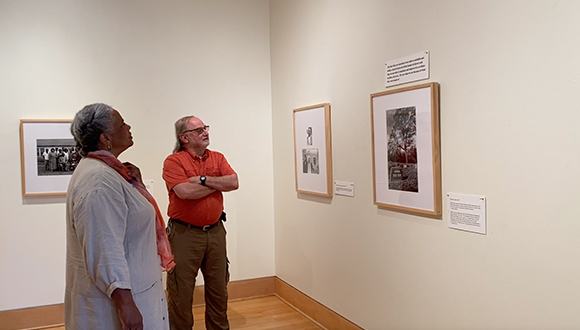 The photographs, which have been featured in an exhibition that’s been traveling across Texas for the past three years, are the focus of Orton’s book, “The Upshaws of County Line; An American Family,” which is a documentation of the County Line community’s history through photographs and oral histories of the families who lived there. Orton became acquainted with the Upshaw family, which had lived for decades in the northwest Nacogdoches County community of County Line, in the late 1980s and began taking photographs for this project, which evolved into a book that was published by the University of North Texas Press in 2014 after 25 years of preparation.

John Handley, director of art galleries at SFA, and Chris Talbot, director of the SFA School of Art, began discussing the possibility of turning Orton’s photo project into a traveling exhibition in 2016. After a number of art venues, including universities, expressed interest, the show was printed, framed and prepared for touring. It has been seen in venues at Southwestern University, the Institute of Texan Cultures, Angelina College, Denton UNT Gallery on the Square and the Lost Pines Art Center in Bastrop, among others. It last closed in Midland at Midland College at the end of February this year.”

Five-Minute Tours: Works from the Collection of William...