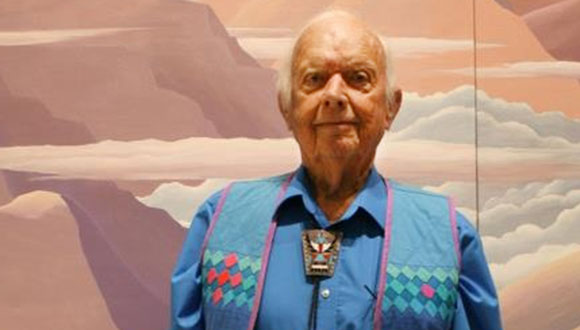 Don Anderson — businessman, artist, patron of the arts and founder of the Anderson Museum of Contemporary Art (AMoCA) and Roswell Artist-in-Residence (RAiR) Program — died Sunday, June 7, 2020, at the age of 101.

A self-taught artist, Don Anderson was born in Chicago in 1919, and later attended Purdue University to study mechanical engineering, and received his B.A. in 1942. Anderson then served as Chief Engineering Officer in the Navy during WWII, from 1942-1956. In 1963 he founded the Anderson Oil Company in Roswell, NM. Of Anderson, the late artist and former RAiR fellow Luis Jiménez said, “He’s this artist who has this wonderful hobby of making money in the oil business.”

In 1967, in partnership with the Roswell Museum and Art Center, Anderson began to invite artists and give them grants to create in what was at the time a nondescript arts scene. What this initiative became, the Roswell Artist-in-Residence program, has grown into an internationally acclaimed residency. As it has evolved, artists have been able to house their families, and if their spouse is an artist as well, they get their own studio. Known for giving the “gift of time,” the residency encourages artists to spend a full year at the residency, with no teaching, planned exhibitions, workshops, or other demands. Stipends, studios, and housing is provided in the Howard Cook Road Facility in the high plains surrounding Roswell, New Mexico. 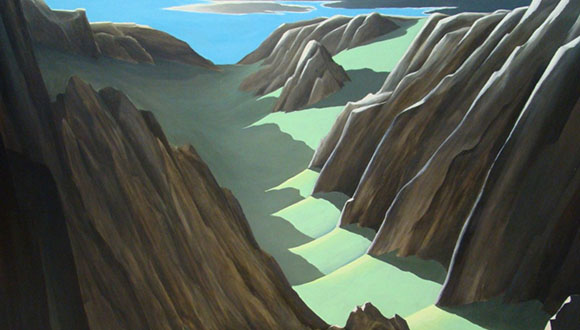 AMoCA purchases at least one artwork from each fellow to add to its extensive collection. The museum, though officially opened in 1994, began in 1947 when Anderson purchased a 5,000 square-foot metal building to use as a truck maintenance area for Anderson Oil Company. In time, he began to use the lofty space to hang his large geometric landscape paintings, as well as other artists’ works he collected through the RAiR program. In 1992, the building at 409 E. College Boulevard had an official exhibition of works under the moniker “Gallery 409.” Now, the 22,000 square feet building hosts more than 500 artworks in 12 exhibition spaces.

More about Don Anderson’s legacy, the Anderson Museum of Contemporary Art, and the Roswell Artist-in-Residency Program:

“Dedicated to the work produced by artists who have participated in the Roswell Artist-in-Residence Program, AMoCA has become a source of knowledge and inspiration about contemporary visual art for the Roswell region, New Mexico and the Nation.

“This unique collection of photographs, paintings, prints, drawings and sculpture provides a snapshot of the evolving issues in art over the last 45 years (since the 1967 inception of the Roswell Artist-in-Residence Program). Works range from figurative to non-objective and showcase the diversity of the Roswell Artist-in-Residence Program. Few other museums provide a similar focus on contemporary visual art with such an eclectic range of form and content.

“The Roswell Artist-in-Residence Program’s interest is in strengthening the vitality of the visual art in New Mexico and has been a catalyst in broadening community understanding of contemporary art for over fifty years.