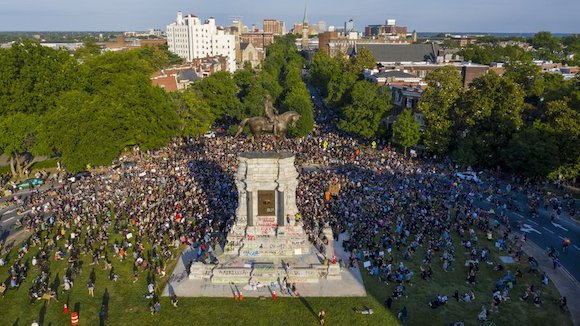 As mass protests over police violence and the killing of George Floyd continue across the United States, Confederate monuments are being dismantled and moved.

As reported in Artforum, statues in Birmingham, Alabama, and Philadelphia, Pennsylvania have been recently removed by order of city mayors, and statues in Richmond, Virginia and Indianapolis, Indiana are scheduled to be removed via orders by city or state leaders.

Via Artforum: “Many controversial public monuments served as rallying points for supporters of the Black Lives Matter movement and people demonstrating against police brutality, and were defaced or toppled in the ongoing nationwide demonstrations following Floyd’s death on May 25.”

On Monday, the mayor of Birmingham, Randall Woodfin, ordered the removal of the Confederate Soldiers & Sailors Monument in Linn Park. He “had the 115-year-old statue carted away by crane despite not having the authority to do so—the move was in violation of the Alabama Monuments Preservation Act, a law passed in 2017 which prohibits the relocation, removal, or alteration of monuments. Woodfin was not deterred by the potential repercussions of his decision, telling AL.com that he would rather pay a state fine than have more civil unrest. Woodfin told NBC that he has since received death threats.”

A statue of former mayor and police commissioner Frank Rizzo, known for brutal policing, was removed from Philadelphia’s Thomas Paine Plaza earlier this week. It has been relocated to a storage area for the Department of Public Property. The city’s current mayor Jim Kenney called the statue a “deplorable monument to racism, bigotry, and police brutality.”

The governor of Virginia, Ralph Northam, has announced “plans to dethrone the bronze effigy of Confederate General Robert E. Lee astride his horse, which has overlooked Richmond from a large pedestal on Monument Avenue since 1890.” And the mayor if Indianapolis, Joe Hogsett, has announced that Indianapolis “will dismantle a thirty-five-foot tall monument commemorating 1,616 Confederate soldiers who died as prisoners of war at Camp Morton.”

States Hogsett: “Our streets are filled with voices of anger and anguish, testament to centuries of racism directed at black Americans. We must name these instances of discrimination and never forget our past—but we should not honor them. Whatever original purpose this grave marker might once have had, for far too long it has served as nothing more than a painful reminder of our state’s horrific embrace of the Ku Klux Klan a century ago.”

The debate over what to do with Confederate and racist symbols was ignited anew in 2015, after nine people were murdered at a black church in Charleston, and in 2017, following a white nationalist rally in Charlottesville, Virginia.

Via Artforum: “The Southern Poverty Law Center estimates that at least 138 public markers memorializing the Confederacy have been removed since 2015. The center has created a map of existing Confederate monuments, and of those that have been taken down, which can be found here.”

For more on this, please go here and here.