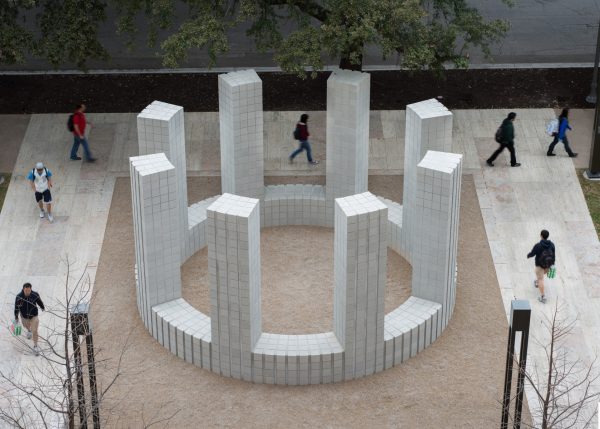 The below video is for UT Landmarks, courtesy of GalleryLOG.

About Circle with Towers:

“Sol LeWitt, a pioneer of minimal and conceptual art, exhibited five structures in his first solo exhibition in 1965. With matter-of-fact titles like Floor Structure and Wall Structure, the rectangular black wood forms signaled his lifelong commitment to an elemental geometric vocabulary, as well as a sensitive consideration for the architectural context of his work. The wall is never merely a backdrop in LeWitt’s art; it assumes primary importance as a critical component in many of his three-dimensional structures and as the surface upon which his wall drawings are painted or drawn.

Circle with Towers is, in effect, a low circular wall capped at regular intervals by eight rectangular towers made of pale gray concrete blocks. The outdoor structure possesses a discernable logic and rhythm: the concrete towers are four blocks wide while the low walls between them are eight blocks wide—a perfect 1:2 ratio. The concrete block structures are laid by hand, one block at a time by local masons. Like many of LeWitt’s works, Circle with Towers demonstrates the artist’s generosity in welcoming others to interpret his work, including the artists and craftspeople who realize his artistic visions.

LeWitt introduced concrete block into his work in the 1980s. A humble material, it appealed to his interest in making art that privileged concepts over materials or surfaces. He also liked that the rectangular blocks could be stacked on end so that the cube, or square, becomes a repeating motif. While LeWitt’s work evolved in significant ways over the course of his career, the cube appears at each phase and in every medium, from sculpture to photography. The square and cube were both crucial elements in LeWitt’s vocabulary, both as elemental units and in reference to grids made by other artists throughout the twentieth century.”

“During the 1980s, LeWitt produced many jewel-toned, ink-wash wall drawings like Wall Drawing # 520, dramatically expanding his repertoire from the pencil versions that predominated the first decade of his career. In this work—one of the few that the artist conceived for three walls—cubes float across the surface in rich, variegated colors. The palette and slight depth of the geometric figures attest to the artist’s interest in Italian Renaissance frescoes, one that was spurred by the artist’s move to Spoleto, Italy, in 1980.

While these works depart from the more muted palette and systematic logic of LeWitt’s early pencil wall drawings, they also reflect his continued interest in using the cube as a basic geometric element. Equally significant are the the tonal variations achieved in LeWitt’s ink wash wall drawings, which result from layering only primary colors and gray. While the spirit of Wall Drawing # 520 is one of modesty, simplicity, and restraint, the visual results are lush.”

Five-Minute Tours: Signs of the Times at PDNB...