Art Dirt: The Intersection of Art and Conspiracy Theories 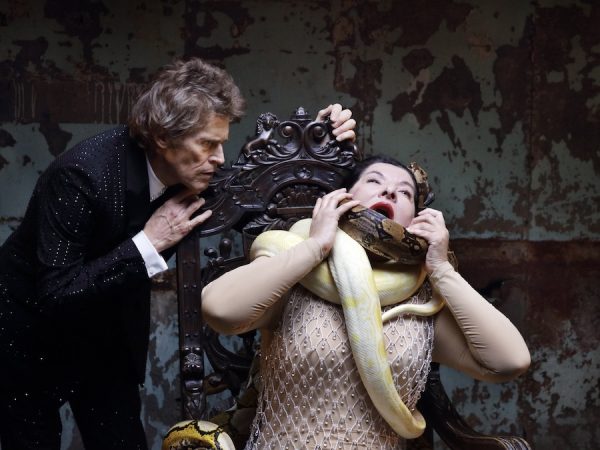 Brandon Zech and Christina Rees talk about Marina Abramović, the Kennedy assassination, and why conspiracy theories and art tend not to mix.

“People in the art world are kind of Teflon about this. There’s a lot of skepticism. It just doesn’t tend to circulate in the industry that we work in. So when it happens it’s really strange.”

To play the podcast, click on the orange play button below. You can also listen to it here. You can also find Glasstire on Apple Podcasts.

If you like Glasstire and would like to support our work, please consider donating. As a nonprofit, all of the money we receive goes back into our coverage of Texas art. You can make a one-time donation or become a sustaining, monthly donor here.

Some Believe Marina Abramović Is the Satanic Ringleader of a Global Political Conspiracy. That’s Ludicrous. But Here’s What They Get Right
Marina Abramovic Just Wants Conspiracy Theorists to Let Her Be
Stranger than Fiction: Art and Conspiracy at the Met Breuer
How Conspiracy Theories Shape Art
How a long-lost Leonardo da Vinci painting got dragged into a Trump-Russia conspiracy theory
Has the Salvator Mundi Really Gone Missing? Unpacking the Latest Conspiracy Theory
A Visit to the CIA’s “Secret” Abstract Art Collection
Handy With a Brush And Perhaps a Blade; Book Says a Painter Was Jack the Ripper
Performance Art Works Both Ways
Cattelan’s Crapper Caper Chronicle Continues!

Art Dirt: Is Virtual Reality the Future of...

Art Dirt: How to Have a Successful Studio...

Art Dirt: What Can Galleries Do For Artists...

Art Dirt: The Best Art Exhibitions of the...

Art Dirt: How was this Year’s Dallas Art...

The CIA story is more complicated than most knee-jerk art world types believe. What happened was that the State Department bought a bunch of contemporary American art (not on the bleeding edge, but still more modern than the average American typically saw) and sent it out on tour around the world in 1946, particularly to Eastern Europe and Latin America. The reaction to the show (which was displayed at the Met) was very negative in the USA, especially from the Fox News of the day, the Hearst papers. They ginned up outrage that your tax dollars would be spent on this garbage. Harry Truman saw it and on viewing a painting by Yasuo Kuniyoshi, “Circus Girl”, commented “If that’s art, then I’m a Hottentot.” The State Department was forced to sell this collection, even though it had had really successful exhibits in Prague and Havana. That’s when the CIA stepped in. They wanted to support art like this to demonstrate what art could be in a free country versus the heroic tractors of Socialist Realism, which remained the official art style of the Soviet Union. They worked with MOMA on the visual art side of things, and as a consequence, the work they promoted was much better than that collection that a mid-level State Department bureaucrat had assembled. But the art world theory puts the cart before the horse–making the CIA somehow responsible for abstract expressionism. Of all the things the CIA has done over the years, supporting American art exhibits across the world strikes me as pretty benign.

But you guys missed an earlier satanic art conspiracy, this one involving a Texas artist. I think we all know the story of how great Texas sculptor Luis Jimenez died when part of his huge sculpture, “Blue Mustang”, fell on him in his studio and severed an artery. The sculpture was completed by studio assistants and installed at the Denver International Airport., where it acquired the nickname “Blucifer” for it’s blue skin and glowing red eyes.

For a bunch of reasons, the Denver International Airport has been the subject of a variety of bananas conspiracy theories since its construction, and Blucifer is the Satanic icing on the conspiracy cake.

Blucifer on the Onion!

As an artist who has painted about the JFK assassination for over a decade, I think it is much deeper than one who has not studied it can even begin to understand. That being said, my work is about a journey for truth…for myself. I paint about a real and proven conspiracy, not a theory. And yes, sometimes it is like oil and water to viewers. Nevertheless, I paint what I must to be authentic and true to myself. Some love it, some don’t get it and some hate it. The same with all art in my opinion.

Mark Lombardi’s work would fit well into this conversation.

Artists sometimes anticipate the future in ways that can seem spooky.  They seem to draw their inspiration from another dimension, and may openly engage the unconscious, perhaps including a collective unconscious.  Works often explore that which the dominant culture ignores: the oppressed and the repressed.  While the 1% may be creative destroyers (or just looters), artists are disruptive creators; their work questions the “obvious” and threatens status quos.  They tempt us with veiled knowledge, infect us with our unremembered dreams.  Their power is at once disclaimed, impossible to prove, and undeniable.  Instinctively, authoritarians distrust and tyrants fear them, for artists continually insist on bringing into view that which tyrants wish we’d all forget: their victims, and “impractical” alternative futures.

And like all good messengers/thieves from the underworld, artists are blamed for their message; accused of authoritarians’ own dark dealings; for their trouble, chained to rocks where their livers are devoured – or at least, sentenced to keep pushing rocks uphill.

In a 2008 paper, Cass R. Sunstein – whom Pres. Obama later appointed as head of the “inquiry” into mass NSA surveillance – proposed that the U.S. government should “cognitively infiltrate” conspiracy theorist groups by joining chat rooms, social networks, and other groups to try to covertly discredit them – i.e., an actual conspiracy by the government to discredit “conspiracy theories” – and as you point out, there are many other proven examples of actual conspiracies by the government and other PTB – false flag operations, assassinations, infiltrations of progressive groups and of the media, etc.  Perhaps the only thing more fun than detecting a conspiracy is engaging in one.

Conspiracy theories are often right at least insofar as they evince an intuition that important aspects of the whole story are being omitted from dominant narratives.  Social scientist Kit Ying Lye has suggested, “[i]t becomes harder to piece the fragments together to create meaning when the State enforces censorship and prevents communication.  The translation of the traumatic event into an aestheticized representation actually thrives on the missing info and becomes a testimony that tries to compensate for the absence of this critical event in history.”

I think the draw of conspiracy theories is two-fold. For one, people latch onto the special feeling of having exclusive insight into power structures that “normal” people don’t have. This is particularly appealing to the uneducated who have felt alienated from the discourse happening among intellectuals because they can finally say, “Aha! Who is so smart now?” The allure of having access to a secret knowledge has manifested itself in various spiritual practices throughout the ages and has taken on a new form as a kind of political gnosticism. It’s easy for conspiracy theorists to justify digging deeper because they want to use their “knowledge” as a way of subverting elite control of the masses.

Secondly, I believe there is a link with mental health issues and believers of conspiracy theories. Drawing connections between disparate things and seeing signs in the banal is a common trait in those suffering with mental health problems such as paranoia, extreme anxiety, and psychosis. Even paranoia stemming from betrayal trauma causing a person not to be able to trust what is right in front of them combined with a mistrust of mainstream media and the belief that everyone has an agenda can lead to fertile ground for a conspiracy theory to take root. There is an intuition that something isn’t right and conspiracy theories fill the need to find something that validates the instinctual, gut feeling that people in high places are in cahoots, which they often are, even if not in the ways conspiracy theorists imagine.