by Barbara Purcell May 2, 2020
FacebookTwitterEmail 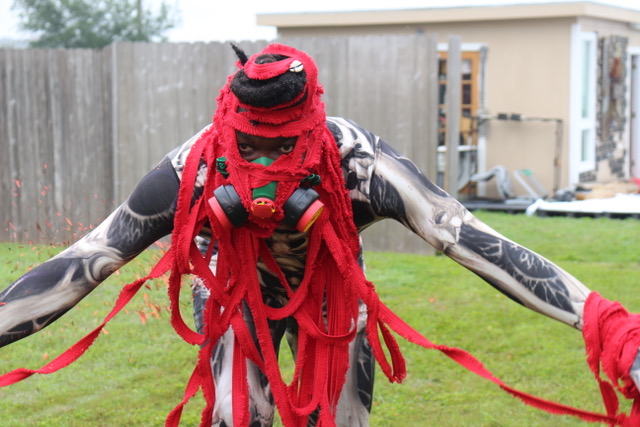 Still from “Aabo” (Shield), made for Fusebox 2020. Courtesy of the artist.

Nigerian artist Olaniyi Rasheed Akindiya would like to clarify that he lives in Pflugerville, Texas — not Pflugerville, Germany — a question once thrown his way by a curious collector at an art fair in Miami. Akindiya, who goes by the name Akirash, has been based in Austin since 2012, knitting himself into the local art scene while maintaining impressively far-flung ties. (He keeps a studio in Lagos.) The 47-year-old interdisciplinary artist has lived and worked in various countries throughout Africa, various places in America, and has shown in galleries and festivals as far away as the Australian Outback. 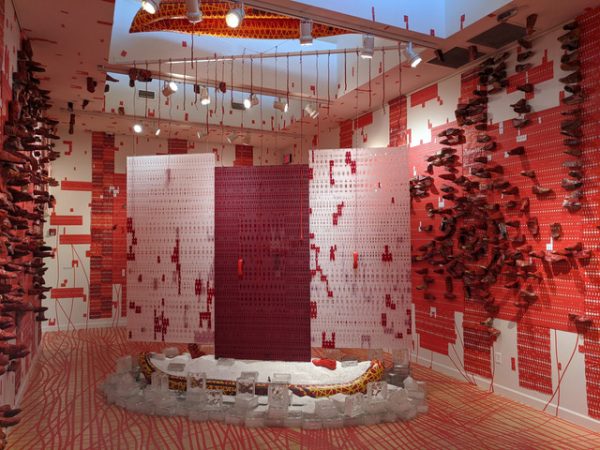 Installation view of “Majele” (Venomous) at the George Washington Carver Museum in Austin. Image courtesy of the artist.

We recently spoke on the phone about his current exhibition Majele (Venomous) at Austin’s George Washington Carver Museum, which runs until June 27 (though it’s not clear when the museum will reopen). The installation is in response to the forced separation of families at the Mexico-United States border in recent years: half-formed shoes cover the gallery walls, dead phones dangle from cords, and two rafts mirror each other in solitude, separated by a central divide. Majele tells a story of crossing borders only to climb bigger walls.

Akirash was scheduled to perform a related piece at this year’s Fusebox Festival, and ended up presenting an 8-minute video instead to fit the program’s pandemic-pivot virtual edition. Aabo (Shield) opens with an ear-piercing call to prayer as a gas-masked personification of death roves across a suburban lawn, shouting “Allahu Akbar” and “Hallelujah.” Akirash does his best to freak out the neighbors before peeling off his skeleton spandex and slipping into clear white garb. He enters a small plastic tent and stands prayerfully for a moment before taking a seat and cracking open his laptop. Even in a global pandemic, emails must be answered.

Barbara Purcell: What does Akirash mean?

Akirash: ‘Unique One.’ That’s what I was told when I went to Tokyo in 2002 for a residency; an old Japanese man said that that my name was actually Asian. But I’d been using it already since 1999! Akirash is based on my last name and my middle name. I come from a culture that has very long names — your grandparents, your uncles, your aunties — everybody gives you a name when you’re born.

A: When I was living in Accra, Ghana, I met an Italian ambassador’s wife who was connected to NYU. She wanted to create an annex and bring U.S. students to the university in Accra. I was selected to be one of the artists in the program, and this is how I started to connect more with the U.S. I met a lot of artists during this time as well as collectors and curators. I moved to the U.S. in 2011 and came to Austin in 2012. I was invited by UT and at the time, it was much better-priced than New York or Chicago. But Austin changed from what I first knew it to be; housing got very expensive and then too much traffic. We needed space for our young children to run around, so we chose Pflugerville, which has more reasonable housing and luckily pretty diverse culture.

BP: Does Austin have anything in common with where you’re originally from in Nigeria?

A: I grew up a two hours’ drive from Lagos, which was the capital at the time. So when I look at Austin compared to Lagos, they’re both capital cities where people come to work and do business. Abuja is now the Nigerian capital; it’s very big and very bold. When I first moved to Austin, it felt like a club: no matter how good you were as an artist, it was all about who you knew. But that has changed — now Austin is much more about the artwork.

BP: Do you consider yourself an Austin artist?

A: I could be an artist in any corner of the world. It doesn’t matter where you are living. It’s more about your focus and energy, how you create. There are more opportunities for artists in Austin now, more grants to apply to and more programs. The city continues to move the arts forward. When I go out to openings Austin, I want to feel goosebumps — the work has to push me, otherwise I’d rather be home reading to my children. I still have my studios in Lagos.

And London, Berlin, Paris — they’ve already been built. Austin won’t become Paris in the future, and that’s fine. An artist doesn’t need 1,000 different chances; they need just one chance. And you never know which one of your works will give you that opportunity, which is why I like doing installations: combining two or three things together, you have a better chance to reach more people.

BP: Your first degree is in biochemistry. How did you move into fine arts?

A: Each generation wants their children to grow beyond them. Where I come from, no parent wants their child to be an artist. My parents only wanted me to study and be a doctor, lawyer, whatever. But I had a passion for science early on. When I was 5 years old, I dissected a lizard under my mother’s bed and left it there by accident; it became very smelly and I got caught. My mom and dad started sending me to my uncle on holidays — he worked at Lagos University Hospital. The whole extended family supported me.

I got a good job with my biochemistry degree, but I became a rebel. I visited an art school one Saturday, and stayed until evening; I couldn’t leave. I had never seen live drawing before. I moved from painting to sculpture to textiles, through all the departments. I drove home and thought about it all day Sunday. I called in sick and went back to that school on Monday — I didn’t tell anyone. Then I finally announced to my family I wanted to go back to school for art; I didn’t want to be a pharmacist anymore. My family was upset with me. I didn’t talk to my dad for two years. But I was very sure of my decision. And I proved to them that being an artist is as good as being a doctor: you can have the same success, same rewards. 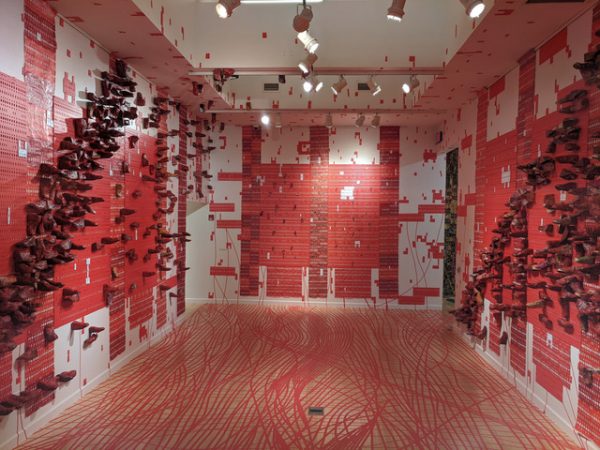 Installation view of “Majele” (Venomous) at the George Washington Carver Museum in Austin. Image courtesy of the artist.

BP: I read Majele is in response to the separation and detention of families at the U.S-Mexico border, but I’m curious about the rafts, particularly the one surrounded by red waves on the galley floor.

A: Majele is actually 20 years in the making. I first started researching immigration in 1999. I was working in Senegal, in a studio near the harbor in Dakar, and in the evenings I would spend time with the ship workers; we’d relax and listen to music. I heard stories of men who wished to go abroad — to Europe, to America — and would just disappear with those ships.

I learned of one leaving for Marseille, France; it was being loaded with salt. I wanted to see what it would be like, so I snuck on with the others — two from Senegal, one from Togo, three from Libya, another from Ghana, and myself — we hid ourselves in bags of salt. It was a long voyage, over three months, and the ship stopped in two other countries; we never knew if it was day or night, just hiding and losing our body water in the salt. Everyone died except for one other and myself.

I pretended to be deaf, dumb, and blind with French immigration officials; all I could do was write. They held me for eight months. I could have stayed to become a citizen, but I returned home. My research was complete. Then in 2014, I was on a road trip in Ghana and traveled the desert between Niger and Liberia. I was doing a story about the men who had taken this road in the hope of reaching Europe, but were never heard from again. I saw dead bodies in the desert; if you get out onto the sand, it can boil you in three minutes. So the red lines on the gallery floor in Majele symbolize the waves of the desert sand — not the waves ocean. More recently I was at an art residency in Santa Fe, and the issue at the U.S. border was heating up. I went to El Paso and cast the feet of 632 family members trying to get through. But I would cast just half their foot: half a human — half in Mexico, and half in the U.S. 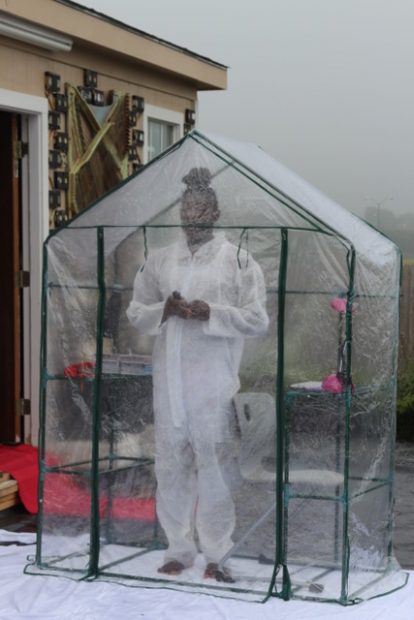 “Aabo” (Shield). Courtesy of the artist.

BP: Tell me about your video Aabo (Shield) for the Fusebox Festival’s virtual edition.

A: I was a Unicef ambassador for Ebola. I chose to wear that white clothing because Muslims wear that color as well. They come home and remove their clothes the way we all do now do. I am reciting Arabic in the video, but also erratic Greek and Hebrew. And “Praise the Lord” as well. I chose languages which represent all three Abrahamic faiths. Because right now, everyone must line up the same way to worship; the virus has created equality for all.

BP: Is the scientist in you surprised by this global pandemic?

A: I am not surprised. We can’t see this thing and yet it is controlling us. It’s all over the world, it’s already with you. We don’t know when there will be a cure or a breakthrough, so education is the best way to protect yourself right now. The virus doesn’t have respect for anybody. It doesn’t care if you are homeless or rich or Christian or Muslim. We are a family, we are a community. This is not just about quarantining right now: we are always living in a cage.

The interview has been shortened and edited for clarity. For more information, please visit www.artwithakirash.com.