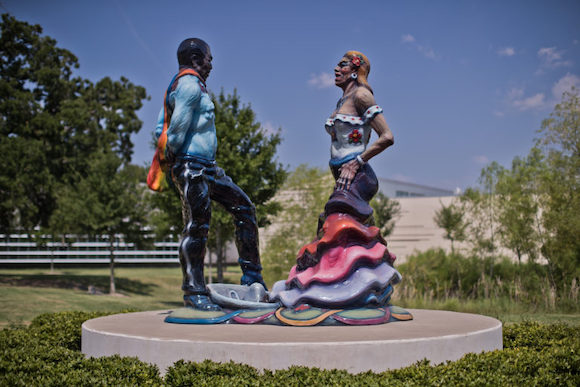 See below the video for more details on the works featured. All information is provided by Public Art UHS.

Gael Stack explores language, memory, and the limits and curious natures of both. By using a deep color as a ground, such as the cobalt blue in Untitled (2008), she references infinite space or possibly blueprints of things. The notations on the left side of the painting are renderings of a fragmentary text she discovered written (and overwritten) by a young woman suffering from an obsessive-compulsive disorder. Here, as in other works from the series, Stack layers texts and images to create a visual language exploring the complexities of communication and non-linear memory. “Art is like poetry,” she has said. “You want to give the viewer something to do…you have implication.” Yet works such as Untitled render the process undecipherable. Nevertheless, Stacks’ poignant scrawls convey the urgency and agency of the written language.

A pivotal figure in the early Houston art scene, James Surls is known for sculptures that blend the language of modernism and folk art. He grew up on a farm in East Texas, where he learned to work with natural materials, like his favorite medium, wood, and use many of the tools he has folded into his art production over the years. Surls has said that he wants his works to exist on multiple levels, complex, challenging, and intriguing to the viewer. For example, Flower Woman (1977) and its companion piece Flower Man represents the artist and his wife. But despite being drawn from personal experiences, works such as these transcend any singular personal representation, giving way to more universal feelings such as mystery and fantasy.

Address: Corner of Wheeler and Cullen

The son of a commercial sign maker in El Paso, Luis Jiménez was inspired by a wide range of cultures, but his Mexican American heritage was prominent throughout his work. The monumental Fiesta Jarabe (Fiesta Dancers) (1991-93) epitomizes this interest along with a parallel concern with folding in commercial techniques and materials such as fiberglass. As one of the preeminent Chicano artists of his generation, Jiménez was equally known for his pioneering artwork and for his social advocacy. On public art he remarked that it served to counterbalance a “closed-in” art system in the United States. Of this institutionalized culture, he stated: “People should not have to own [art] to appreciate it. Art should be accessible to [all] people.” Public art, Jiménez explained, hinged on the issue of access and its consequence, the issue of interconnectedness: “nothing is accomplished, even on a personal level, if [an artist] puts his work in a community and no one relates to it.

Climbing upward in front of the Houston skyline, visible through the plate-glass wall of UHD’s Shea Street Building, Jacob Hashimoto’s Cloud Deck (2010) is an artwork that appears to be in motion, radically transforming as the viewer moves up or down the staircase. Like an actual cloud, it is at times an opaque serpentine shield, hiding segments of Interstate 10 and the midsections of buildings, and seconds later it dissolves into a teeming flock of white paper kites. From the outside, seen through the building’s gleaming facade, Cloud Deck resembles a swarm of butterflies, trapped—or perhaps preserved—in a glass vitrine. Like so much in life, it all depends on the point of view.

Pablo Serrano’s Spiritus Mundi (1977) takes its name from the Latin concept for humanity’s spiritual source, which W. B. Yeats famously invoked in “The Second Coming” of 1919. Spiritus Mundi encapsulated the artist’s interest in forms that could be opened, “revealing the ideal, luminous interior space” that is within all of us and leads to unity, mutual understanding, and love. The artist recognized modern man—or “man in space” in reference to Houston’s preeminent role in space exploration—as being open to “the great struggle that mankind wields from birth to death, testing its essential values of emotion and reason.” For Serrano, Spiritus Mundi visually reconciled chaos and human unity while recognizing their complementarity and interdependence.

Prayer Meeting (1997) by the late artist and activist John T. Scott, was inspired by the broad African American experience of the South. The unique fusion of African, Caribbean and Creole cultures in New Orleans, where Scott was born, provided a fecund framework for his work. Equally interested in the musicality and daily rhythms of his native city, Scott often said that he had let its sidewalks speak to his soul and imagination. Like many of his monumental kinetic sculptures, Prayer Meeting evokes New Orleans and the South yet reflects on much broader universal concerns. Incorporating forms from daily life (such as folding fans, shovels and African masks), the work simultaneously conjures images of deep spirituality, ancestral homelands, and the harsh physical labor from which many cultures have emerged.

For sculptor Kendall Buster, there is no distinction between art and science. Trained as a microbiologist, she initially explored the forms she saw through a microscope. Indeed, her large-scale sculptures such as Flow recall early experiences in the lab: “there’s a point where you almost feel like you’re in that space [as if] you’re actually moving through a [microbial] landscape.” Though the sculpture gives the sense of a cloud or of being underwater, it is non-referential and meant to operate as part of the architectural space. Flow’s semi-transparent forms appear as topographic planes that surge and swell in the space depending on the viewer’s vantage point, in the same way that Buster imagined moving through imaginary tiny worlds. Flow references fluidity and dynamism, concepts that also resonate with anatomy, and with the function of the human eye.

George Smith’s lifelong pursuit revolved around merging mainstream Minimalism and the abstract symbolism of West African cultures. Smith remained steadfast in this commitment even as many of his contemporaries moved towards greater nonreferentiality. Ever the iconoclast, Smith made frequent trips to Africa during his long career and these experiences profoundly marked his work. Bandiagara (1990) gets its name from the eponymous site in the Land of the Dogons, in present day Mali. Smith had visited this West African landscape of cliffs and sandy plateaus during his travels. The sculpture recalls the ancestral architecture and ceremonial grounds of the Dogon in its stylized forms. Yet, Bandiagara takes on added meaning since it also embodies the spirituality and mythology of this African culture.

Frank Stella’s Euphonia (1997), a three-part mural at UH’s Moores Opera Center, is an act of sheer generosity. The artist specifically created it to be shared—communally and in a setting alive with music and gatherings. Images of foreign currency, abstract patterns, and cigar smoke move and dance, and they move us—like music. But the creation and fabrication of Euphonia required the grandest generosity of all. In order to paint at such an overwhelmingly large scale—at more than six thousand square feet—Stella established a temporary studio in Houston. In a sweltering warehouse space, the artist and his team employed dozens of young artists to execute the vision for the mural’s component parts. Burgeoning careers were forged in the experience, as many hands contributed to the symphonic whole. Bright artistic minds and talents worked to achieve the master’s goals, but also collaborated to invent new ways of working, expanding even Stella’s reach and capabilities. The dynamic was that of a medieval guild, with brilliant apprentices working individually and collectively, approaching daily challenges and making significant breakthroughs. [Adapted from “Frank Stella” by Don Bacigalupi, published in On Site (http://publicartuhs.org/about/onsite/)]

Five-Minute Tours: “From the Vault: Selections from the...

Five-Minute Tours: Darcie Book at the Fort Worth...