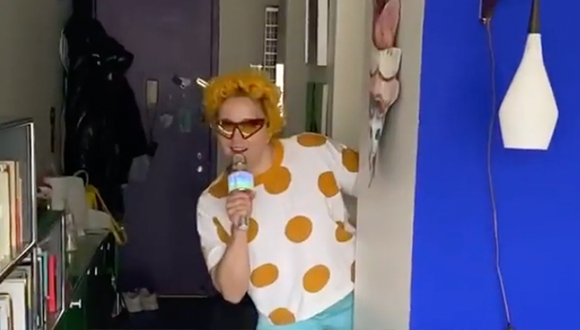 Happening right now, Friday, April 10: New York-based artist K8 Hardy has begun her partial takeover of Glasstire’s Instagram for this weekend. The self-described “Random Degenerate of USA,” originally from Fort Worth, will post to Glasstire’s Instagram Stories and Instagram TV for a weekend of unpredictable content in unpredictable times. As she stated in a New York Times interview about her one-woman show at Reena Spaulings Fine Art, NYC: “I prefer to make the art first and analyze it later. I like to feel like as if I’m making it up.”

As with our previous Instagram takeover with Austin’s Sean Ripple, K8’s work is part video art, part performance art, and online-heavy. Her Instagram and Twitter feeds are part of an art practice spanning two decades. K8 is also a strong advocate and collaborator with W.A.G.E., an organization whose mission is “to establish sustainable economic relationships between artists and the institutions that contract our labor, and to introduce mechanisms for self-regulation into the art field that collectively bring about a more equitable distribution of its economy.”

K8 Hardy (USA, b. 1977, Fort Worth TX) is a New York-based punk rock artist represented by Reena Spaulings Fine Art in New York. Hardy is an avid amateur who works across varied mediums including video, photography, scuplture, performance, and the next big thing. Through her art practice, she unwittingly became a brand. Hardy came up through the Riot Grrrrl scene. She has participated avidly in collaborations, activism, and collectives, like W.A.G.E. and LTTR. Her work is in the collections of the Modern Museum of Art, The Guggenheim, and The Whitney Museum of American Art, among others.

DiverseWorks Signs Up for Fair Pay to Artists

Beware of enterprises that require new clothes. Unless...