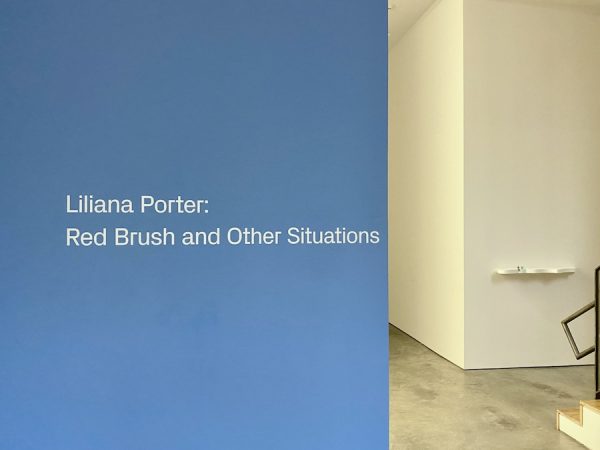 Curatorial text by Tobias Ostrander: “The red brush that is the subject of the painting is displayed as involved in a process of trying to clean or make order out of the chaos represented, by sweeping the fallen objects to one side.”

Via the gallery: “As Ostrander notes, ‘With all of Porter’s works there is always the sensation of a wink or knowing smile being implied. She is consistently the clever savant playing the role of the innocent child looking to understand or construct meaning. Her works perpetually escape irony however, through their projection of the sincerity of their investigations.’

“A native of Buenos Aires, Liliana Porter relocated to New York in 1964. In 1965, along with artists Luis Camnitzer and José Guillermo Castillo, she co-founded the New York Graphic Workshop, which produced prints while redefining conventional models for making and distributing art.

“In addition to her print work, Porter’s art engages with notions of time, memory, and emotionality that define the human condition via the forms and movements of small flea-market figurines and found objects across austere backgrounds. Porter’s dry wit and sophisticated sensibility carry through across media, and she describes her art as ‘interested in the simultaneity of humor and distress, banality and the possibility of meaning.’

Five-Minute Tours: Finding Our Way at The MAC,...