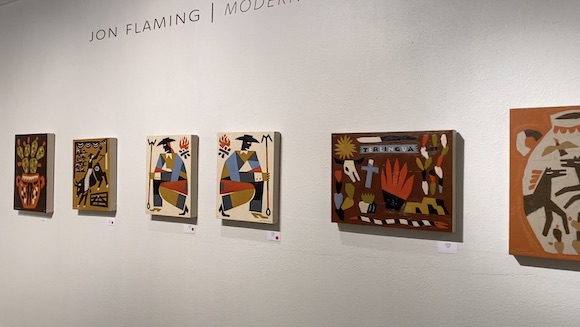 “Flaming has embarked on an ambitious subject: the American cowboy, an icon that combines myth, legend, reality, and childhood play. Through simplification of the forms the Cowboys become iconic characters who wrestle with livestock, land, and elements. They drip sweat from the noonday heat and keep watch at night by light of the crackling campfire. The canvases incorporate Texas cultural markers like rattlesnakes, grackles and prickly pear cacti to help shape the visual landscape. The works create an active narrative of the Modern Cowboy.

“‘I truly want to be distinctive stylistically,’ he says. ‘A number of the early Texas artists were painters in the middle part of the 20th century. I was influenced by those artists, but I’m also influenced by Paul Cézanne, Paul Gauguin and even Pablo Picasso.’

“Indeed, in looking at Flaming’s portraits in his newest series, you’ll find his shadow-faced subjects crouched and bent, wrapped inside the paintings’ tight borders, reminiscent of Picasso’s vulnerable female figures.

“Flaming is also a former graphic designer, working with corporate clients such as American Airlines, Dell, FedEx, Frito-Lay and Neiman Marcus. His art and design practices inform each other. In fact, this artist uses modern technology to create his color studies for paintings depicting ranch hands, historic dance halls and the shades of the Texas sun. Flaming’s distinctive style has earned his work placement in permanent collections including the Grace Museum in Abilene, the Tyler Museum of Art and the San Angelo Museum of Fine Arts, as well as many prestigious private collections. With the support of his city and state, Flaming continues to push the boundaries of what Western art can be. His work is a testament to the famous Lone Star state-of-mind—proudly independent while steeped in tradition.”