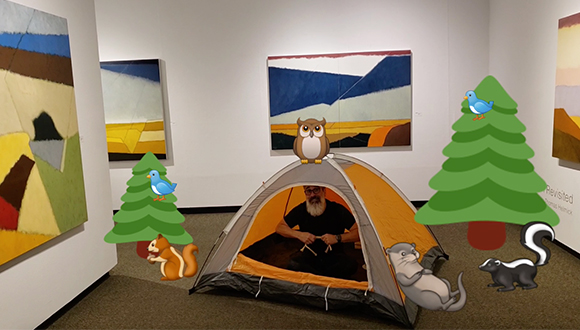 From the artist: “My first visit to the Grand Canyon was in late winter 1978, and I was 26, wide-eyed and adventurous. The South Rim Grand Canyon Village consisted of just one hotel, one gift shop, one RV/camping area, and the park ranger’s office. I spent three days in the canyon, and it indeed lives up to its name, the majesty and grandeur is beyond description. Of course, this was before the ubiquitous cell phone, and I was without a camera, but I was never without my sketchbook. At every turn, at every switchback, I had to stop. I had to capture as best I could all that was before me. I started my first Grand Canyon Series some years later; those sketches were subjects to countless paintings and pastels. I went through those same sketches several times, and as the memory of the canyon faded, I felt the series exhausted.

In 2016, I revisited the canyon. I must say I was dismayed at the vast over-development of the Grand Canyon Village and the mass of tourists. But the majesty and grandeur stands undiminished. I felt compelled to start my Grand Canyon Series II.

In this exhibition, there are pieces from both series, and they are part of my attempts to capture that majesty and grandeur that is the Grand Canyon.”