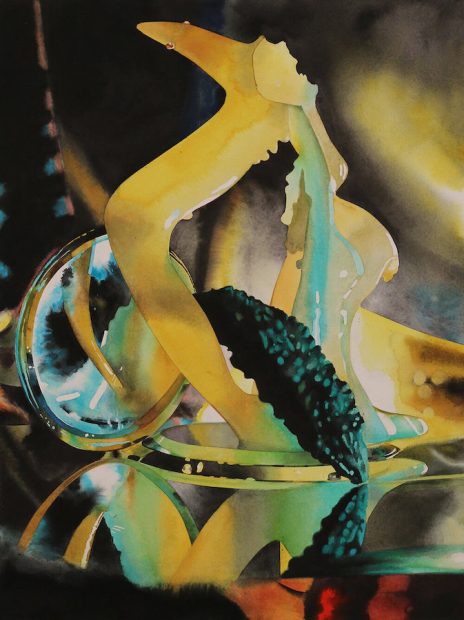 Editor’s note: Glasstire requested this video from Ulterior’s founder/director, the artist Takako Tanabe. As far as many Texans are concerned, Tanabe will always be an honorary Texan, as she established herself as an artist and curator in this state. Her gallery, Ulterior, opened in 2016. It is a tiny slice (a gem!) of a space on the Lower East Side of Manhattan, and many Texans follow her program closely; she has a fantastic eye. Ulterior is, of course, along with all other art spaces in NYC, off-limits to regular visits during the Covid-19 shelter-in-place order.

A solo exhibition of Mamie Tinkler’s work at Ulterior, New York City. Dates: March 14-April 12, 2020. This is Tinkler’s first show with the gallery.

“Using the tradition of still life as a starting point, Tinkler depicts enigmatic scenarios made up of objects that hover on the edge of familiarity. These dream-like spaces first generate a jolt of recognition—a red rose, a vanity mirror, a strand of Christmas lights snap into focus—but the disorienting compositions quickly unravel the logic of the everyday, replacing it with studied artifice, heightened drama, and a slight absurdity.

“Tinkler bases her paintings on photographs that she stages with an assortment of objects including mirrors, ropes, candles, and printed photographs. Painted with watercolor and gouache on board in lush, saturated hues, the paintings appear almost photo-realistic at first, but closer inspection reveals a looser approach, with large washes creating dramatic shadows and mysterious voids. Mirroring, doubling, and refraction create intricate spatial puzzles, with a persistent tension between surface and depth. The works’ theatrical lighting calls to mind a stage set, with Tinkler’s strange or estranged objects acting as characters in an inscrutable play.

“Mamie Tinkler lives and works in New York, NY. She graduated from Columbia University with a BA in 2000 and obtained a MFA from Hunter College in 2005. Tinkler’s works have been exhibited at solo and group exhibitions including The Suburban, Oak Park, IL (solo, 2015); The Good Earth at Kerry Schuss, New York, NY (2015); Days Inn at Mitchell-Innes & Nash, New York, NY (2014); and Drawings, Drawings, Photographs, at Rachel Uffner Gallery, New York, NY (2011). Her work will be featured at the Armory Show 2020, March 4–8, 2020, in the Presents section as part of a two-person exhibition.”