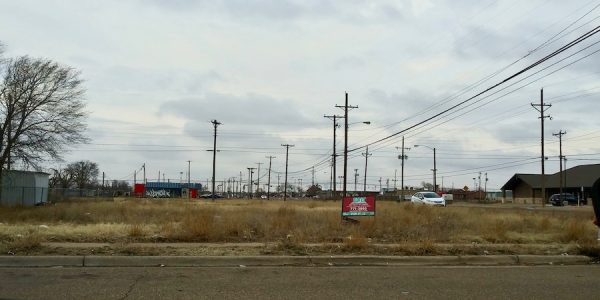 Artist, curator, and poet Danielle Demetria East has arrived in Lubbock, and hopes to make some magic happen. Originally from La Grange, Texas, East came to Lubbock after completing her BFA at Mary Hardin Baylor University. She is an artist in residence at the Charles Adams Studio Project (CASP), and makes installations and sculptures using “culturally classed” found objects like black hair-care tools, clothing, and personal objects, arranged like altars to Black Girl Magic. Words, sayings, and poetry permeate her works; a recent sculpture entitled From the Ones Who Have Paved the Way forms a path of bricks with handwritten quotes on them.

East recently launched a Kickstarter to raise funds for a new art space she wants to erect in historically black East Lubbock: the East Lubbock Art House (ELAH). Compared to the rest of the city, East Lubbock suffers disproportionately from the effects and aftereffects of a natural disaster — the F5 tornado that destroyed downtown Lubbock in 1970 — and segregation, followed by institutionally racist zoning policies. It’s separated from the rest of the city by a freeway and an industrial zone. It’s also home to Lubbock’s most beautiful natural areas, with a tributary of the Brazos River carving some actual topography through this otherwise pan-flat region. 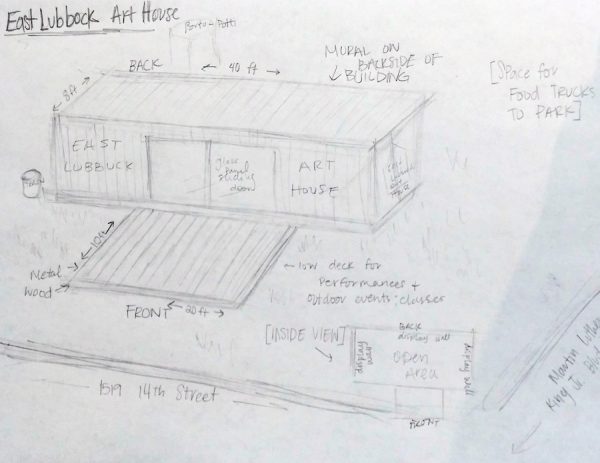 A plan for the space

East plans to erect East Lubbock Art House in a shipping container on a now-vacant lot near East Broadway and M.L.K. Jr. Boulevard, to create a space for art exhibitions and art classes featuring and led by artists of color. As she says, Lubbock needs “more accessible art, more art spaces, and spaces for artists of color.” It’s a rather poetic coincidence that her name echoes this place. Surely she’s destined to build great things in the East, brick by brick.

Natalie Hegert: So does this mean you’re moving to Lubbock permanently?

Danielle Demetria East: I think so! I like Lubbock. Lubbock is the perfect size: not too big and not too small.

I’m [originally] from La Grange, a small town between Austin and Houston. It’s far from here. 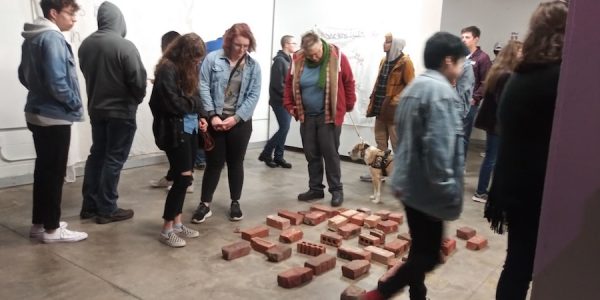 NH: It’s like, there’s that side of Texas and this side of Texas. Same state, but very far. So you came here to a residency at CASP, arriving in September. How do you like doing the First Friday Art Trail?

DDE: I like First Friday; it’s good! I actually didn’t think a lot of people would show up to it, but it’s crazy. You’d think it would be a lot of time to prepare, month by month, but now it’s halfway here. I really like it though; I’m enjoying it.

NH: So how did you start formulating the idea for East Lubbock Art House?

DDE: I was just thinking about spaces that I would really like, looking at different art spaces around here and around Texas. It would be a place that would have art exhibitions and art events, so East Lubbock would have something to do on First Friday and outside of First Friday, too.

NH: Why a shipping container rather than renting an existing building?

DDE: I think it connects with Lubbock, because we have the Depot District and so many shipping containers here (because of the rail line). And I was looking at what one of my friends did in Houston using a shipping container — Alief Art House — as well as shipping container houses [as a model]. The structure is easy to work with and I would own it outright — they cost about $5,000 — so no continuous rental payment every month. Once I get it paid off, it’s mine.

NH: There are a lot of precedents for an art project as community art center — Theaster Gates, Rick Lowe. Are you moving in that kind of tradition?

DDE: A little bit. I want to make something that connects to East Lubbock. There’s so many abandoned buildings and homes and I really think it’s time for something to be made over there, some change. I also remember when I was younger, I wanted to make art but then I didn’t really understand it, and I didn’t see many other artists, or artists who looked like me. So I think it would be important for them to see that, and also to have a growing art community in Lubbock.

NH: Have you been able to make many inroads into the community in East Lubbock? What’s your plan on reaching out and making connections?

DDE: So I’ve emailed several people, among them the City Councilwoman for District 2. I’m doing different events and then talking to different churches, too.

NH: Is this a shift for you in how you conceive of your art practice?

DDE: I’m thinking about it as a social practice/sculpture, so I’d like artists of color involved and teaching the classes. So that’s very much like what I do, and connecting with black culture. I think it’s one and the same.

NH: You will definitely shift to a more administrative role. Is that something you like?

DDE: Yeah, I like it. I’m still writing, but it’s more like grant-writing, etc. It’s like public art, too, so I’m out of the studio, in East Lubbock.

NH: What kind of feedback have you gotten from people so far?

DDE: Mostly really positive. Most people really like the idea. I had one woman, though — before I started it and put out the survey about it — who said she didn’t get it. She told me, “Well, you know where you’re at.” And I said, “What does that mean?” “Well, it’s Lubbock,” she said. I’m still not quite sure what she was getting at, whether it’s that Lubbock wouldn’t like it, or Lubbock doesn’t like art, or doing something black-owned in East Lubbock wouldn’t work, or all of that combined? [Someone else I’ve spoken with] was a bit uncertain about it being in East Lubbock, and thought I should put it in the Chatman Hill neighborhood. It wouldn’t physically be East Lubbock then, and the land that I’m looking at is really affordable, too. It could be on the First Friday Art Trail on the way to or from the Caviel Museum.

NH: One of the big challenges that you stated in your project proposal is to get the white community involved. What are the impressions that you’ve gotten so far?

DDE: A lot of people have supported it — I talked to one woman the other day who grew up here, and she told me that a lot people would tell you, “Don’t go past University (Avenue), especially at nighttime.”

I want to open up the classes [at ELAH] to everyone. Artists of color will teach the classes, but anyone can be a part of it. Being iffy about going over there and being white, it’s not actually unsafe. It’s not like we’re going to be doing classes after midnight or something. It’s right down the street.

NH: So people just have this stigma in their minds.

DDE: And it’s more because of it being “dead” over there rather than having any issue with crime or anything. The only thing over there is the United, Family Dollar, a bunch of small businesses and churches.

NH: Downtown Lubbock has that problem too, it’s not like a “bustling” area by any means. 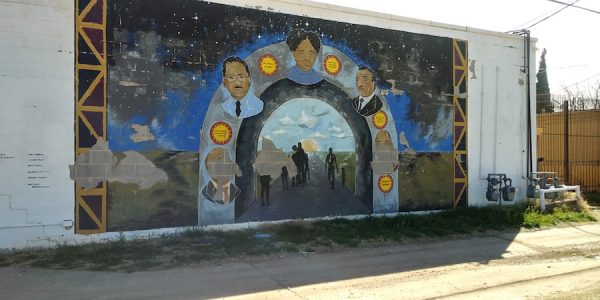 Mural in the East Lubbock/Chatman Hill neighborhood of Lubbock

NH: My impression of Lubbock, as an outsider [who lives here], is this is one of the most segregated places I’ve ever been.

DDE: The highway splits it off, and there’s this big gap between over here and the rest of Lubbock. Also with all the industrial work in East Lubbock, too, it forms a barrier. You could easily come into Lubbock and never see the “other side” of Lubbock. That’s why a lot of people think Lubbock is really small, but that’s because they only see parts of it.

NH: In the aftermath of the tornado that hit Lubbock in the 1970s, from what I understand, while east Lubbock and downtown was the hardest hit, all the development dollars went to building up the southwest side of the city. And that continues to be an issue, a form of institutional and systemic racism. It’s all suburban box stores, but all the money goes that direction instead of getting used to invest in and build up East Lubbock.

DDE: It pushes everything too far away, too. Usually downtowns are really busy, but not here.

NH: That’s one of the weird things about Lubbock! And I don’t know how many resources the city has. Based on what’s happening in downtown, it doesn’t seem like they invest a lot.

DDE: Yeah, it’s like they have a blind eye to it. 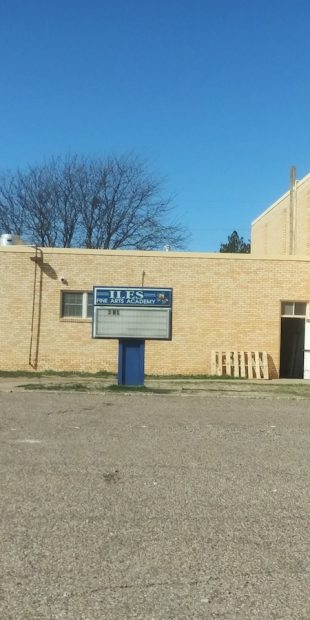 NH: It’s remarkable that we have CASP & LHUCA, and this makes [the city] look good, but you walk around the rest of downtown Lubbock and there’s so many vacant spaces — weeds growing through the sidewalk.

DDE: I was talking to Charles [Adams] and he was saying maybe the city could take on the project and that would be a way for them to redeem themselves, but it’s not like one project could do that. There are still all these streets downtown — empty.

NH: So you have [a bit of time] left on the Kickstarter! Are you prepared for if it doesn’t go through? ‘Cause it’s all or nothing with Kickstarter.

DDE: I still want to do it. It’s not going to stop me. I’m applying for grants, and I’m holding out hope that I can get it in time!

NH: Yes! It would be awesome to have something led by you out there, creating dialogue and feeding more people into the arts.

NH: Lubbock is an interesting place. For a city this size it’s amazing what it has, but I’d love to see it branch out and become a more complex art eco-system than what it is. It’s all very concentrated. Which is great right now because you’re in the center of it, at CASP, but once the residency ends… .

DDE: Yeah, I’m going to need another space to work out of. I don’t want to have anything that’s as big as CASP, but I want it to make a giant impact. Because there’s still a lot of people who don’t even know about CASP! It would also bring other people out and help grow other people’s businesses.

NH: What else is in the immediate area? Who could benefit from ELAH?

DDE: Right behind there are houses; on the next block it’s empty. Family Dollar is right down from there; there’s a mini mart, two churches.

NH: Any last thing you want to add?

DDE: Donate! You get art if you donate too.

NH: Cool. What are the rewards?