A Texan in Brussels: Part Three 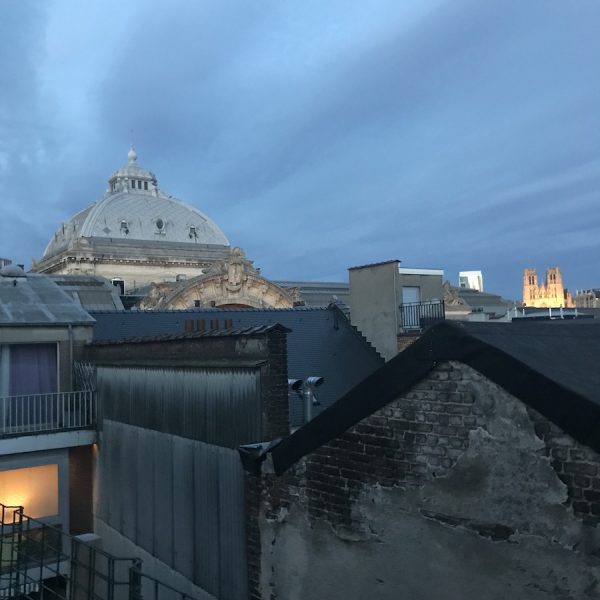 A view from the rooftop of Artist Commons Brussels

It’s mid-fall season for the art community here in Brussels, and this is the second, lesser evening for art openings this time of year. I was able to visit two galleries, cutting my evening short to get to know some artists that Sean Crossley introduces me to at C L E A R I N G. 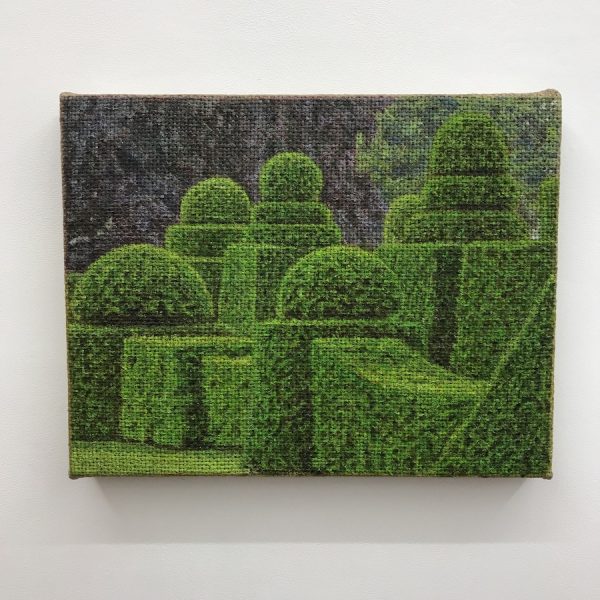 New York based Jennifer J. Lee exhibits her small oil paintings on jute with Mexico City gallery Lulu, which has a presence here in south Brussels at something of a ‘time-share’ space called La Maison de Rendez-Vous. The paintings are lovely, textural impressions of idyllic scenes in analogous color, pulled from online sources. Lee speaks about how the low thread count of jute allows for interesting imaging presentations, and the curatorial text for the show mentions that the works respond to the ‘banality of image production’ in the digital age, which is correct. The open tooth of the surfaces holds the brightness of the pigment, perhaps alluding to a matrix of pixels. 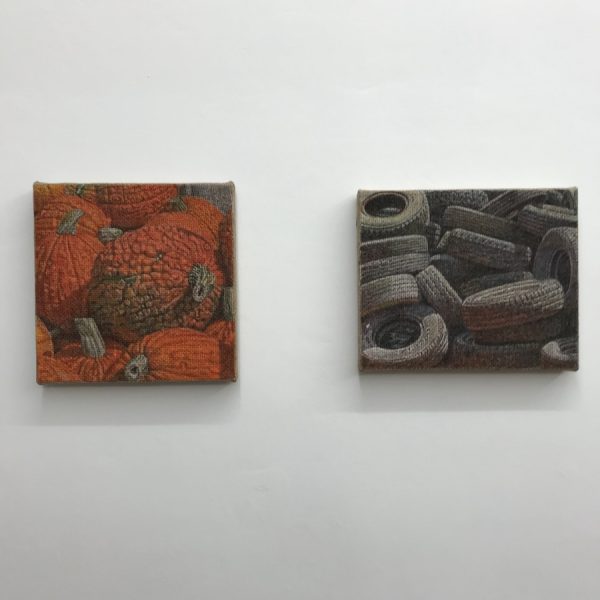 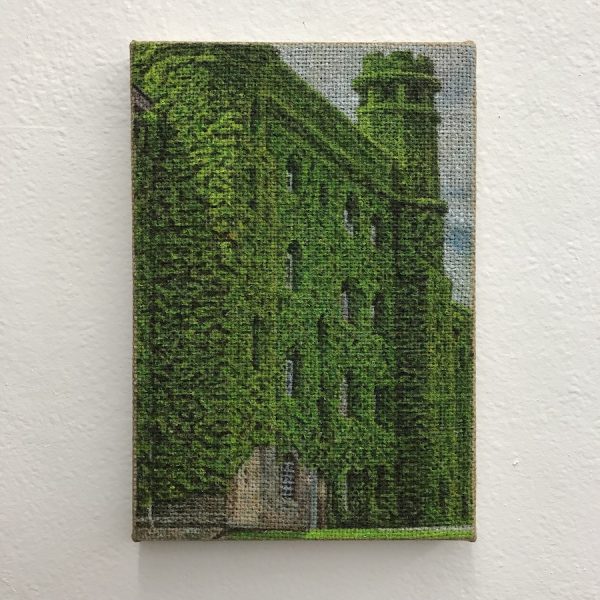 Lee is the rare American-accent-having artist in Brussels; her conversation sticks out in a crowd with even the slightest utterance of pleasantries. The other galleries renting the La Maison space for periodical shows are LambdaLambdaLambda out of Kosovo, Misako & Rosen from Tokyo, and PARK VIEW / PAUL SOTO from Los Angeles. This is the first time I’ve heard of international mid-tier galleries coordinating to share a space in a country completely separate from their own markets, but local artists here tell me that this isn’t unusual. 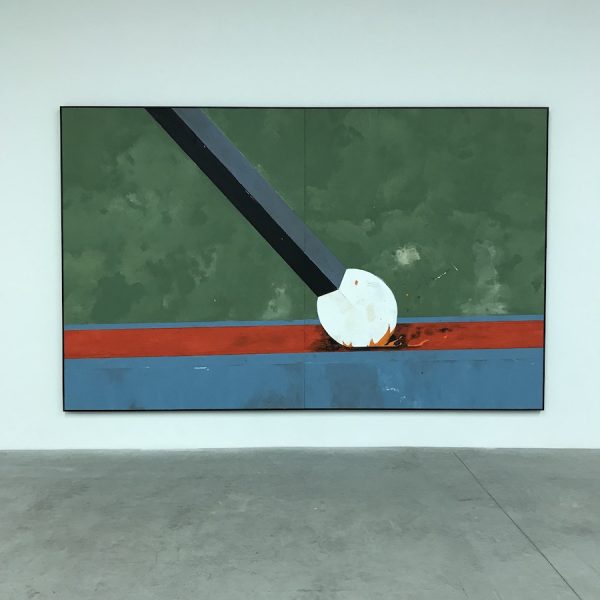 Harold Ancart’s large, beige colored paintings at C L E A R I N G offer nothing, and the audience doesn’t care. The well-dressed crowd sips drinks outside, although the reception is decently attended. Sean Crossley meets me and introduces me to several artists, among them Giulia Blasig and Peter Simpson. We try to decide if anyone has anything to say about these works, and Sean dutifully makes a round in the gallery and attempts to answer my questions. The short answer is that there is not much to say. They remind me of the works of Kirk Hayes, with less finesse and more Pop. Ancart is from Brussels, but based in Los Angeles now, and is one of the artists who helped found C L E A R I N G, although he’s less formally affiliated with it now. His relationship dynamic with the space is interesting for an international gallery, but it’s hard to get anyone to say why or how.

After our introduction at Ella de Burca’s birthday party a few days ago, Diana Duta, a Romanian-born artist living and working in Brussels, invites me to her home in the Koekelberg municipality of the city to discuss her language-based audio work. She’s happy to indulge my interest in Romanian politics and culture, and we ultimately speak more about life in general than art — a welcome change. Duta is a prime example of Brussels-based artists: from another place, they have an estranged quality, are deeply generous, and kind enough to answer just about any question. Her Georgian beetroot salad  prepares us for a long walk to the city center, where we try the Rile* book shop, but it’s closed. This happens far more often than it feels like it would in the U.S.; people don’t fix themselves so much to place and time — which is good for their practice but makes planning visits a little difficult. We continue on to a different book shop, and finally stroll to a pub and have a glass of Belgian beer before she escorts me to the metro station. She invites me to a performance she’s giving at a showcase at Artist Commons Brussels. 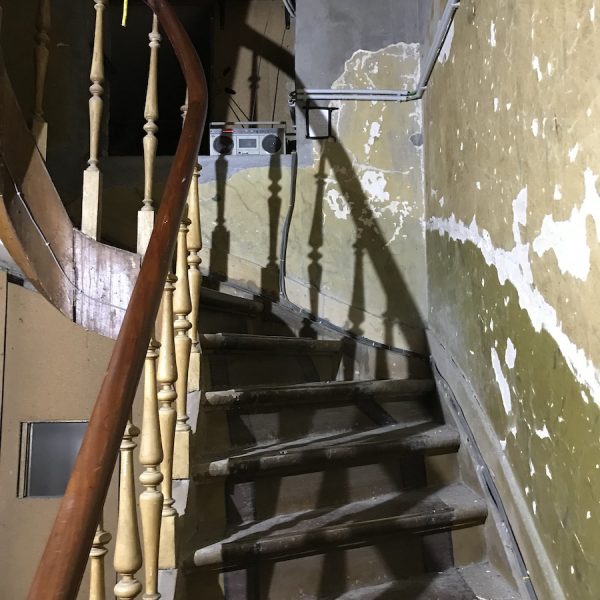 Yet another artist-run space is having its monthly performance blowout practically in the middle of the city’s center (younger people generally call this ‘downtown,’ despite the city’s medieval layout). Roger Vinas, a Spanish member of the Artist Commons Brussels collective says that it is one of the cheapest spaces to pay into — as low as 38 euro a month (although it’s unclear to me if this rate is for a single day of rehearsal time, or a more comprehensive rental rate). It’s a 4th-floor walkup near Grand Place, and has a handful of performance rooms, storage space, a makeshift kitchen, and a toilet with no faucet. Tonight is Gif #11, a monthly performance showcase, and we’ve all come to see some live art. The space is usually rented for performance rehearsal time and dance classes, and most everyone here tonight is a spectator or collaborator of dance, and the cross-pollination of dance and performance art is exciting.

Here’s a rundown of what I saw: 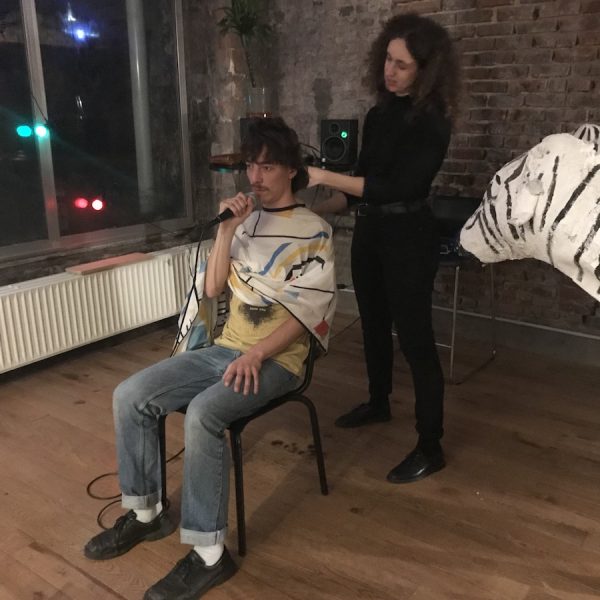 Julia E Dyck: Originally from Canada, Dyck organized the evening, and prepared a ‘pirate radio’ broadcast from some of the performers to play on all floors of the space. Her own performance, titled Haircuts, consists of an invitation to the audience to receive a haircut, live on the radio broadcast. (Aside from her art practice, Dyck is a trained hairstylist.) The bartender for the night volunteers for a cut, and the resulting conversation involves ideas on how to achieve a work-life balance, and how to styles one’s own hair.

Giulia Piana: The artist — a dancer — has spent three hours before the show in the space, attempting to be nowhere at all. When I arrive a little early, she is floating through every floor, ignoring everyone and airily touching the surfaces of the space. She wears a purple tracksuit, with two phones taped to her thigh and torso. Only one has enough battery life to make it through the full performance. 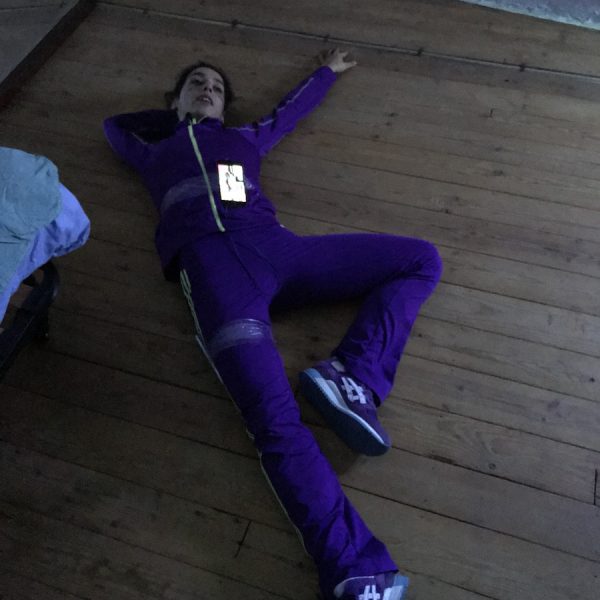 When her performance time comes, she throws herself onto the floor of the 3rd floor conference room, where we spectators are chatting. “You can sit anywhere you like, even on me,” she says. I consider it for a moment. The notion is that she has reached a refined bodily awareness after being ‘alone’ all evening. This comes through in her performance. The audience moves with her in this un-choreographed play. 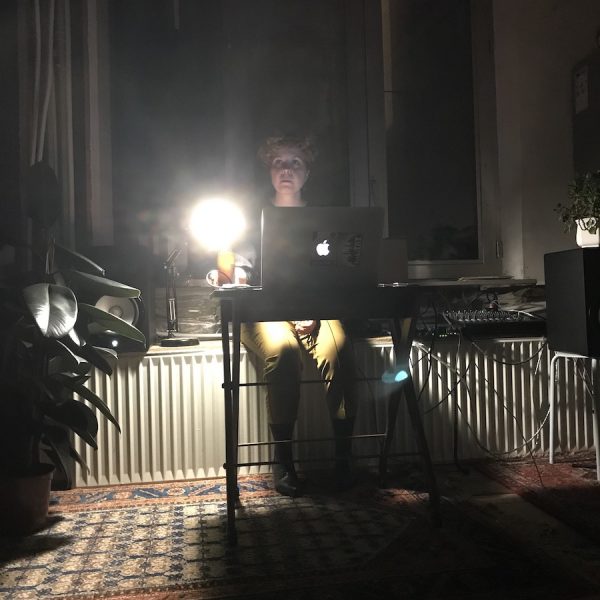 Diana Duta: Critically examining fields of science is a steady art theme in this city. Duta presents an audio performance consisting of recorded vowel sounds from English and German speakers, which she plays through a live interface with various effects. Some of these vocal clips were recorded on a residency in Arnis, the smallest village in Germany. Among other artists in Brussels, Duta, like Amelie Bouvier, puts human sight and sound abilities to critical use — here in a colonial enclave that holds as many cultures as it has subjugated.

A Texan in Brussels: Part Two