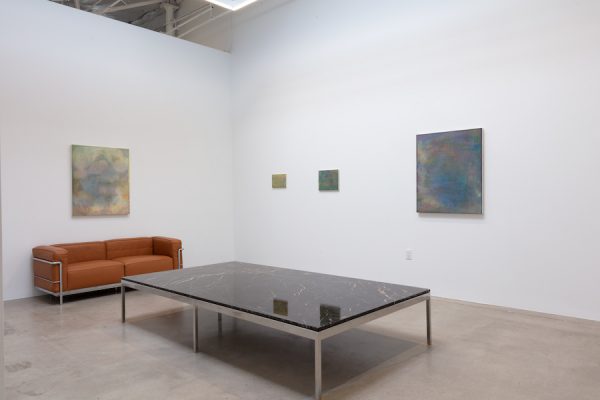 Back rooms in galleries are difficult spaces for artists. Always cul-de-sacs, they are usually the smallest spaces and contain work by either the young and up-and-coming or by artists who are not fully established with the gallery.

It was, therefore, with some trepidation that I entered the back room of the still-new Gallery 12.26 in Dallas to see recent paintings by Marjorie Norman Schwarz. Schwarz is an artist who has worked in Dallas for many years, but who has never quite broken through to the top tier of our finest painters.

Well, what I quickly discovered is that she has been in the first tier all along and that we, Dallas art lovers, have been more than a little slow to discover the extraordinary pictorial accomplishments of this refined and subtle artist. 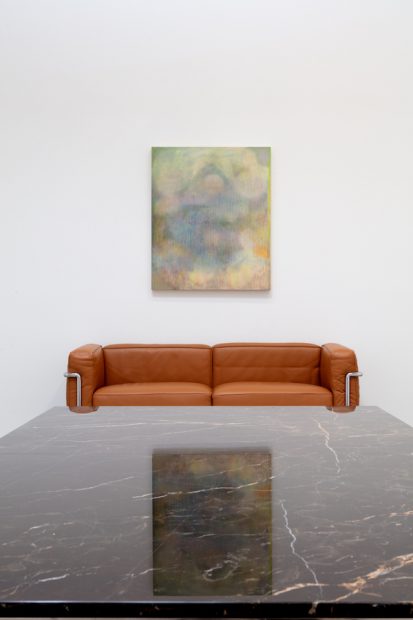 Her paintings are consciously — even confidently — subtle. They invite long looking, and even defy our early attempts at the usual gallery “scan” because of their multi-layered painted surfaces that, at first, seem more virtual than actual. “How did you paint them?” I asked her on my first trip. “They look stained and almost watercolor-like.”

Her response was direct and immediate: “With brushes.” I stared at her in disbelief, because, not until her viewers are only inches away, can anyone find the traces of brush strokes. Instead, they resemble clouds, fog, water, and colored gases —  nothing as substantial as earthly forms painted with the earthly material of paint. And, lo and behold, they are painted with what the labels describe as “water-soluble oil paint.” What they are not is stained, like the works of Greenberg’s beloved Color Field painters. 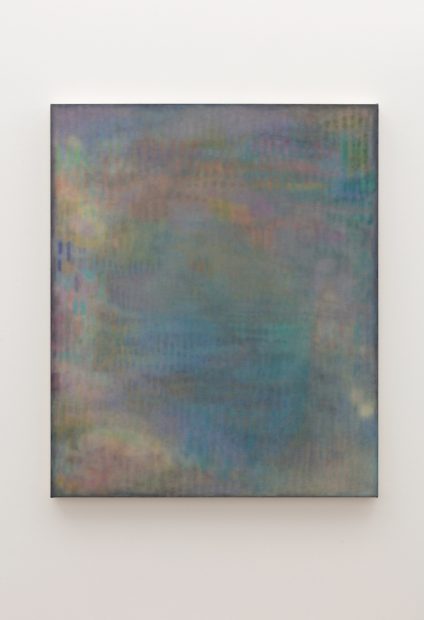 As I moved in more closely for careful examination, I became aware of squiggly vertical forms that interrupt the pictorial surface, but which, like that surface, have no clear place in space — illusionist or otherwise. In a way, the paintings have the quality of over-glazed porcelain, as if they were created “by hand” and then fired or put through some process of computer enhancement to rid the picture of its sense of surface.

As a person of the “flatness” generation of Franco-American pictorial formalism, I have been trained to value surfaces which are “honest,” and which turn pictures into what the art historian and theoretician Sheldon Nodelman once called “picture objects.” For that reason, I have always had a much easier time with the abstractions by Schwarz’s husband, Ludwig, who makes paintings with surfaces that one can almost describe as “dumb” in their literalness as “painted surfaces.” No surface subtlety there.

For him, as for many abstract painters, it is the business of the pictorial surface to be “flat” and unyielding. Marjorie Schwarz values precisely the opposite. She paints pictorial surfaces that are multi-dimensional without having any of the obvious tricks of illusionism so familiar to historians of western painting. In this, she is more like Turner, Gauguin, and Rothko — artists whose “colors” are never simple areas of a single color and whose surfaces can be called either filmy or waxy — in any case virtual, and never flat. 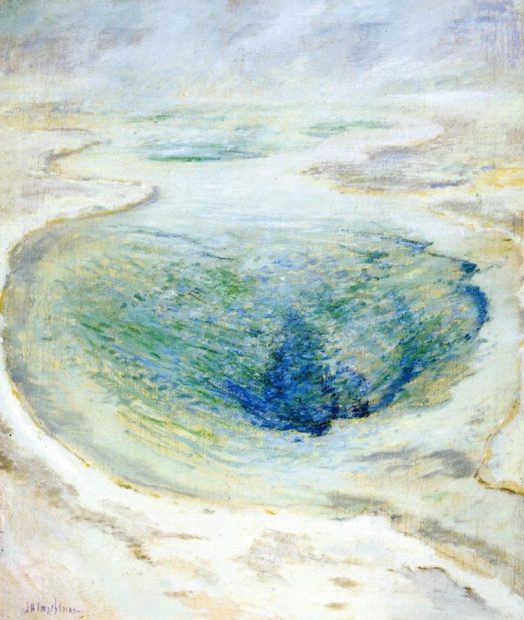 In looking at the paintings with Schwarz, I was, like all art historians, reminded of works of other artists and asked excitedly if she knew the series of “blue pool” canvases painted by American “Impressionist” John Twachtman in Yellowstone Park in the winter of 1905. She no knowledge of these particular paintings, but, when I pulled the images up on my phone, she was immediately intrigued and actually did her own search into Twachtman’s work to find her own favorite antecedents, which weren’t, of course, antecedents for her at all. The resonance between the work of this secondary American artist of the late 19th and early 20th century was validating rather than causal. He too used brushes and paint, and his surfaces are multi-dimensional and vaporous and utterly beautiful.

The supreme pictorial achievement of Schwarz’s paintings is that all forms in them are blurred — no edge can be grasped. And, for that reason, they are sheerly “optical” with none of the “haptic” quality so important for modernist painting in both theory and history. Nor can one find and identify forms — pools, mountains, trees, whatever. The viewer becomes suspended in gas or water or mist, unable to experience gravity in any way. In this way, they are like Monet’s late “Nympheas” with their non-existent horizon lines and their essential placeless surfaces.

Yet, are they like Monet? The answer is no. Because Monet always retains the illusion of the plane of the water on which the nympheas of his title — the waterlilies — float as serenely as swans tethered to the bottom of the shallow pond. Nothing is tethered in Schwarz’s faeric world. And, when we attempt to plunge into the pictures — always a desire of the viewer — we plunge into the pictorial unknowable with no clear way in and no way out. 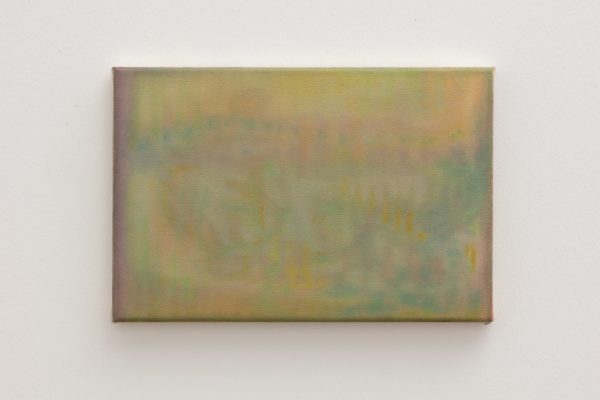 What might, for all of that, be terrifying for us becomes, in the case of her modestly dimensioned canvases, a slow sensation of bliss — of aesthetic experience almost without end. They are, quite literally, unlike any pictorial surfaces I know. As I ratcheted through what remains of my visual memory, I suddenly hit upon the imprecise image of a 1950s canvas by the Japanese-American artist, Kenzo Okada, that I had seen years ago in a north Dallas house. (My google image search resulted in works which are more decidedly geometric in their compositional strategies, despite similarities in palette.)

The palettes of Schwarz must be mentioned, if only because they are so disarmingly pastel. I was reminded of the sexist praise heaped by a male critic on the paintings of Berthe Morisot, the palettes of which were once likened to gems and crushed flower petals. And I went through my hundreds of detail photographs of Morisot’s paintings in the superb exhibition at the DMA to see whether this was a promising avenue of comparison.

It wasn’t. For all her pastel colors, Morisot was a gestural painter, who valued the three-dimensional mark on the canvas of her strokes of paint and for whom, even when she scraped down her paintings, another pictorial attack revealed the texture of the canvas support. The latter holds no real interest for Schwarz, and, as we look at her works, we forget all about it, too. Morisot made a mess with her pastels. Schwarz creates the ineffable. 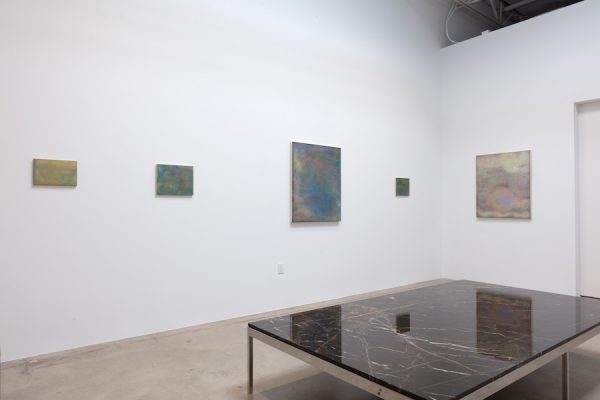 I confess that, had I curated the exhibition myself, I would have confined myself to the larger series of vertical paintings — 36 x 30 inches in portrait format, of which there are four in the current exhibition. Yet, the gallerists included smaller horizontal works — all beautiful, but lacking the ambition of the larger works — surely for reasons of price point. How amazing it would have been to have eight or nine in same dimension holding the four walls of the space. Fortunately, the gallery has several of the larger works on site, and the owners are happy to pull them out for your inspection.

To conclude, I invoke the title of one of the most wonderful exhibitions I have seen in my long life of cultural tourism. Called Ice and Green Clouds, it was an historical survey of the origins and development in Korea and China of the glaze known today as “celadon.” It was a series of pot after plate after pot in beautiful cases at the Indianapolis Museum of Art in which one looked simply at the glazes and at the sheer pictorial variety of celadon — chromatic and illusionistic.

One of the first works purchased under my directorship at the Dallas Museum of Art was a grey-green Chinese Celadon spouted vessel in honor of a museum patron, Merle Levy, who loved celadon. After my visit to 12.26, I rushed to the DMA to see it, only to want to turn right around and drive back to 12.26 to see pictorial surfaces of a richness all but unknown in art history — surfaces created in Dallas by Marjorie Norman Schwarz.

Rick Brettell is the founding director of the Edith O’Donnell Institute of Art History at the University of Texas at Dallas.