A Texan in Brussels: Part One 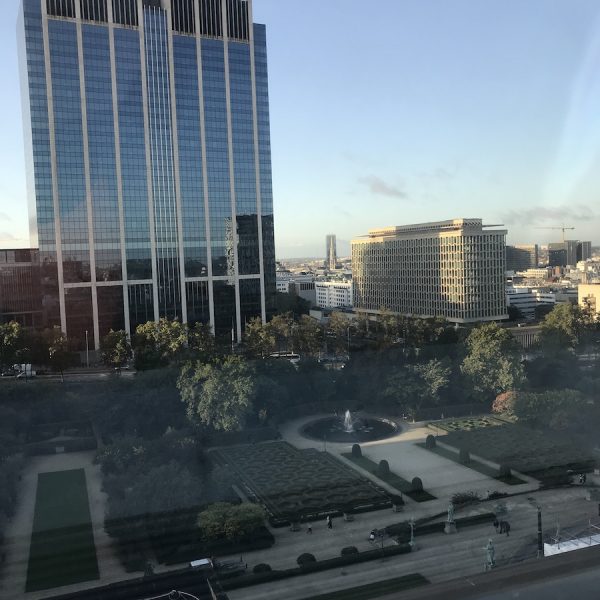 A view from the penthouse of Sarradet’s host hotel in Brussels. Outside you can see the Jardin du Botanique.

I fly from New York’s JFK directly to Brussels, overnight. This should help my jetlag, because sleeping on the plane should follow my regular sleep schedule. It does not. I do, however, get two meals on the plane. Additionally, the NH Bloom Hotel is a short 10-minute walk from the Bruxelles Nord train station. Even better: BRU airport has train platforms in its main building. This is somewhat mindblowing for an American. I am sore from schlepping my stuff, so it helps. 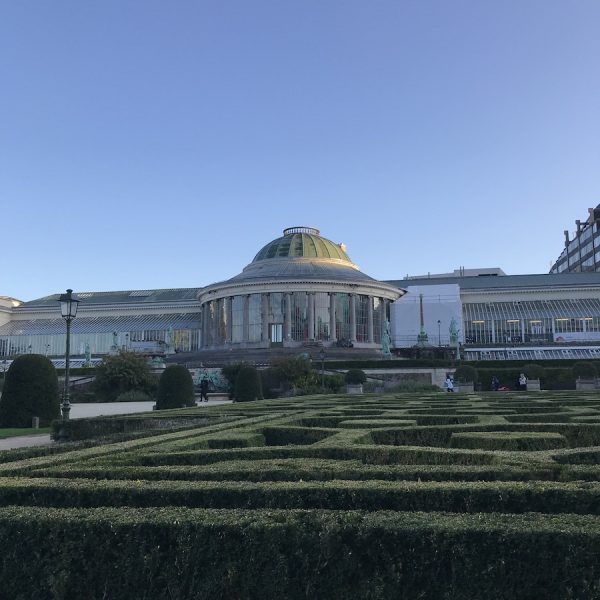 The hotel’s penthouse, where I’m staying, is quite large. There are three bathrooms and two beds. The bathrooms do not function fully, but there are enough amenities to accommodate one person comfortably. This was a former “presidential suite,” which allegedly once housed the likes of Michael Jackson, Prince, and Richard Nixon. I can see the Jardin Du Botanique from my bedroom (and I come to find that it’s a wonderful place to take a walk as the day is beginning). Overall, I have a sense of being handsomely positioned in a modern European city with plenty of rustic charm to go around. As I would tell any host at this point in my life: A bed and a bathroom is all I need to survive. A warm bed and some thermo-control sweetens the deal. The city’s tram, a pharmacy, cheap restaurants, and a couple of delis are seconds outside my door. Welcome to Europe.

Harlan Levey, owner of Harlan Levey Projects, and Gatien du Bois, curator of the Penthouse Residency, are in steady contact with me, offering to answer any questions I have. Welcoming, for sure, but somewhat frustrating because traveling, in general, takes a huge amount of mental processing for me. Consider that I have studied Spanish and French in public schools in Texas. Consider that I work, ostensibly, from home, and have saved reasonably for this trip.

Harlan messages me to coordinate exhibition visits, guided by two of the artists represented by his gallery. Fortunately, both shows were within a short walking distance from my hotel, which is in the Saint-Joose neighborhood in north Brussels. 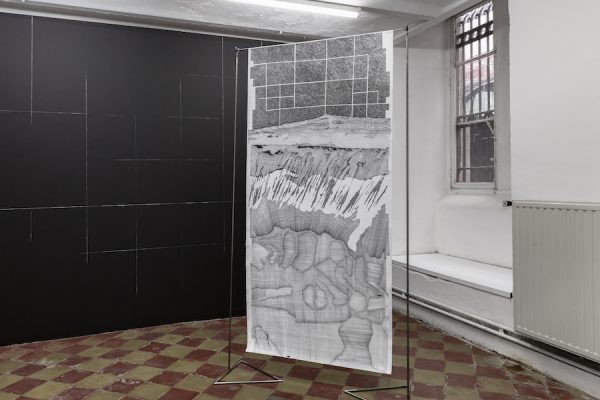 The first stop was Amelie Bouvier’s show Eight Minutes Ago at Greylight Projects, a former squat in the rear space of an 18th-century cathedral. The work kneads into the legacy of the astronomical sciences, and uncovers how rendering information is subjective. 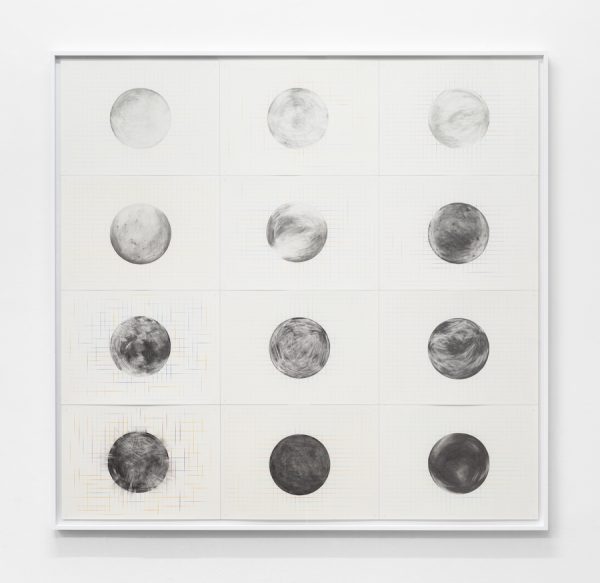 Bouvier draws lines in India ink that imitate topographical details on maps, and hers look like they could have been printed by Xerox machines. She scrawls and then erases graphite swatches on circles that swirl like images you may have seen of the sun in our Milky Way solar system. This relationship between drawing, communication, and illusion is actually older than it is new. Following a period of study at the Harvard Observatory, Bouvier worked with historians who process glass plates in the school’s archive. These plates, an older and sturdy material for preserving photographic impressions of the sky, used to hold hand-written annotations by women astronomers — some of the first to work in academia at the time. In the process of using the plates to re-print the information embedded on their surfaces, they must be cleaned by historians, which erases the writing. Bouvier’s drawings allude to these artifacts and the qualities inherent in the material. Archival information is always subject to what it is archived on. Bouvier makes the distinction that historians and scientists do not have the same job: one preserves our ideas of history, while the other preserves hard information. 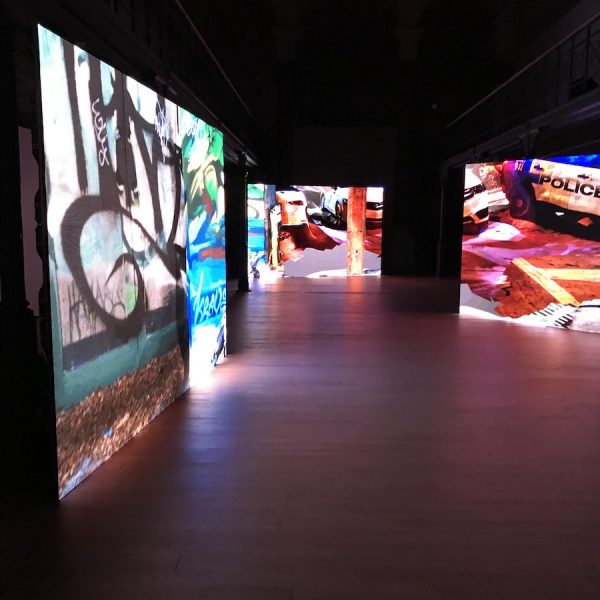 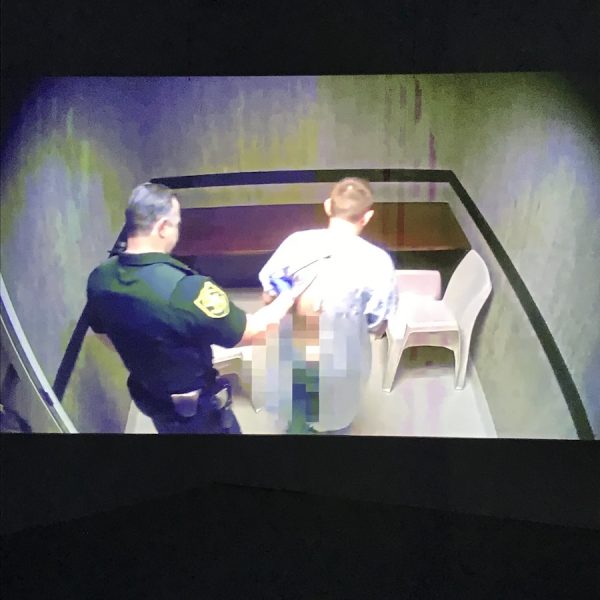 Emmanuel Van der Auwera’s exhibition The Sky is On Fire, on view at La Botanique, is part of a diptych. The other piece in the work, The Death of K9-CIGO, is on view at Harlan Levey Projects’ space in Ixelles. Van der Auwera works often with video — and sometimes with polarized film, which affects the visibility of what can be seen on screens. This work is self-contained, in the sense that it is video clips that can be viewed without any external tools to intake the information. The diptych makes use of low-resolution videos from the online application Periscope, a kind of in-between of instagram stories and snapchat, where anyone can post temporary video testimonials to a map-based interface. Van der Auwera’s videos come from the Miami area in the aftermath of the Parkland school shooting. These are cut together in chronological sequence, giving the work a documentarian feel. Van der Auwera often approaches the timely and upsetting subject of violence delivered by the conduit of the internet spectacle, and this work is a similar presentation. 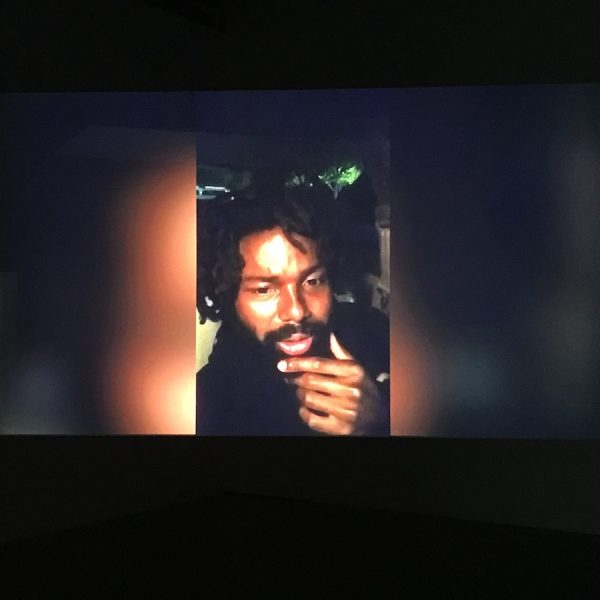 Later that evening, I meet with artist Gary Farrelly on the steps of the old stock exchange, the Bourse, by way of some online matchmaking by our mutual Texas artist-educator friend Julie Libersat. Gary picked this spot because it has the obvious air of a public meeting ground, like the steps of The Met, but it also seems to be the exact center of Brussels. From there, he assures me, we would be able to sample a number of bars, before he has to meet another friend, and before the night runs too long. Walking through this part of Brussels doesn’t take very long, and the sights can range somewhat dramatically. Gary points out the gleaming towers of plate glass that erupt from official-looking stone buildings, which are often adorned with gold-leaf flourishes that are meant to refer to a previous, more aristocratic era. “They call it Brusselization,” Gary says, giving a name to what some consider to be the careless placement of modern high-rise towers amid a cobble-stoned hub of European history and trade.

Gary is the Belgian correspondent for the Office of Joint Administrative Intelligence, which is a kind of DIY dispatch for alternative thinking on European and global cultural movements. This is among the various coalitions that Gary organizes and works within, which generally seem to tinker with the aesthetics of institutionality — a word that comes up often with him. During this month, he’s preparing for the European Conference of Institutional Ideators (ECII) in Germany. Dallas artists may know him from his time spent as an artist-in-residence at CentralTrak, and Guerilla Arts, and he returns to DFW on a semi-regular basis.

After a short night of beers in the city’s center, Gary invites me to dinner to meet some of his friends, mostly Irish artists. I can’t turn down such an opportunity. I accept.

Part Two of the series continues on Feb. 15.