Concrete Castles by the Sea: A Photographer Discovers Galveston by Way of Coney Island 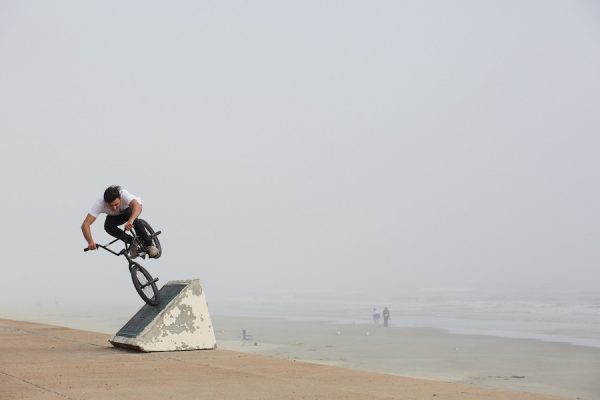 Austin-based architectural photographer Leonid Furmansky got to know Galveston on his BMX bike — riding, sometimes trespassing, along old buildings and empty streets to document what he describes as its strange beauty. For the past few years, he’s been shooting this quiet city by the sea, one that’s wrapped in mist, vacation condos, and vacant stares. Furmansky has amassed a large collection of unseen images — much like the inhabitants themselves. Galveston, Furmansky explains, is a place that wishes to be left alone.

Nonetheless, the 30-year old photographer still finds himself riding up and down its seawall, avoiding eye contact with the locals (“it has some strange characters,” he says) and shooting the brutalist buildings just blocks from the beach, a juxtaposition of urban-meets-ocean which reminds him of Coney Island, Brooklyn, where he spent his childhood before moving to Texas. Furmansky now finds himself juggling a busy freelance career (his photos have appeared in The New York Times, Texas Architect Magazine, Tribeza, and elsewhere) while working on a project which features both cities and their respective architectural backdrops.

Barbara Pucell: Tell me about your connection to Coney Island.

Leonid Furmansky: I grew up a few blocks from the water, in a community made up of mostly Ukrainians and Russians. My grandparents would take us to the ocean every weekend, where everyone from the neighborhood would be hanging out on the boardwalk; it was like a big block party. Dedushkas — basically, grandpas — these old guys would be running around in speedos, all waxed up, with their crusty bare feet. They owned the place and were completely themselves — unlike Manhattan, which was all about image, facades, and branding. Brooklyn, specifically Coney Island, was the complete opposite; it was a very authentic place.

Architecturally, it’s amazing to see the ocean, the boardwalk, and an insane amount of brick apartments right there on the water. Beyond that are huge housing projects off in the distance, which are also so fascinating. I went back to New York in my mid-20s to do street photography and document the beach area, but it had been done so many times by that point. There are just so many books already on Coney Island; its represents so much nostalgia, and I felt a little lost. I asked myself if it was just my own memories bringing me back there, to a time when my family was still together. So I pumped the brakes on that particular project.

BP: When did you move to Austin?

LF: My parents got divorced and I moved to Texas when I was 10 with my dad; my stepmom works at the the Texas School for the Deaf. Both of my parents are deaf. Moving to Austin was very difficult: I was bullied and and beaten up. Nothing like this happened in Brooklyn. In Coney Island my neighbors were Pakistani, Indian, Italian. And we all ran around together as kids, we were exposed to graffiti culture and hip hop; we didn’t have a lot of money and there was no judgement. I lived in fear when we moved to the suburbs; classmates made fun of me for having deaf parents. I started drawing, mainly monsters. But getting bullied pushed me to go after what I wanted — from BMX biking to photography to finding success as a photographer. I love being out of my comfort zone. 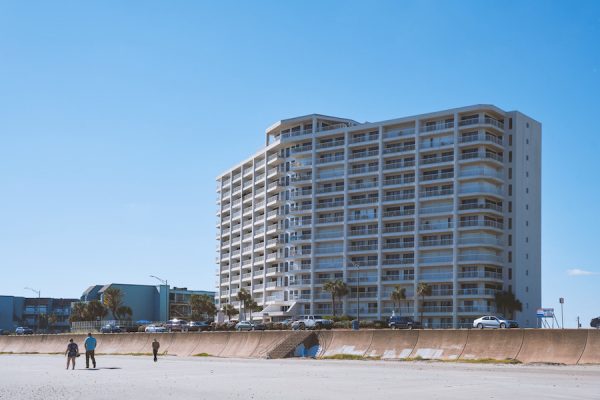 BP: How did you discover Galveston?

LF: By accident. I went there to film web edits with my BMX friends because it has really great spots to bike and skateboard. Unlike Austin, where every downtown building is bike-proof and skate-proof, there are a lot of old or abandoned structures to explore in Galveston. I started to discover its strangeness while on my bike. I’d ride along the seawall, just noticing how the people seemed suspicious, even fearful. People go to Galveston to be left alone — unlike Coney Island, where the Ukrainians and Russians want to get out on the beach and get that gnarly tan together. 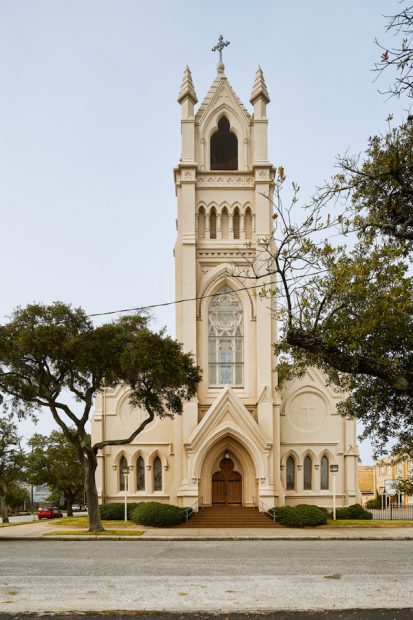 I’ve been shooting in Galveston for five years now; there is so much craftsmanship and detail in its architecture. Nicholas Clayton, who I believe was the first licensed architect in Texas, designed so many of its amazing churches and homes in the late 1800s. Seeing his work for the first time was for me like encountering a brand new culture. But many buildings were destroyed in the Great Storm of 1900, and you can still feel the trauma from that storm; there is a presence of something in that city which is no longer there. I did an assignment for Texas Architect Magazine, and after four or five days, I felt like I was being pushed out. I had to take a break from the city. You’ll know what I mean if you ever go and stay there in one of the historic homes. 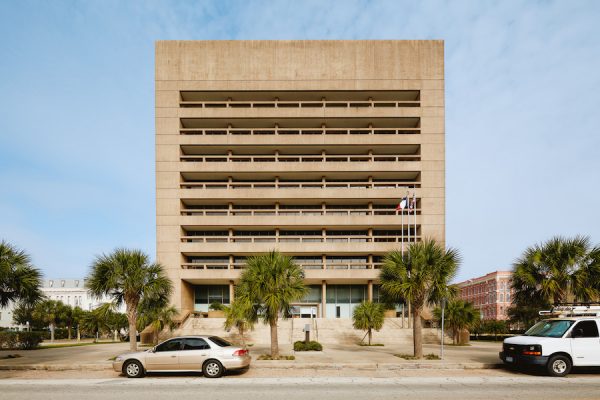 I actually first started out by photographing those beautiful Victorian houses — but it was too much of a genre, and it started to feel like a corny coffee table book. I wanted something more strange from Galveston, to trick the viewer. I went after the brutalist buildings in the medical district, for instance, rather than the beach condos the city is known for. At the time I was obsessed with Leonardo Finotti, who photographs Latin American architecture and does these one-point perspective shots of buildings. He leaves so much sky and room around the building to breathe. Because there’s so much ground in Galveston, I would spend a lot of time driving around or on my bike — it’s simpler to understand how to photograph Galveston if you’re just focusing on one-point perspective. 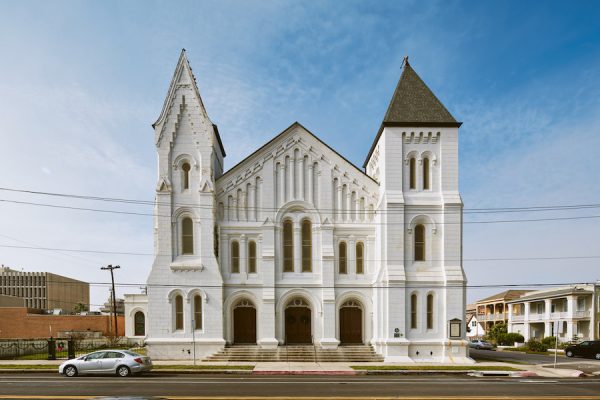 BP: Do you have plans to put together a book of these photos?

LF: I’m confused about where to go with it, actually. Right now, this project is for myself, outside of my work as an architectural photographer. I try not to have too many photos floating around on the internet; everything is online these days, and the image loses its soul. I’d like to merge Galveston with Coney Island somehow; I’ve always been drawn to the beach. And I would like to incorporate more people, but I’m not interested in classic portraits. I want to capture the ocean, the person, and the buildings behind them. Sounds odd, but I see an image before it happens. I can picture a 90-year-old man in Coney Island wearing a hat like he’s in some jazz club, with the projects behind him; now I just need to go there and find him. Or a single mom with her three kids at the playground. Or some babushkas [old ladies] on the beach. I’m a lot more comfortable with the idea of photographing people in Coney Island than the residents of Galveston. I think it would take time to establish that kind of trust with them.

BP: How does the light quality compare between the two places?

LF: Coney Island is bright, sunny, and beautiful, while Galveston has a misty mix of water and sun. 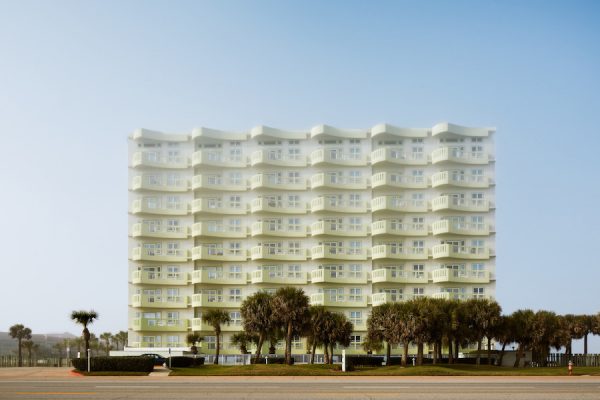 BP: So given those vastly different descriptions, what connects Coney Island and Galveston?

LF: The ocean. Being able to see the end of the earth. It has meaning in ways we don’t really know. I was on Venice Beach recently and everyone was walking toward the water at sunset, drawn to the ending. When you’re at the ocean you’re forced to confront that nothing is forever.