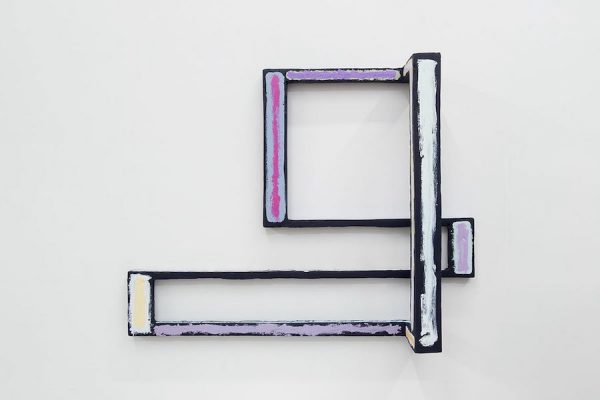 L.A.-based artist Molly Larkey’s pet-sized constructions are milling about Hilary and Hannah Fagadau’s new space, Gallery 12.26, in the Dallas Design District. For this, the gallery’s third show, the sisters have brought Larkey together with two excellent area artists —  Marjorie Norman Schwarz and Joel Murray. And the exhibition as a whole gets everything right. All three artists’ work exudes a careful physicality. There is kinship here in touch and intelligence, and in novel framing of surface versus figuration. I originally intended to cover Schwarz’s quietly serious paintings, which are superb; but kept coming back to Larkey, whose “Utterances” ask for a retort. 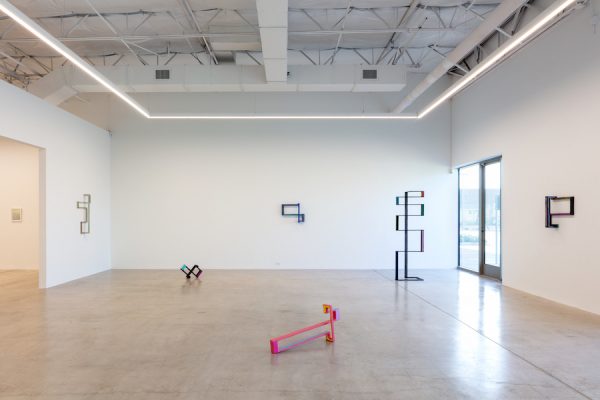 Spaced around the sleek, sterile front gallery, Larkey’s Utterances are given plenty of elbow room on the bright walls, with a few perched on the concrete floor. They’re modest in scale but benefit from all this space.

They’re all three-dimensional, grid-based iterations of right angles, usually with a base color and one or more contrasting hues loosely painted onto certain faces of the rectilinear forms. The base colors are rich, waxy enamels: purples, teals, gray-blues, with bright pinks, yellows and greens added to the surfaces. Composed of welded steel covered with stucco, they feel both rigid and informal, a quality reinforced by the application of paint which is brushed on with a toddler-like disregard for fuss or finesse; with a focus on what does and doesn’t matter. I like these kinds of decisions — I like this kind of clarity.

Utterance 6 [pictured at top] is typical of the wall pieces, playing off the architecture and its own frontal nature. It snakes around, jutting out from the wall to pass over part of itself, widening slightly in places, then thinning to a line. The eye slows down and speeds up accordingly. Its smooth-yet-imperfect surface is painted an inky-black base color which peeks out under the haphazard swathes of punchy, garish purples and pasty yellows. It’s betrayingly simple, like a well-crafted pop song.

“Utterance” to Larkey here is an interactive object. Language is so pervasive and so hidden from us, that we forget it is outside ourselves. It is a technology, one of our earliest and most defining technological adaptations, so integral that it disappears. And it is a tool, as exterior to us as a hammer. It does its work “between” bodies. And Larkey homes in on the basic, primal impulse as it lives outward — it might end up as vocal utterance, but might also be channeled into something that lingers. 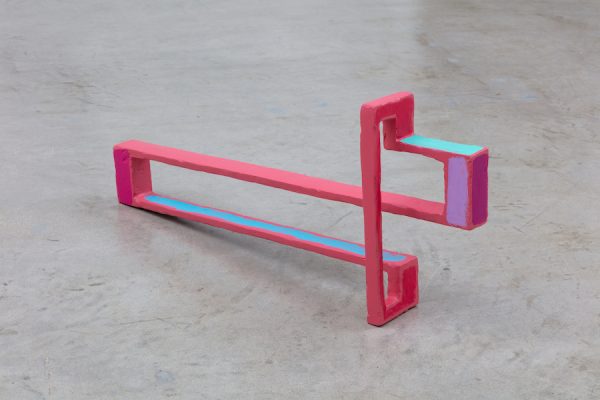 The free-standing Utterance 12 rocks back like a candy-pink Schnauzer on its haunches — rigid, weighty, at a gentle angle and a little bit precarious. It reaches out and grabs space like a drawing. Its color palette has bright pinks and teals that challenge each other. 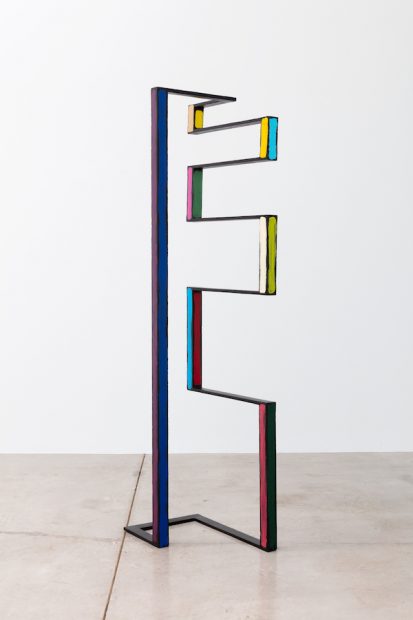 Utterance 14, the largest of the bunch, towers just above my height. It’s not quite as anthropomorphic as, say, Joel Shapiro’s work, but it’s still effectively figurative. It contrasts its blues and reds against a black ground, which juices up their richness. These things stand up in a certain way, and balance and engage in the real world; they participate in gravity.

The work joins various art-world conversations. It follows some of minimalism’s playbook with its serial forms and numbered titles: Utterance 2, 4, 7, etc. But it also grows out of a postmodern, post-painting position that offers multivalent surfaces, consistent with our screen-filled and vinyl-wrapped environments. And then there’s the preoccupation with language.

Larkey’s past work has consistently referenced language and formed concretions that try to materialize pre-linguistic impulses usually funneled unthinkingly into speech. The artist, also being a writer, no doubt mulls over the stuff of words, their visual import, what they can and can’t do. The obvious connection between her formal play and language are the echoes of text — the line from written language rerouted into sensory objects. But I can only go so far with these interpretations. 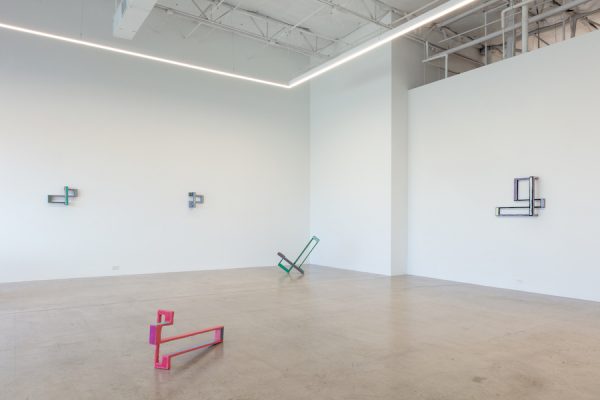 I am a 2-D person by training and my thinking is rooted in surface. My gut tells me that these objects are most concerned with flatness and orientation. Their balancing act is of front versus side, side as front, slippages between “correct” viewing positions. In the orchestration of flat surfaces, Larkey engages our bodies, suggests we move around, asks us to think physically in space. Looking and thinking are physical; they require movement and effort. When looking at art I usually shuffle around like a caveperson. I turn off language and try to wrap my senses around the stuff in the room; looking at edges of canvases from all sides, puzzling over materials, peeking underneath, following power chords to their outlet, probably making grunting noises all the while. I’d poke the art with a stick if it weren’t frowned upon. These works invite this interaction.

We forget that volume and space are relative to the surfaces that bound and define them; that flatness is, paradoxically all around. Not without reason, our built world defines space between flat surfaces erected at right angles to each other.  Larkey’s Utterances offer a way out, and reflect back that cold structure with living, breathing humanity.

What a wonderfully descriptive and clear review. Specific and humorous, too. Wish I could see the show. Michael Frank Blair delivered the goods.