Flores Mexicanas: Women in Modern Mexican Art, the Dallas Museum of Art’s (DMA) upcoming exhibition, is anchored by a painting by Alfredo Ramos Martínez that has been exhibited only once in nearly a hundred years. The exhibition is a survey of representations of women in Mexican Modernism and opens on February 16. Flores Mexicanas, on loan from the Missouri History Museum in St. Louis, was only recently rediscovered and will be exhibited in one of two galleries. One gallery will be dedicated to works by Martínez, considered  one of the fathers of Mexican Modernism,  and the other gallery will be dedicated to works by his contemporaries working in Mexico in the early-to-mid 1900s.

This, the inaugural exhibition by Dr. Mark A. Castro, the DMA’s first Jorge Baldor Curator of Latin American Art, will include more than 25 paintings, works on paper, and textiles — from paintings by María Izquierdo and Diego Rivera, to works on paper by Frida Kahlo, Francisco Dosamantes, and David Alfaro Siqueiros.

“This has been an amazing project for kicking off my time at the Dallas Museum of Art. Alfredo Ramos Martínez was among the most versatile artists of his day and Flores Mexicanas is one of his crowning achievements,” says Castro. “He worked on the painting for nearly fifteen years, beginning it during the Mexican Civil War. In many ways feels like an ode to a period in his life, and in the history of his country, that was ending.”

Flores Mexicanas, Martínez’s last painting completed before he moved to California, is a 9-by-12-foot work that was gifted in 1929 to the famed aviators Anne and Charles Lindbergh (who met in Mexico City) by the Mexican president Emilio Portes Gil. The painting, which depicts four ornately dressed women in an idyllic landscape, has been interpreted as a representation of Mexico’s diverse racial heritage, as well as an allegory of the four seasons. The Lindberghs entrusted Flores Mexicanas to the Missouri Historical Society, where it remained off view until the summer of 2019, when it was taken out of storage, conserved and presented  for the first time in 87 years. 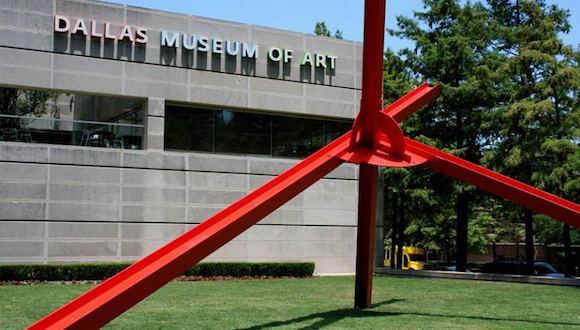 States the DMA’s Director, Dr. Agustín Arteaga: “We’re incredibly excited to build a story around this beautiful masterpiece by Ramos Martínez and the way in which it becomes a vehicle for exploring issues of gender in modern Mexican art. The painting’s fascinating history also gives us a chance to highlight the influence of Ramos Martínez on both sides of the Mexico-U.S. border and contribute to important contemporary conversations about the fluidity of that border through the lens of art.”

Flores Mexicanas: Women in Modern Mexican Art will be on view February 16-September 20, 2020. General admission is  free for the exhibition. For more information on the DMA and Flores Mexicanas, please visit the DMA’s website here.

Review: “Movement: The Legacy of Kineticism” at the...

See the beautiful mural by Ramos Martinez at the Coronado Library in Coronado,CA. Originally on view at the Mexican Restaurant in Coronado.