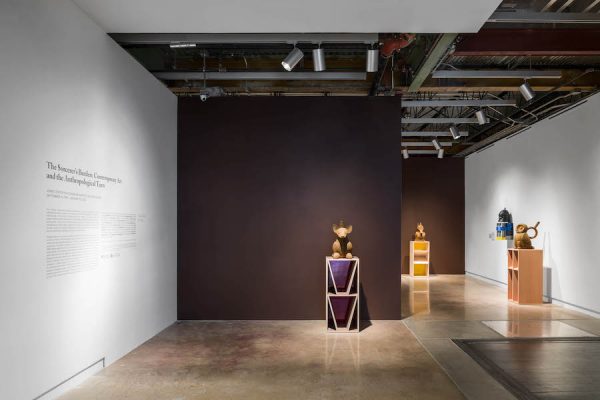 Toward the end of her catalog essay, “Being There,” for the exhibition The Sorcerer’s Burden: Contemporary Art & the Anthropological Turn at The Contemporary Austin, curator Heather Pesanti summarizes the show’s central premise, “that the burden of the appropriation of cultural property in relation to material culture and identity is complex, nuanced, and personal. All of the artists in this exhibition address these issues around culture, identity, race, and colonialism in direct and indirect ways in their work.” The exhibition includes sculpture, painting, photography, film, and video by 11 artists from around the globe at The Contemporary Austin’s downtown galleries, aka the Jones Center, and at its West Austin/Colorado River outpost, The Contemporary Austin at Laguna Gloria. 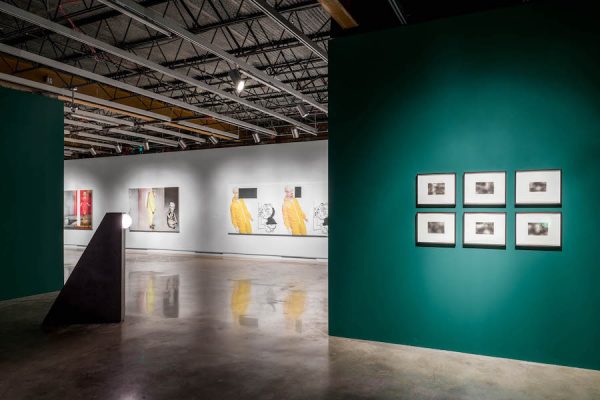 I don’t mind acknowledging that I would have had a difficult time accessing the essential bejesus of much of the work in Sorcerer’s Burden had I not been able to study the elaborate catalog, a multivalent tome that will have life and influence well beyond the exhibition’s closing. A copy is provided in the Jones Center, along with comfortable seating for those who wish to park and peruse.

Pesanti tracks the “anthropological turn” to the mid-20th century, when — turning away from the quasi-colonialist mindsets of their predecessors — a new generation of anthropologists “began to turn camera and notes over to their subjects in a noble effort to update these methodologies and to cede control and gaze.” The curator dates the beginnings of a focus on the “complex relationship” between contemporary art and anthropology to the early 1990s. Here, the corresponding shift in the international contemporary art landscape is perhaps most overtly evidenced in the film and video work of Theo Eshetu and Nuotama Bodomo. 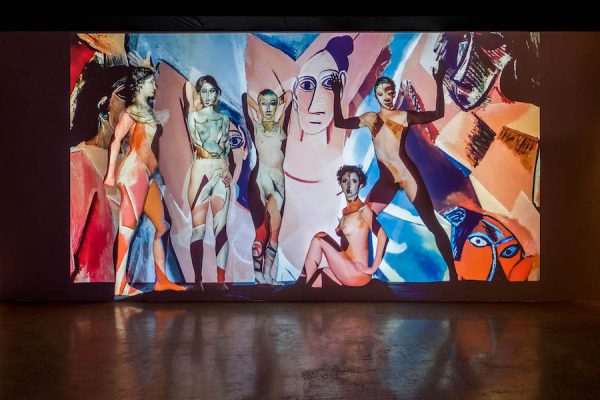 Eshetu’s 8-minute, 45-second video loop, Adieu Les Demoiselles, shown on a massive scale on the second floor of the museum’s downtown space, performs a subversive intervention of Picasso’s painting Les Demoiselles d’Avignon by projecting filmed images of live humans onto an image of the painting. Describing this act of visual anthropology, Eshetu tells the curator, “Within the story of my African heritage as an artist of the African diaspora, it’s great that I can take from Picasso in the way that he has taken from African cultures in a productive way, and continue the conversation.” 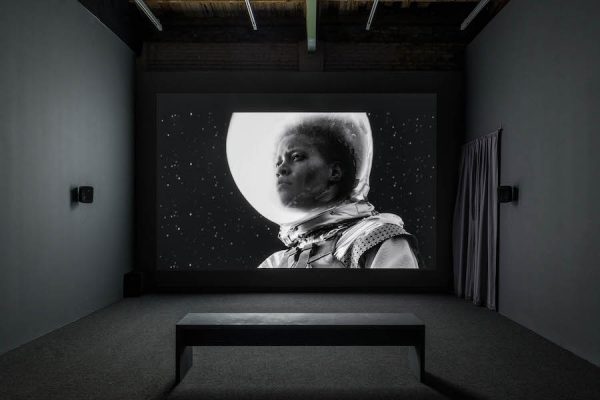 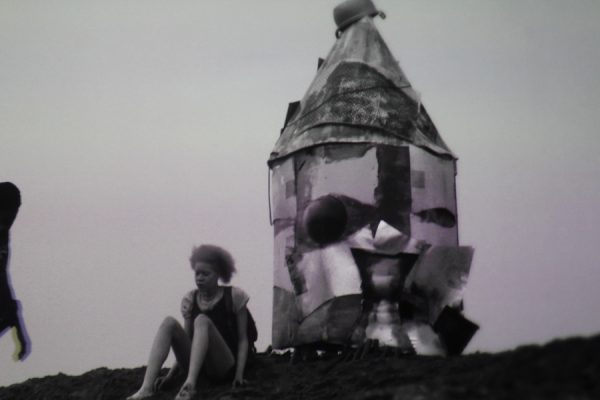 Bodomo’s 14-minute film Afronauts subverts traditional space-race iconography, normally dominated by First World superpowers. The piece concerns the Zambia National Academy of Science, Space Research and Philosophy’s improbable effort to join the ranks of nations exploring outer space and competing to land a human on the moon in the 1960s. A backyard rocket waits in a surreal landscape to carry a young woman to the moon as drunken villagers look on in disbelief. Born and partly raised in Ghana — and then raised in Norway and Hong Kong — Bodomo, now based in New York City, is working on a feature film version of Afronauts. “I used to be like ‘Fuck ethnography,’ and just completely against it,” she told Hyperallergic last year. “I resented the fact that so many of the earliest images, pictures, and videos of Africans are colonial images. In more recent years, I’ve actually come to see myself as an ethnographer, and I’m very interested in the realities of culture, especially  [those] that are being erased under globalization.” 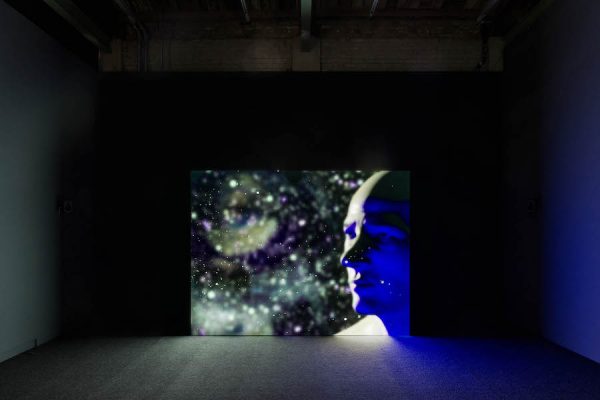 Ed Atkins’ 19-minute, 17-second looped video Material Witness OR A Liquid Cop plays next door to Bodomo’s work, and bleed-over sound issues (combined with, during one of my visits, loud conversations in an adjoining gallery) make his rumination on “ritual, death, disparity, and materiality” rather difficult to hash out. But at times, the bleak Everyman figure at the bottom of the screen reminded me of NYC sanitation worker Ed Norton from The Honeymooners thinking he was going to Home Depot and winding up in Dante’s Inferno. 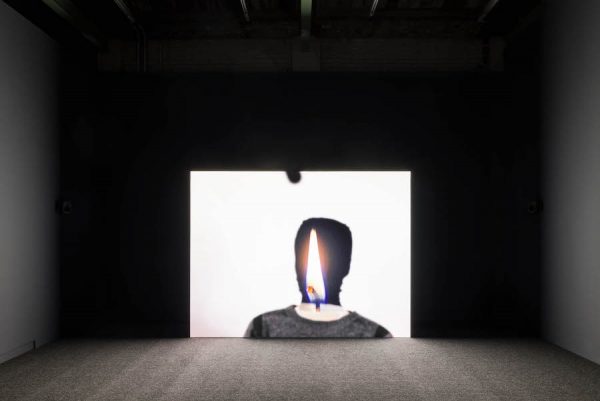 Or, as Atkins (born in Great Britain, lives and works in Copenhagen and Berlin), noted in his catalog contribution, “The Mirror Stage retrieved at last, taken away from those principled elephants and great apes of flattering anthropomorphism, gifted with calm irresponsibly to the exposure-wrecked pigeons, staggering out from beneath frowning underpasses, feet eroded by sustained contact with fried chicken and potato guano, exhausted; soft skulls poison-shrunk from olid and discarded black seed on spiked sills, or the swing of dull, unchecked toddler’s fat leg. And it dawns: slowly rising flocks, the SMUT OF THE SUN, as if a beak could crack a smile over a thousand years. And here lies hope.” Hell yes. 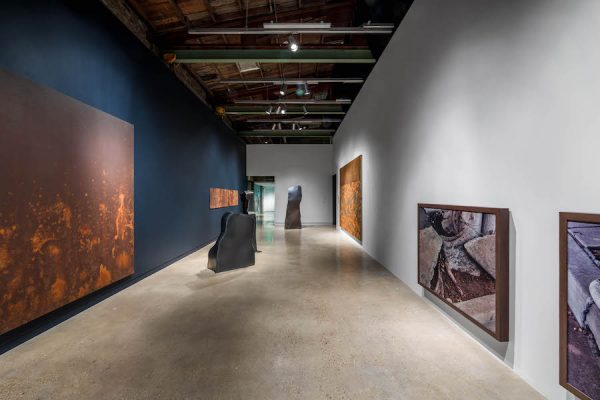 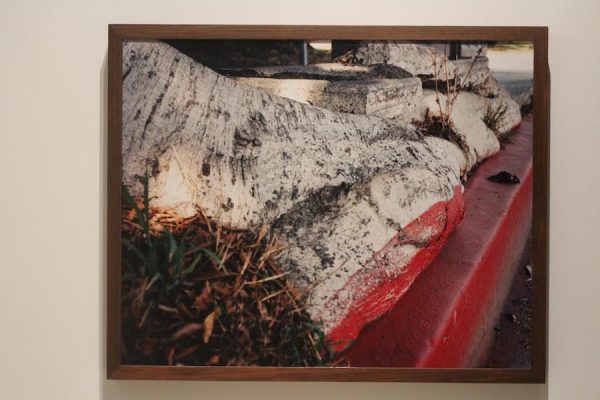 Also in a second-floor gallery, Californian Ruben Ochoa’s works find the terrible beauty in humanity’s gradual and speeded-up despoiling of paradise. His four pieces of rust on paper and linen are especially sublime. And it helps to have the catalog info about invasive ficus trees in urban L.A. to understand his three chromogenic prints in custom wenge frames, all installed eight inches from the ground to mimic the curbside slo-mo rioting performed by the trees’ disruptive growth. In one of the prints, Kissed in the 90011, iridescent fuchsia spray paint smears from the curb onto the tree’s marauding roots. 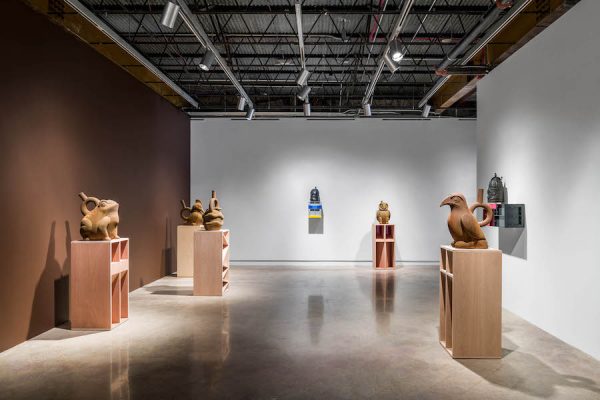 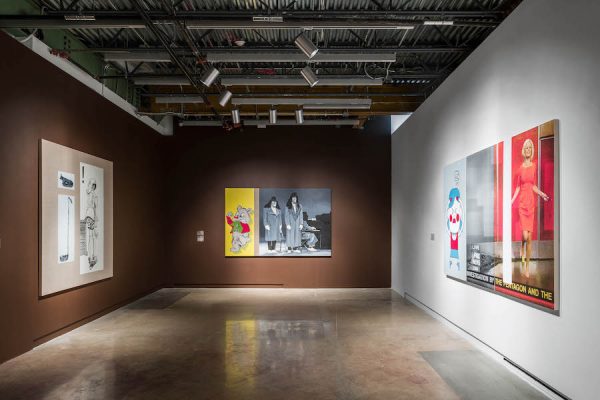 Downstairs at the Jones Center, work by Nathan Mabry (L.A.) and Julia Wachtel (N.Y.) informs the appropriation sector of the exhibition’s theme. Mabry’s handsome replications of pre-Columbian terracotta vessels rest atop stands that look as if they could have been crafted by Donald Judd — though the Marfan, of course, resisted the label of Minimalist. Of all the work in the exhibition, I most imagined Mick’s plaintive insistence that he’ll “nevah be yo beast a burden” while gazing at Julia Wachtel’s “mash-up” paintings that combine images of people and caricatures from popular culture, the world stage, and Looney Tunes. In one, Hillary Clinton stands next to two painted images of a Kostenki Venus figure. Pesanti quotes a 1987 Wachtel interview with Flash Art, in which the artist maintained, “I feel that this view of [such non-Western ethnographic objects as the Kostenki Venus] as pure, unsophisticated and unsocialized is a complete misreading, and is an interpretation filled with racist and materialist overtones.” 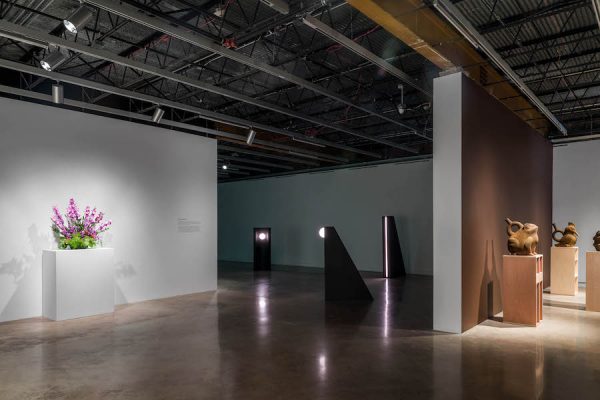 Kapwani Kiwanga (part-Tanzanian, Canadian-born, Paris-based) focused on Anthropology, Comparative Religion, and Art during her university life. Her first-floor Jones Center contributions to Sorcerer’s Burden include sleek, dark sculptures of wood, stucco, acrylic, steel, and LED lights that echo 18th-century American “lantern laws,” measures that required slaves to carry lanterns or lit candles at night and which deterred public gatherings. Pesanti notes that Kiwanga fuses fact and fiction, writing that “her work has affinities to Afrofuturism, a historical movement that emerged in the 1990s blending visual art with film, literature, music, folklore, and science fiction to create utopian (or dystopian) narratives around black identity.” 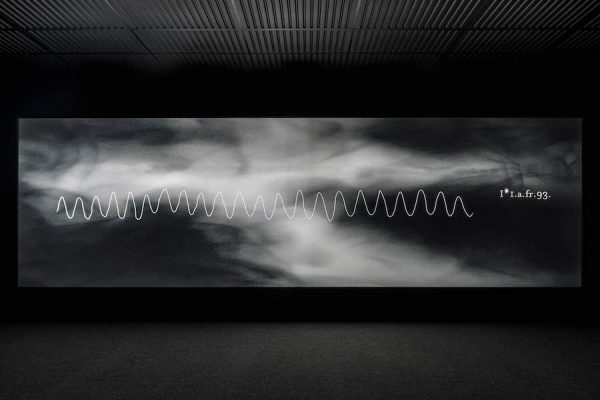 The heart of Sorcerer’s Burden lies in the work of San Antonio-born, Houston-based Dario Robleto. Commissioned especially for the exhibition, his 51-minute film, The Boundary of Life Is Quietly Crossed, shown on an extremely wide screen, navigates the history of our reckoning with the mysteries of the human heartbeat and brain wave. Amidst enchanting orchestra audio and gorgeous galactic graphics we learn about the development of the contemporary EKG, starting with the 1853 sphymograph of German physiologist Karl von Vierordt and the 1908 phonoscope of fellow German Otto Weiss. Robleto’s narration and images also relate the seldom-told story of Ann Druyan, Creative Director of the 1977 Golden Record Project, which sent earth sounds into outer-outer space aboard the Voyager I. Included on the two discs, along with Navajo chants and Blind Willie Johnson singing “Dark Was the Night,” was Druyan’s heart and brain waves, recorded as she fell in love with Golden Record Executive Director Carl Sagan. 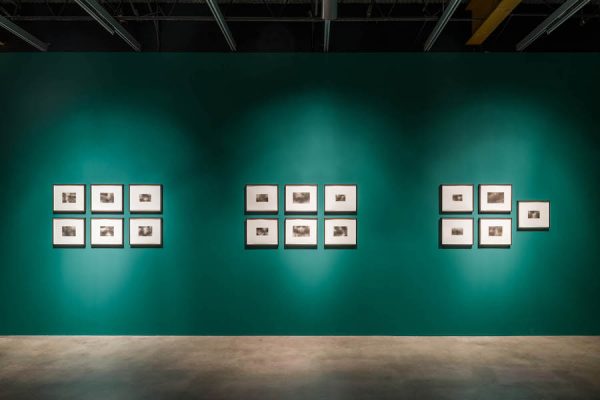 Dario Robleto, The First Time, the Heart (A Portrait of Life 1854–1913), 2017–2018. Selection from a portfolio of prints on Rising Drawing Bristol; photolithographs with transparent base ink, hand- amed and sooted paper; image brushed with lithotine and lifted from soot, fused in a mild shellac and denatured alcohol. Each 11 1/2 x 14 1/4 inches. Edition 1 of 6. Courtesy the artist and Inman Gallery, Houston. Photo: Colin Doyle.

Robleto’s ongoing heartbeat explorations also include prints based on wave recordings made between 1854 and 1913. Printed on Rising Drawing Bristol, the prints are described as “photolithographs with transparent base ink, hand-flamed and sooted paper; image brushed with lithotine and lifted from soot, fused in a mild shellac and denatured alcohol.” The Jones Center iteration features 17 prints from a portfolio of 50 and includes such titles as A hard drinker, quite recently a sufferer of sunstroke, 1874; Emotion of fear from shouting of the word “snakes,” 1896; and Under influence of hiccups, 1886. 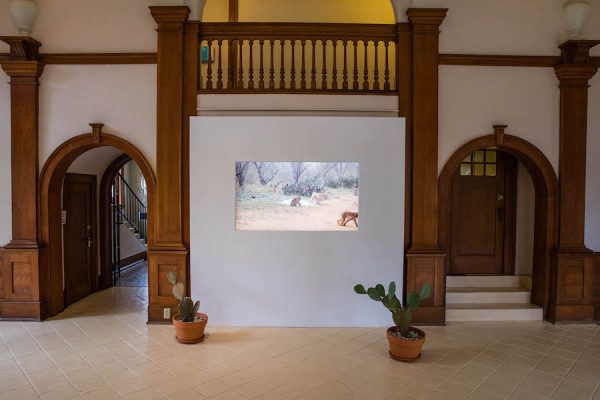 Additional Sorcerer’s Burden content is on view at the Contemporary Austin at Laguna Gloria. A 20-minute looped video by Japanese artist Shimabuku, The Snow Monkeys of Texas: Do snow monkeys remember snow mountains, plays inside Clara Driscoll’s villa. The work addresses the major problem of wildlife’s displacement by loss of habitat due to urban sprawl. In 1972, a population of Japanese macaques (aka snow monkeys) was removed from Kyoto suburbs and, rather surprisingly, relocated to Dilley, Texas, south of San Antonio. The macaques fared poorly at first but eventually adapted and thrived. Nonetheless, they seem out of place amongst the prickly pear and mesquites in Shimabuku’s video. (Regarding the work’s title: placing a pile of ice in the chaparral proved inconclusive.) 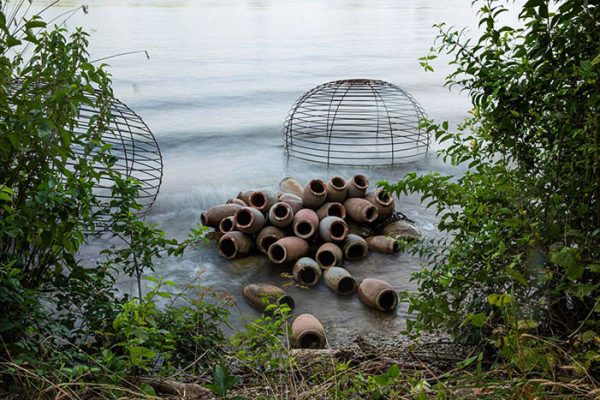 The exhibition continues in the Edward and Betty Marcus Sculpture Park at Laguna Gloria with work by Ochoa, Cameron Jamie (L.A.), and Marie Lorenz, who lives and works in Brooklyn and Austin. While the connection to anthropology may not always be obvious, curator Pesanti explains that the exhibition’s artists were selected for their experimental, exploratory deployment of anthropological (and archeological) concerns. Lorenz’ work, Trap and Weir, which consists of steel traps (ancient Mesopotamian octopus traps?) and cast ceramic vessels that appear to have washed up on museum grounds shores, add a narrative dimension. “I want my sculpture to have a hidden purpose,” the artist told the curator, “and for your imagination to wander over the object and put it to use.” 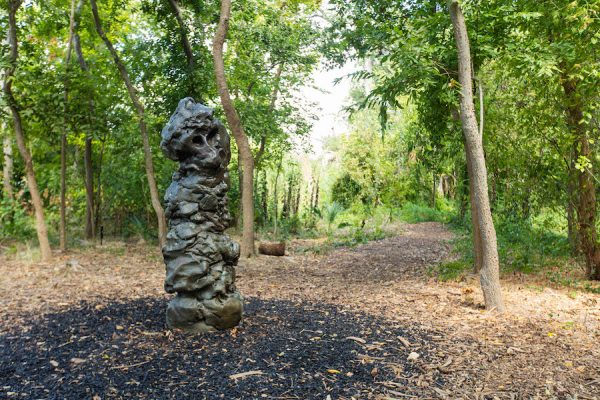 As one might expect in an exhibition that probes the intersection of contemporary art and anthropology, there is extensive consideration here of the beginnings of natural history and ethnographic museums, cabinets of curiosity, and the Wunderkammer. The catalog’s endpapers reproduce a detail of Ole Worm’s 1655 woodcut, Musei Wormiani Historia. And Pesanti might to some degree be speaking of all the artists in the exhibition when she notes of Robleto that his “ability to merge the historical lineages of art, ethnography and science points to museological history come full circle.”

On view at both locations of The Contemporary Austin through February 2, 2020.

Curator Heather Pesanti, whose master’s degree is in cultural anthropology, charts the trajectory of her thinking and source materials utilized as she prepared the exhibition. The following is a selected list of works referenced in her catalog essay:

Overlay: Contemporary Art and the Art of Prehistory, Lucy Lippard, 1995.