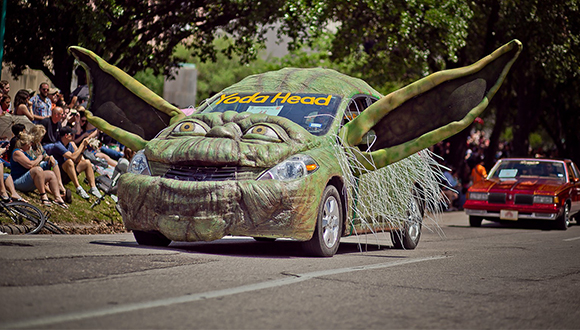 The Orange Show Center for Visionary Art in Houston is now accepting applications for the 33rd annual Houston Art Car Parade, a series of events and workshops that run throughout the month of April, culminating in the Art Car weekend. For those new to the event, the Houston Press sums it up: “Art Car weekend, and specifically the Art Car Ball, teeters somewhere in between the all-out artistic chaos of Burning Man and the debaucherous revelry of Mardi Gras. Basically, it can get a little crazy.”

With past Grand Marshals including Dan Ackroyd, Cheech Marin, and The Art Guys, the 2020 Grand Marshal has yet to be announced. While you can read about the origins of the parade here, these days the parade regularly features more than 250 vehicles from across America, Canada, and Mexico. In addition to artist-made cars, the event also includes cars made by schools and community groups. Categories include Daily Drivers (artists who drive their art cars regularly), youth entries, non-profit entries, and Low-Riders. 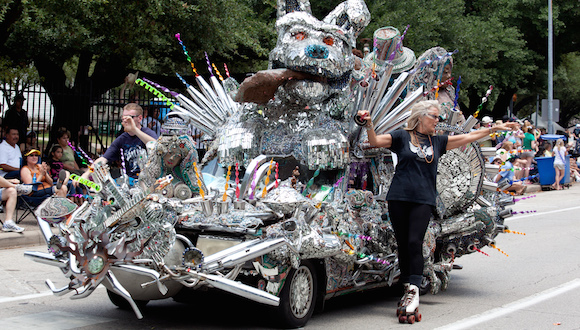 An art car can be “anything on wheels” —  cars, motorcycles, go-karts, golf carts, bicycles, roller skates, unicycles. A requirement for entry includes the art car being suitable for family viewing. (Sorry Harrison Brooks and Jonathan Whitfill — I don’t think “Crank Shaft” qualifies!) Family-friendly aside, vehicles should otherwise be decked-out. This is an ART car parade, not a car show.

To get involved as a parade participant, or to volunteer or to buy tickets to the legendary Art Car Ball, visit The Orange Show website. The nearly-month long event schedule includes three workshops that cover a range of car-to-art conversion techniques. The Parade takes place April 18th.

Now in its 34th year, the Orange Show Center or Visionary Art focuses on the ability to make basic elements of art accessible to the public. The Orange Show Center for Visionary Art is a publicly funded non-profit 501(c)3 organization. Funding is provided in part by grants from the City of Houston through the Houston Arts Alliance, Texas Commission on the Arts, National Endowment for the Arts, Brown Foundation, Houston Endowment, Wortham Foundation, Silver Eagle Distributors, United Airlines and Marilyn Oshman, as well as private contributions, in-kind support, and volunteer assistance.