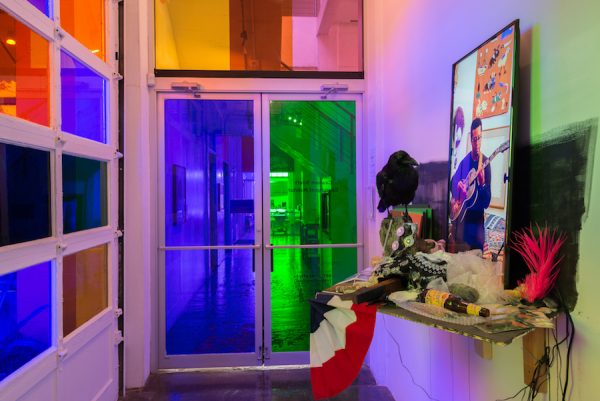 You can always count on the Artpace San Antonio residency shows to alchemically link together and find a common current between its three resident artists. The current exhibition is concerned with detail and clarity — of seeing things as they actually are. The three aesthetically disparate and dazzling exhibitions weave discomfiting truths into immersive landscapes. 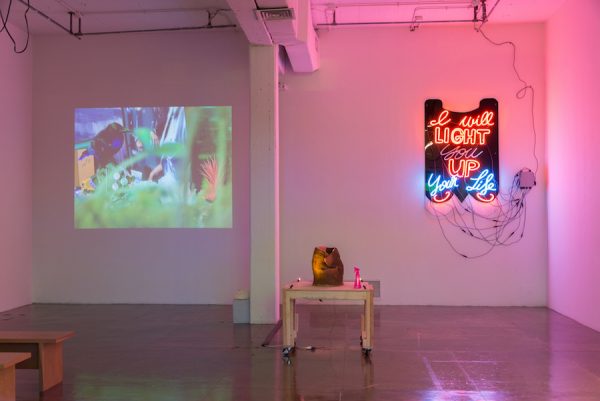 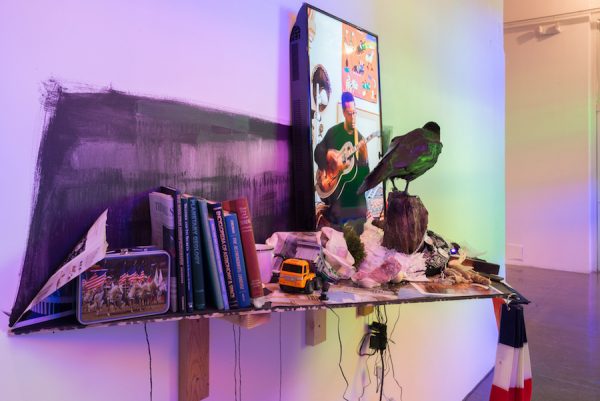 Cauleen Smith’s Contingent Habitat is the most immediately affecting of the trio. It’s a large array — from dioramas referencing Vermeer, to a video piece sequencing protest footage, with dancing and fish shoaling, among other things. The pièce de résistance is a neon sign that alternates between two phrases: “I will light you up,” and “I will light up your life.” The former is the line screamed by the furious white cop Brian Encinia against black woman Sandra Bland before he tackled her to the ground, cuffed her, and remanded her to a county jail where she died by supposed suicide. The latter is a reference to the 1977 Debby Boone song “You Light Up My Life” — which is a kind of apotheosis of whiteness. Debby’s father Pat Boone (star of Journey to the Center of the Earth and singer of schmaltz) was at the time, after all, a mannequin for manifest destiny. The flashing neon, shifting between the phrases, articulates the particularity of American fascism. The apparatus of the state does not only mete out racist violence, it also may stop you to issue a fake ticket. There’s a stark, intentional queasiness in Smith’s work; the violent cringe of its dioramas and videos flashes over the rest of the Artpace. Smith is unblinking. It’s all there, as if these objects are able to freeze a moment and bleed it out. 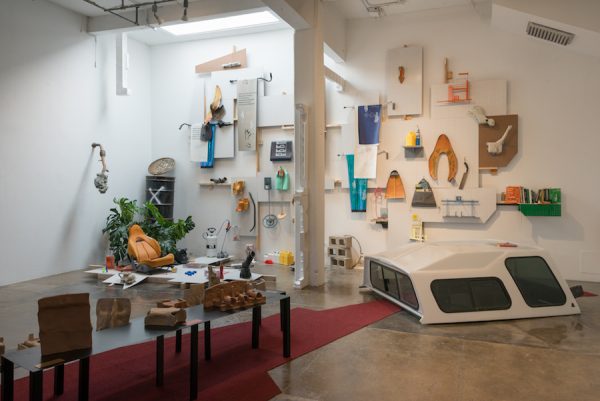 Emre Hüner’s exhibition, a Model is not a Map a Home is not a House, takes its title from Reyner Banham’s seminal essay, which asserts that technology is the crux of modern architecture in that it suggests form by creating new systems. In the gallery materials, Hüner includes this quote by Lydia Kallipoliti:

“What do space capsules, submarines, and office buildings have in common?

Each is conceived as a closed system: a self-sustaining physical environment

transfer of matter or energy. As partial reconstructions of the world in time

and in space, closed systems identify and secure the cycling of materials

necessary for the sustenance of life.” 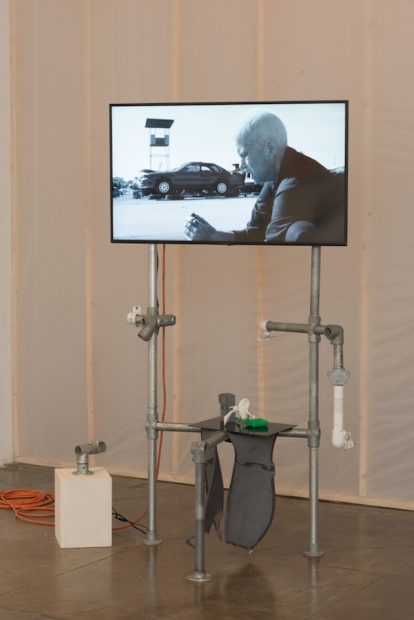 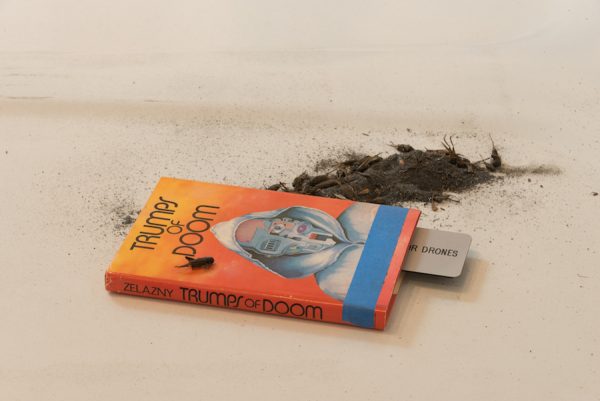 Hüner explores these discrete systems with a range of materials and items: a car seat, the camper topper for a pick up truck. Hüner explores closed systems within closed systems, a telescoping of the source materials, revealing a dizzying layering. A video depicts a character (played by the late, great Katie Pell) wandering through San Antonio while a voice-over reads esoteric texts like the United States Mollusca, Planetary Encounters: The Future of Unmanned Space Flight, and Controlled Environments for Plant Research. The effect is a kind of science fiction crafted from the everyday. Through Hüner’s particular focus on the materials — the sources — the technologies take on an alien strangeness. This is the future as it has always been. 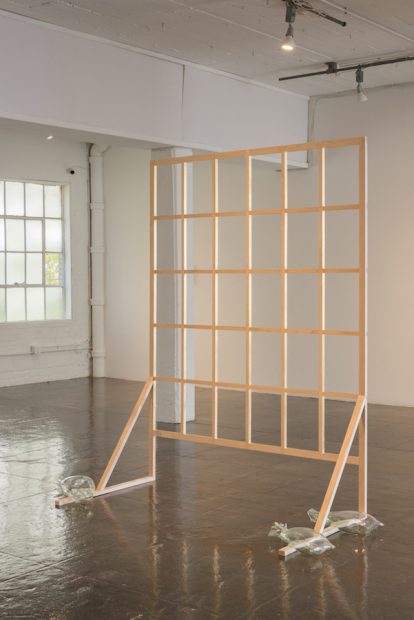 Jessica Halonen’s Sorry I Haven’t Written finds its genesis from a family discovery by Halonen. Her father had served in the Vietnam War, and like many veterans, rarely discussed his service. On a family visit, Halonen discovered an envelope containing military badges, a Christmas card, and a folded, detailed sketch of a helicopter. Halonen recreates these objects of memory figuratively and metaphorically through a mix of mediums. She crafts blown glass sandbags — a reference to sandbags used in war for fortification and protection, and the blurred, rounded edges of Halonen’s bags visualize the gauzy, sloping nature of memory. Halonen uses the windows on the second floor of Artpace to great effect; they frame and reflect the show. There’s a melancholic distance to these works. They represent a window into her father’s past, but necessarily trail off. There is only so much you can know of another, there is only so much that can be conjured and remembered. 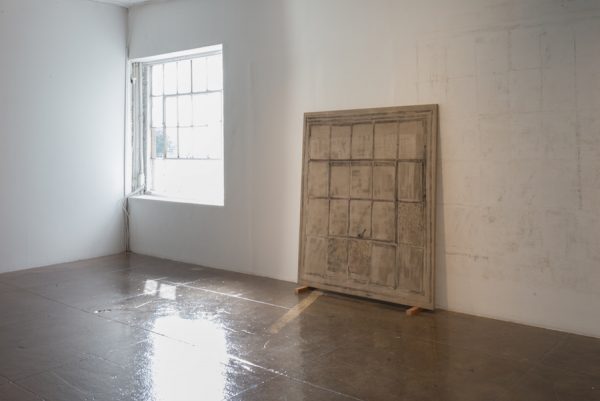 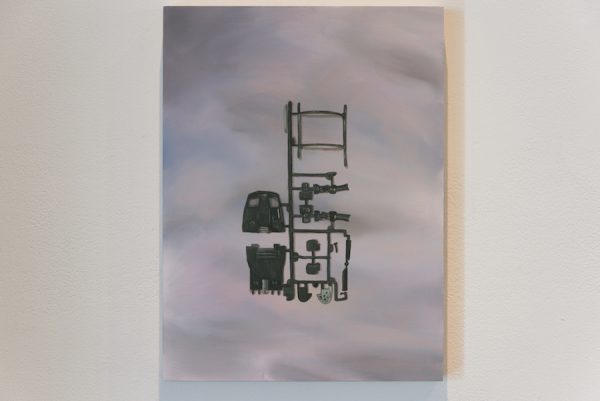 The three shows form a remarkably detailed and cogent meditation on power, spaces, and relationships. The lack of sentimentality does not render the exhibitions harsh, but more thematically tactile. The ideas and conclusions by the artists are physically embossed into the objects — the glass, neon, and metal are not models. It’s the map. It’s all the map.

Through Jan. 12 at Artpace San Antonio

Snapshots from the Artpace Teen Convening