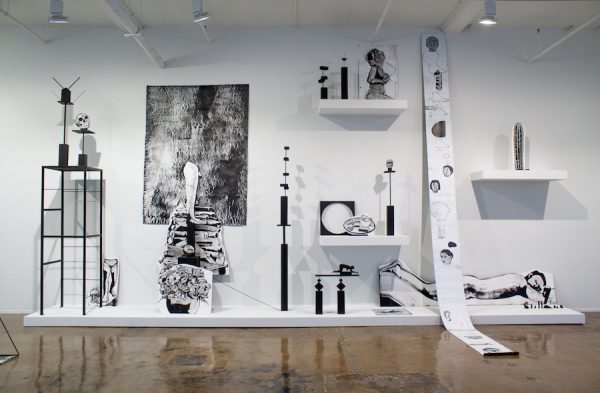 While watching her two boys play together one day, the San Antonio artist Joey Fauerso heard one say to the other, “You destroy everything special I make.” With her solo show Teardowns at Blue Star Contemporary in San Antonio, Fauerso extends the child’s play of building blocks to tearing down the fabric of American culture, but also the building back up of it again. The large-scale installation features video and performances amidst an alluring array of black-and-white painted canvas panels, cutouts, and shelving; there are also complex arrangements from a modular system of wooden blocks and other shapes that Fauerso rearranges throughout the show. Viewing all of her paintings and objects — gathered and stacked, turned on their sides, holding one other up, or fallen to the ground — feels like an archeological discovery, and the wonder that comes with seeing objects out of time. 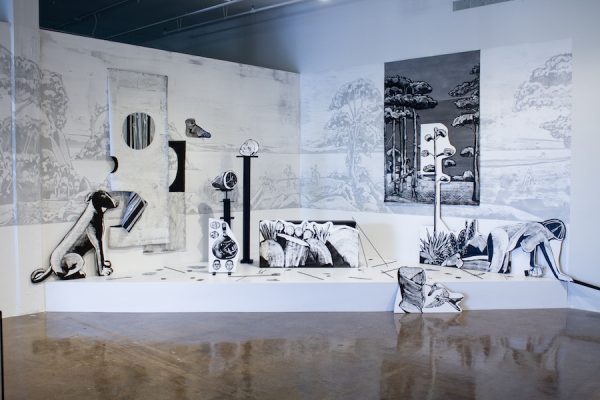 The monochromatic scheme signals another zone outside of the real: the realm of theater, with Fauerso’s art doubling as set and props. An artist and Professor at Texas State University, Fauerso has recently shown work at the Drawing Center in New York, and MASS MoCA, and has received multiple grants and residencies including the Drawing Center’s Open Sessions Residency and the Blue Star Contemporary’s residency at the Künstlerhaus Behanien in Berlin. 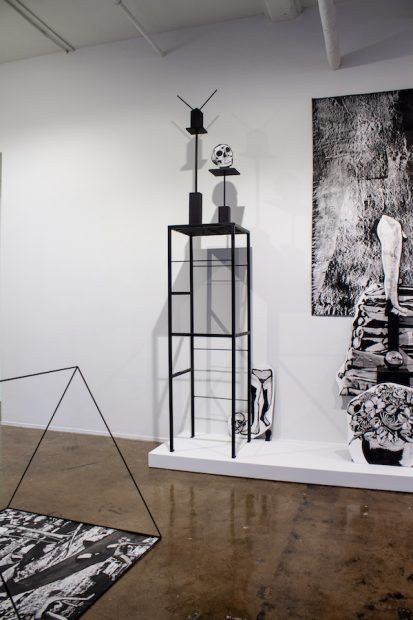 Only after taking in the elaborate beauty and formal complexity of Teardowns do Fauerso’s figures start to emerge — bodies stacked one upon another, or crawling through the landscape. These, and the funereal pyres made from piles of logs, add a somber, elegiac tone to the show. But there’s also humor in Fauerso’s video installation, and in the arrangements she makes —  a surprising mix of content including a skull laid on its side, dismembered legs, heads and feet; flora and fauna, such as a cat, a dog and cacti; vessels; and, bizarrely, hams. These painted images appear both cartoonish and hieroglyphic, a signature of Fauerso’s style. Their archetypal nature helps to ground Fauerso’s abstract themes of gender and the transitory nature of life. 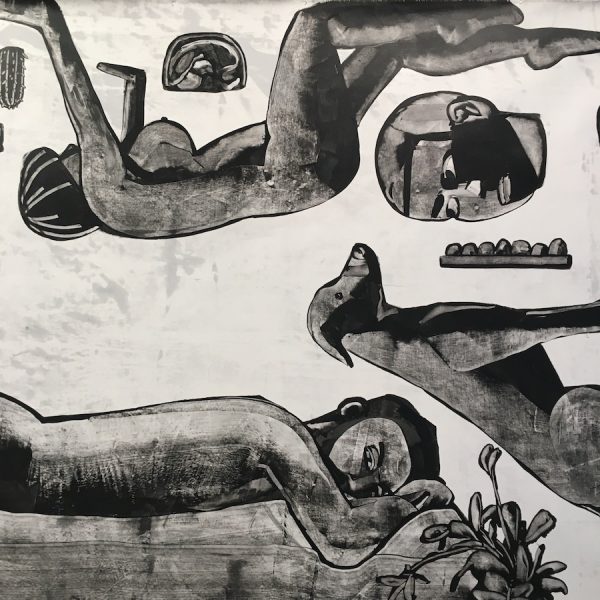 Fauerso switched from oils to acrylics after being diagnosed with breast cancer in 2014, and has since worked only in black and white. The technique, called subtractive painting, involves smearing the paint onto a surface and then manipulating it with a squeegee or rubber spatula in swift, deft movements, which means the application is instantaneous and unchangeable. Fauerso’s adeptness belies the difficulty of this task, so that her imagery appears almost readymade and graphic, in a digital or photographic way. For example, one large panel bears an uncanny resemblance to a black and white photograph of a lunar landscape. 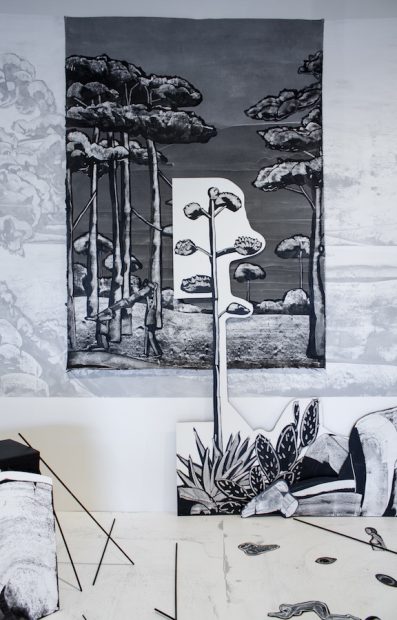 The anchor of Fauerso’s installation is a 50-foot mural inspired by the White House’s Diplomatic Reception Room wallpaper, Views of North America, installed in 1962 by First Lady Jacqueline Kennedy. The French wallpaper was originally designed in 1834, and includes scenes of Boston Harbor, West Point, Niagara Falls, New York Bay, and a natural bridge in Virginia. Depending on the era, these idyllic and pastoral scenes have inspired pride and nostalgia. In Fauerso’s version, the details are muted and greyed out, like an inaccessible field on a computer screen. 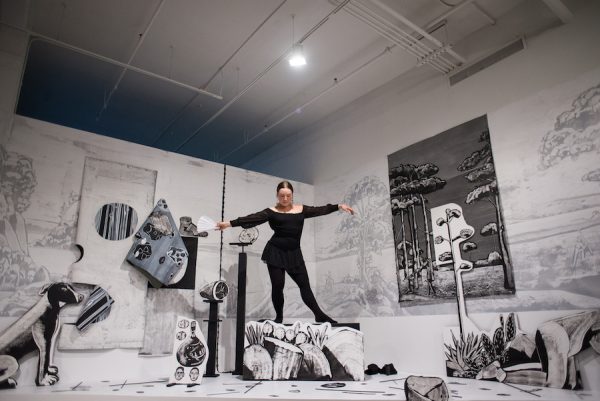 Two monitors display the performances that have taken place in front of the mural by male and female actors as well as musicians. The actors’ movements are trance-like, as if they’ve emerged from the wallpaper. They tear down the panels, rip them and use them for blindfolds, wear them as scarves and skirts or drape them over their bodies. With the presence of the body, the exhibit comes alive, calling to mind the many delicate-yet-solid boundaries between fact and fiction, as well as the idealized and the truth. 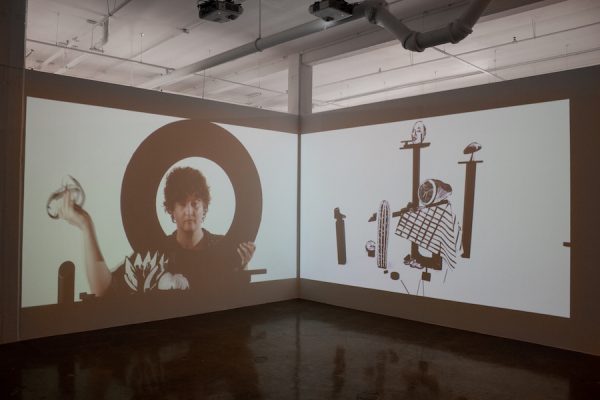 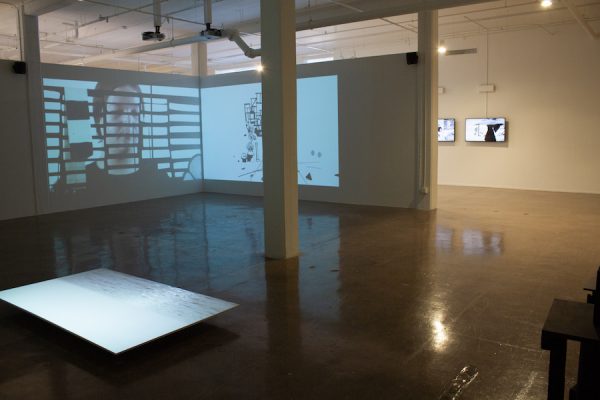 On a canvas panel in another large room, Fauerso painted a reproduction of a photo of Elaine de Kooning on a ladder, painting the presidential portrait of JFK. Across the room, a two-channel video is projected against the corner on two walls. One channel shows women within a black frame; the other shows more arrangements of black objects and cutouts. Shot against a white background, these arrangements look two-dimensional, until the women — at different points smiling, determined or furious — begin to dismantle their frame and throw the pieces at the arrangements, causing them to topple and crash to the ground. A halo-like black frame encircles (as if beatifying) one of the throwers — the late artist Katie Pell, who moves with a fierce and focused wrath, like a futuristic, renegade madonna. The targeted compositions feature more faces painted, according to Faeurso, in the image of “George Baselitz, who was famous for saying women can’t be great painters because they are not destructive; and also faces belonging to Carl Andre, Clement Greenberg, and Picasso. There are also several portraits of male politicians, all members of the Republican Freedom Caucus.” 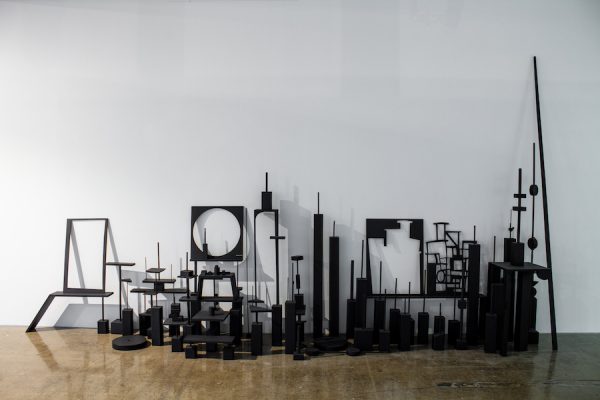 Another video, Attendance (2016), is projected onto a rectangular white platform on the ground; multi-channel black-and-white footage shows the waves of an ocean, glimmering and rolling, interspersed with the tiny hands of Fauerso’s sons hammering gently, or piling stones, or painting on their mother’s body, which lies supine and vulnerable to their touch, in an act of trust, like a pact was made. 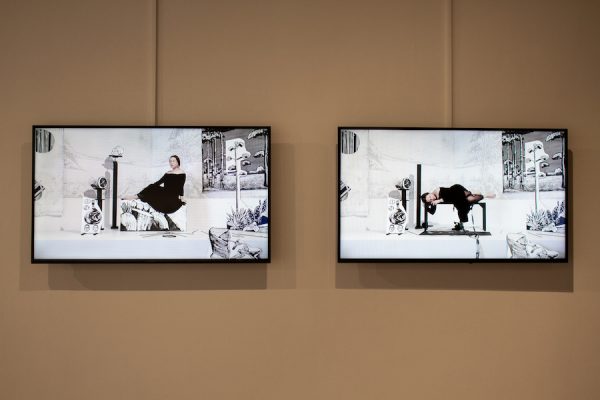 The large-scale grandeur of the work and Fauerso’s subject matter gives the viewer a God’s-eye view of things — a perspective that feels omniscient and timeless, yet the theatrical components remind the viewer that we are each playing our parts. In the videos and performances, Fauerso creates a ritualistic space in which to enact new possibilities for women to be more actively involved in art and history. The anonymous female bodies in her paintings contrast with the active women in her performances and videos, who destroy the structure in order the change it altogether.

Through Jan. 5, 2020 at Blue Star Contemporary in San Antonio. The artist Joey Fauerso will enact a final performance in her installation this evening, Friday, Jan. 3.

I love your creativity and wild imagination.